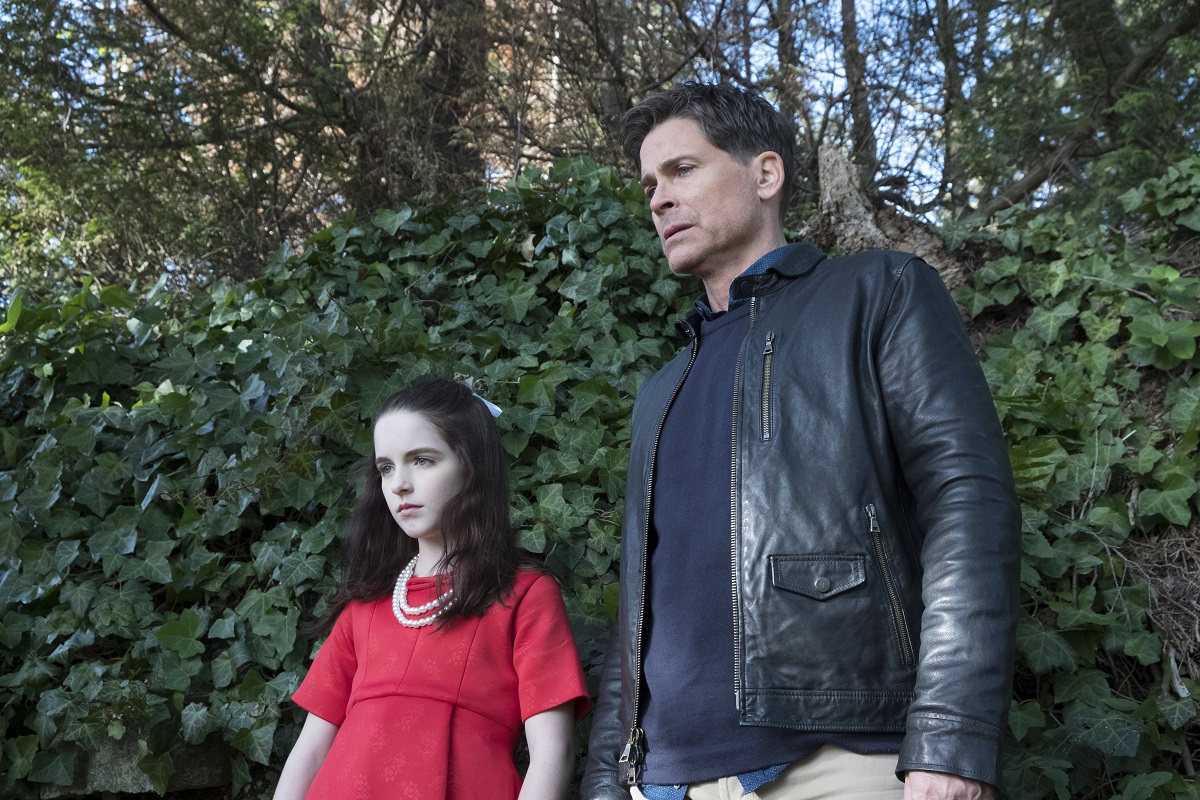 Lifetime Television has essentially built its brand around the woman-in-peril thriller, occasionally dipping a toe in what I affectionately call “prestige cheese”–films that stay on brand and cater to that thriller/peril model but elevate it with the production values and casting. The Bad Seed, debuting Sunday night ahead of the network’s next drama series, You (which also hews toward thriller), stars and is executive produced and directed by Rob LoweÂ in his first full-length directorial credit. He’s crafted a solid, genuinely creepy tale of a single dad who realizes way too late that his daughter is a Defcon 1 psychopath.

Nine-year-old Emma (Designated Survivor‘s McKenna Grace) is super duper Type A in a terrifying, dangerous way, which Lowe’s David just does not see until he can no longer not see it. Grace plays master manipulator Emma with pitch-perfect precision.

Emma meets her match with new babysitter Chloe (Aftermath‘s Sarah Dugdale). Chloe sees through Emma’s facade and pretty quickly calls her on it but miscalculates when she oversteps her place. Their relationship provides a better sense of exactly what Emma is capable of and how very little she feels anything, much less remorse about her misdeeds.

Screenwriter Barbara Marshall (Terra Nova) flips the script on the previous 1956 and 1985 filmed adaptations of William March’s book and Maxwell Anderson’s play, which focused on a widow vs. Lowe as a widower. There’s a fun nod to the 1956 film as Patty McCormack, who was Oscar nominated for the titular role in that version, appears here as a psychiatrist. Stranger Things‘ Cara Buono plays Emma’s Aunt Angela and Corner Gas‘s Lorne Cardinal plays Brian, one of David’s staff.

As an actor, Lowe balances his portrayal of a father trying to wrap his head around something that’s been fairly obvious to everyone else, protect his child–whom he’s now painfully aware is monstrous–and still somehow do the right thing. Widowed with a new baby, he became so laser-focused on building his business that he completely missed that his daughter’s next-level coolness, intelligence, and independence had dangerous ramifications.

Lowe nails all of that complexity in his performance and as a director, framing David and Emma’s wealthy lifestyle and stunning home as quiet and austere but not unloving. And there’s just the right amount of boogedy to the proceedings to make you worry about what Emma will do next.

I really enjoyed the movie, and I wasn’t quite sure ahead of time whether I was in for a campy wink-nod, but they all play it straight, to chilling effect. I grew up on 80s Lowe, when he logged several dramatic roles, and there is a moment of intentional levity with an Easter Egg nod to one in particular that gave me a giggle.

Even if you’re not in the mood for it tomorrow, bank this one on the DVR for when you’re ready for a thriller in the same vein asÂ The Good Son. It’s also a fantastic visual treat. Lowe makes the most of the familiar and breathtaking Vancouver-area locations that’ll be familiar to fans of producer Harvey Kahn‘s Hallmark movies (most recently Love, Once and Always).