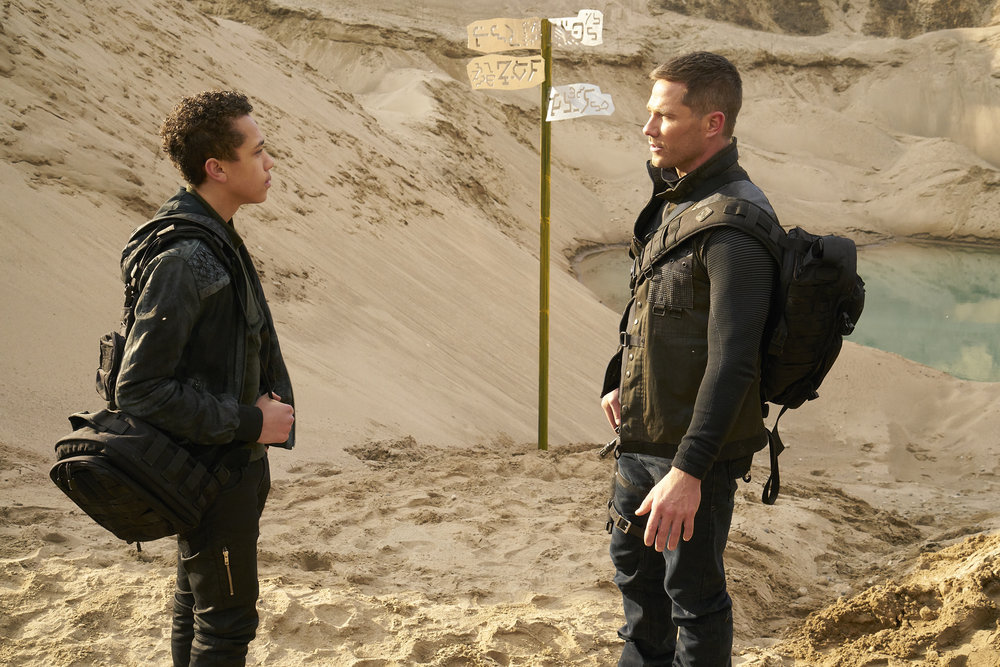 Friday’s new Killjoys, “It Takes a Pillage,” explores what happens when you have to go home again when you genuinely thought hell would freeze over first. D’av, Jaq, and Johnny find themselves back on the old Jaqobis (literal) stomping grounds and face-to-face with Jaqobis the elder (Ron Lea), which opens up all the angst you’d expect. On the flip side of that, Dutch and Zeph have an endearingly strange and stressful meeting of the minds that’s cathartic for them, too.

The episode was written by Derek Robertson and directed by X Company’s Stephanie Morgenstern. It’s full of long (and some not-so-long) overdue, necessary conversations that clear the decks so Team Awesomeforce and their extended tribe can buckle down in the run toward the season finale and, presumably, their fight with The Lady. It’s also a fantastic caper, similar to “Johnny Dangerously,” when simple plans instead come with unexpected wrinkles.

D’av is front and center in the episode, and when I visited the set in March, I sat down with Luke Macfarlane to chat about his journey this season, which involves unpacking a lot of that family drama as he figures out who he is as a father, a brother, and a partner.

Like his castmates, Macfarlane was over the moon to get a final season order. “The amazing thing is getting to finish the story the way we want to. As an actor, you kind of want to know and you kind of don’t want to know. You start to speculate a bit,” he explains. “It’s a joy to get to finish. I’ve been a part of five series and I’ve never had this privilege. It feels different. It’s a happy set. I anticipate tearful goodbyes. It feels really good. I feel really lucky.”

With Jaq part of the equation now, D’av is not only juggling his present and his future, but also his past, and we’ll see that in spades tomorrow night. “There’s a kid in the picture. I feel like this is a fair thing to say about D’av…he’s changed the most, when you consider where he came from and what his trauma was,” Macfarlane shares.

“And this is a continuation of that. It’s the wonderful sci-fi universe of having a boy who grows up in an episode and we just accept it. [D’av] is engaging with a different kind of self-protection and responsibility. The deep core of it is that he has to accept it. It’s different from [protecting] a brother [or] protecting Dutch, because she’s the most capable person on the show.”

“His parenting calls into question his relationship with Dutch. She had a different perception of parenthood because of Khlyen, so I think the real crux of this first season back is around how to parent and be a responsible adult to a child, that doesn’t perhaps involve teaching him how to use switchblades when he’s six.”

“It’s a really beautiful thing in the center of show. [What Dutch] wants to make [Jaq] is not what D’av wants for his child. I’m nervous that the fans are going to be a little [torn] because I’m challenging [who she is] because I don’t want that for my kid.”

“Hannah [John-Kamen] and I talk a lot about [where our characters are]. We’re figuring it out. The thing about D’av is that he tells Dutch the stuff she doesn’t want to hear. I think their relationship is built on that and they’re deciding if that’s enough to build a relationship on.”

Macfarlane loves that the show has created such strong bonds between Dutch and both brothers without ever falling down the rabbit hole of a love triangle that divides them. “The core relationship, the real love story, is between two friends…and how does [D’av] work into that. Dutch doesn’t come to [D’av] with her feelings about stuff. She goes to Johnny, [and their] competition doesn’t seem to be about [her affections]. That’s what makes this show so unique,” he explains.

“We take a lot of these tropes and [spin them]. It’s hard as an actor in TV because you’re so fixated on the tropes. You’re trying to figure out the universe and celebrate it and also understand it. Sometimes it takes a little longer. More so than any other show I’ve ever done, I’ve walked out of Killjoys scenes and [had the penny drop] later [about what we did].”

Killjoys airs Friday at 10 pm/9c on Syfy and Space Channel. The first seven episodes this season are online at both sites and on their apps. All of our Season 4 coverage is here. Here’s a sneak peek of “It Takes a Pillage.” Come live Tweet Friday!

Sinatra: All or Nothing at All [Preview]