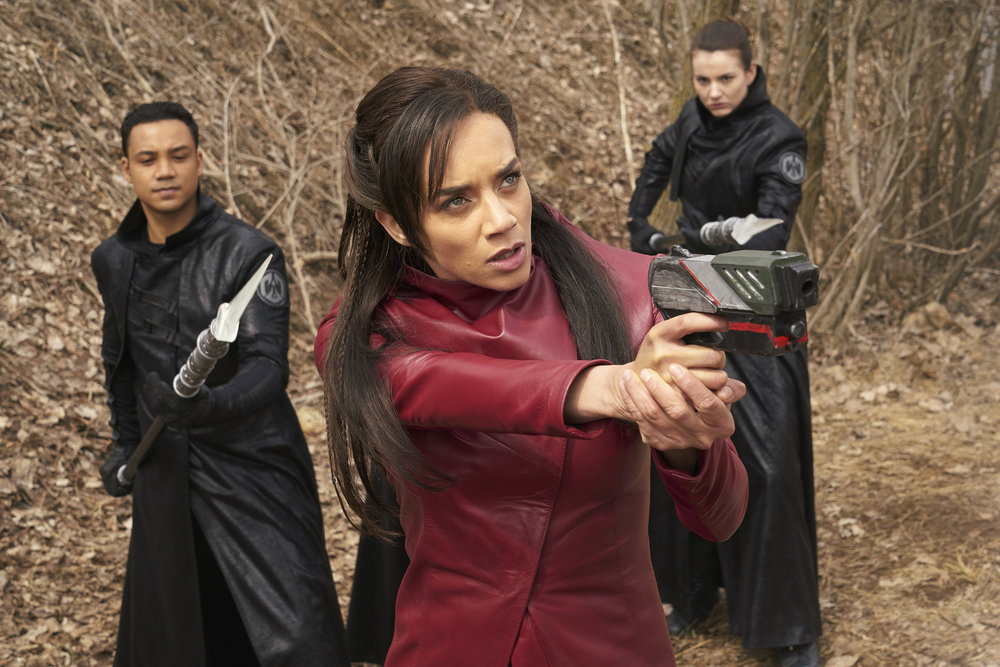 The past is prologue in the next new Killjoys. Dutch and Johnny follow a dangerous lead in pursuit of Khlyen’s planted memory, Turin’s heart grows two sizes, and Pree and Gared throw down to escape the Hullen-occupied RAC.

Johnny and Dutch commiserate over their D’av abandonment issues and decide to channel that into a more immediate task they can actually, maybe, accomplish when Johnny’s tracker leads them to a black hole that isn’t quite what it seems. While they worry about imminent death, Dutch finds herself feeling things through the Green again.

We also get a flash way-way back to when Khlyen was newly Hullen and Aneela was newly batshit Hullen. Called upon to explain himself by someone near and dear (Karen Glave), he can’t quite sell the Green as being worth it when it cost Aneela her sanity. The flashback does give us a softer side of Khylen and a glimpse of who he was when he was human.

Dutch has a variation on that same conversation in the present timeline, which tests her concepts of family, loyalty, and honor. Separately, Johnny and Lucy face a test of their own.

On the RAC, Pree and Gared are reunited, but getting free and back to the Armada aren’t easily done. Weej (Ish Morris) makes himself useful when a hilariously exasperated Turin tries to justify why saving two humans is a big damn deal. Pree and Gared also stumble onto something that I’m pretty sure will be useful down the line, but it’s Zeph who puts the pieces together.

Per usual, the whole cast is bang on, but Rob Stewart and Karen Glave just do really lovely work here (I’d seriously watch them together in anything), as does Hannah John-Kamen in all her scenes with Glave. Special shout out as well to costume designer Trysha Bakker for the costumes in this. Glave’s gown is just stunning.

Killjoys airs Friday at 10 pm/9c on Syfy and Space Channel. The first six episodes this season are online at both sites and on their apps. All of our Season 4 coverage is here.

If you’re in Toronto this weekend, Fan Expo will have two Killjoys panels–a writers panel on Friday afternoon at 4 pm in room 717A, and Sunday at 11 am, the cast and showrunners will be featured in a panel in room 701A.

Here’s a sneak peek of “O Mother, Where Art Thou?”

Who Do You Think You Are Preview: “Ginnifer Goodwin”

Real Sports with Bryant Gumbel Preview: “The Lords of the Rings”