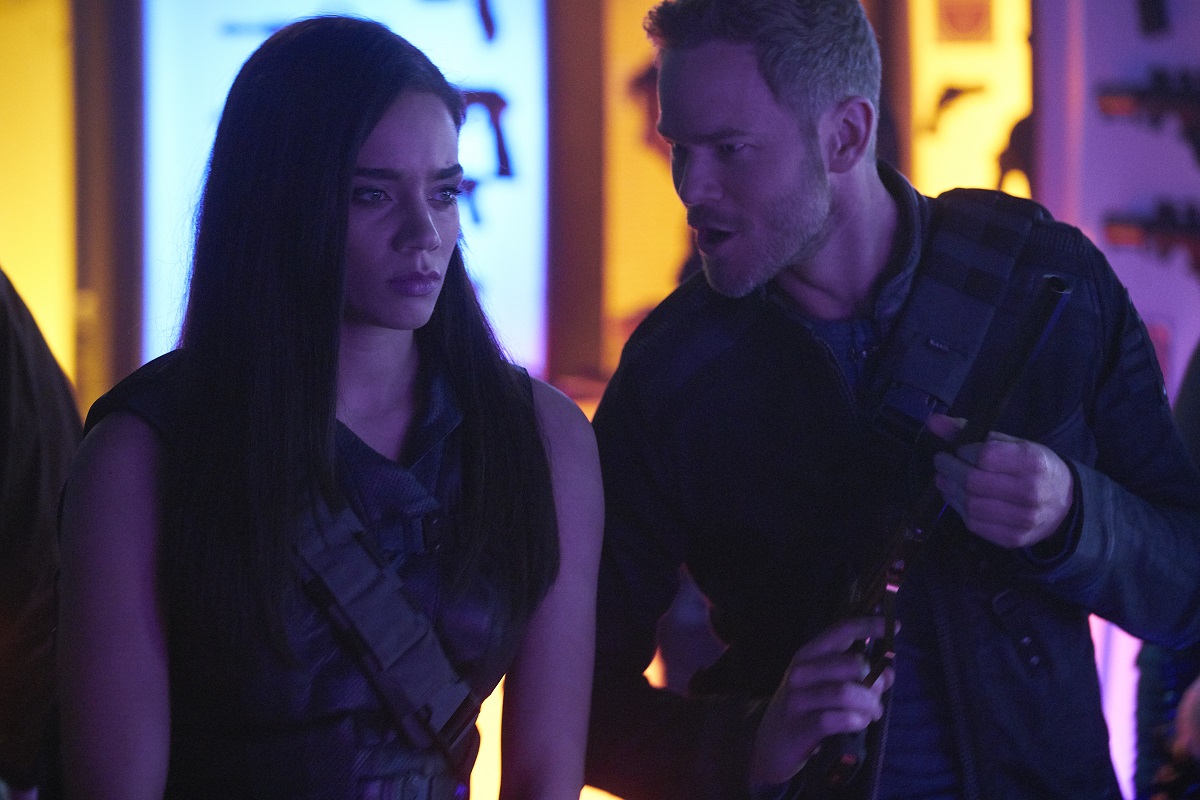 This week’s Killjoys picks up with the new arrival aboard Lucy and throws in an old-fashioned caper for good measure. “Greening Pains” was written by showrunner Adam Barken, and when we sat down to chat during my set visit in March, we talked about Season 4’s Big Bad in the Lady, the expanding Killjoys family, and how that affects the various relationships, particularly Dutch and D’av.

“The journey in greenspace is kind of over by Episode 3 but it has reverberations all the way through. The journey of the show [this season] is, ‘How do we get back and how do we fix what’s broken and the things we made mistakes with?'” he explains.

Adding a baby to the mix sprang from Mayko Nguyen‘s real-life pregnancy last season and turned out to be a fantastic gift onscreen, too. “We leaned into it, to be honest. Our feeling was, it was a lovely surprise when Mayko said she was expecting. You always have that choice where, do you pretend it’s not happening or do you lean into it and make it part of your story,” he shares.

“The more we talked about it, with Mayko’s blessing, we realized it could feed into the themes and stories that we were planning. This was always a show about family, so it seemed like a new member of the family was interesting.”

“We’re all sci-fi nerds and having listened to a few podcasts. I think some scif-fi nerds have figured out where we’re going. Is D’av going to be running around with a BABYBJÃ–RN? Probably not. The baby is an integral part of the show and to have as a good, scary plot point for the Lady and what she wants with him and what he was created for, and that plays all season.”

Last week’s episode was set almost wholly on Lucy, and the close quarters will continue. “This season, they’re on the run. Although we ended with a sense of a victory, it was short-lived. Once they’re all back together, they realize they can’t go back to the Quad,” he points out.

“They have to figure out how to fight back without any of the resources they would have normally had. They’re zipping about the J while staying one step ahead of the Lady’s forces. In the Quad, we have Pree, Gared, and Fancy doing their thing as the Lady’s plan becomes more important. It gives us a chance for a really great homecoming. We wanted to shake things up and do things differently…a voyage through the stars and meeting different people. It’s been a lot of fun.”

Dutch and D’av came back together at the end of last season a bit wiser and wearier after separately and together riding out some fairly extreme personal drama, so the second time around, it felt earned. Barken says we’re going to see an evolution of that connection now that there’s a child involved.

“The Dutch and D’av story has always been a a really interesting one. In Season 3, they were open to a deeper emotional relationship. We’re trying to lean into that [along] with the fun and the action [but] now with a child,” he shares. “Michelle [Lovretta] often says, ‘Let’s live in the question.’ So then, how do you [do that]? Dutch has never had any [desire] to be a mom and D’av never planned [on being a Dad]. Now throwing it into the mix, what does that mean?”

“Now we can explore their own childhoods and rearing and talk about issues of abuse and shame and guilt and hope and all of those things that are very present now. And also because of the stakes, it allows us to chart their journey and relationship and split it apart again and bring it back together based on these new stories. That’s been really satisfying to work on.”

We’re also keeping Delle Seyah and Aneela in the mix. “[Delle Seyah] is family now. There’s a connection there. She had a true, emotional, powerful connection to Aneela and that’s something we want to keep playing with and threading through,” he explains. “Nothing gets dropped. [With Hannah John-Kamen playing dual roles], we’re not interested in redoing Orphan Black or any of the other clone shows. We looked for a way to keep Aneela alive [on her own merits].”

“We’re hoping fans go with us on the journey. We never wanted to do the same season twice. How do we mix things up and change things and then where does that leave us for Season 5? Ultimately, this is [a show about] Dutch and her boys. As much as we love our supporting characters, and they all rise up, in the end it still comes down to the strange little story of our trio.”

Killjoys airs Friday at 10 pm/9c on Syfy and Space Channel. The first four episodes this season are online at both sites and on their apps. All of our Season 4 coverage is here. I’ll be back tomorrow with a proper preview of this week’s episode.