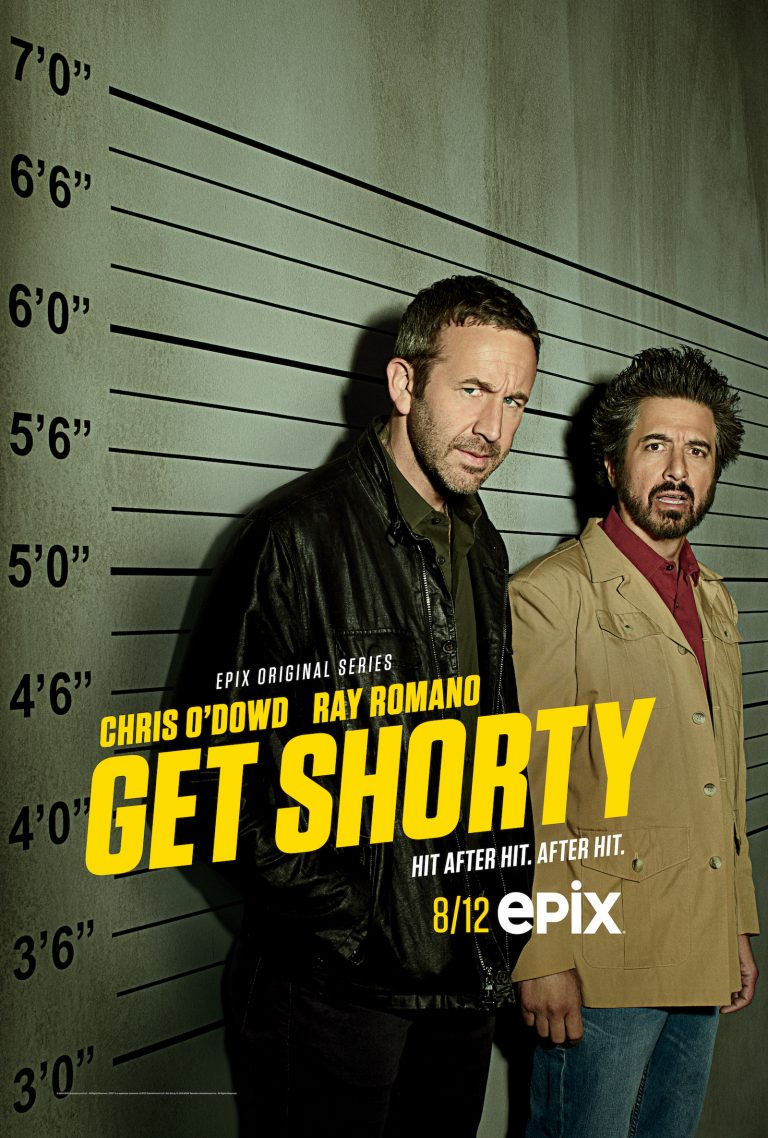 Get Shorty is back in (show) business, baby.

In Get Shorty‘s second season, we find out the fate of the movie that brought Miles, Amara and crew to Hollywood from the desert town of Pahrump, NV.Â Plus, there’s a trio of heavyweight actors set to make their LA lives even more interesting, and maybe even more dangerous: Felicity Huffman, Sonya Walger and Steven Weber.

TV Goodness ventured to the set of the EPIX drama where executive producer Davey Holmes and members of the cast filled us in on what to expect in the new episodes.

Things Get Even Darker for Miles

Davey Holmes: He’s in a super dark place at the top of season two. He goes through a lot of emotional journey in season two. He’s bottoming out completely. Because everything he worked in in season one has kind of went to s–t. So we’re trying to start him there and see how he handles that.

Chris O’Dowd: The marriage stuff isn’t going wonderfully. That’s a thread that keeps on going and it turns into a custody battle. And a bit of a Kramer vs Kramer kind of arc in the course of the series. And the huge creative impetus that he does have manifests itself into him finding a novel that he wants to adapt and make a film out of. Without giving too much away, it’s a post-apocalyptic tale of a girl who finds herself alone against the world. And he can relate to that. He can relate to somehow feeling like he’s under bombardment by those around him.

Holmes: We get more into Miles’ creative visions and some sort of more unconscious things he’s working through…spirituality…and we’re setting the stage as we move forward on the show and the exploration of story and how it affects our real lives and how a thug can come into Hollywood and through force try an enter a craft that requires inspiration and creativity and persuasion and self invention and all that.

Holmes: Felicity Huffman plays an FBI agent. At the end of last season, Rick became an informant so for this season, it felt like to be honest to the show they’d have to be hovering the whole time and there’d have to be real consequences. We felt like we had to have real consequences of the FBI hovering over this whole thing. So that’s the tension for this whole season is you’re seeing an investigation that’s progressive.

Amara Gets some Serious Competition in the form of…Sonya Walger

Holmes (Walger’s husband): Sonya plays the LA version branch of the franchise which is the cartel. They are more urban, more sophisticated, more sophisticated about the movie business and more corporate. Way more corporate. And they’re more powerful. They’re bigger. So we get to suddenly see the tables turn and Amara, since she’s staying in LA, she’s dealing with a bigger fish and she’s not used to that. So she’s getting pushed around right from the beginning of the season and hates it and doesn’t deal with it well. Doesn’t take it well.

Lidia Porto: With Amara, season two is more about her adjusting to Hollywood. Coming into the bigger pond, used to being the top queen and having someone bigger than her…finding her way, figuring it out. So it’s more like her bringing her greatness into Hollywood and then stretching it to try and belong in this bigger place. In season one, you see Amara outside the home and how she conducts business. And in season two, you see more of how she lives and that’s been great for me.

O’Dowd:Â I do quite a lot of work with Steven Weber this season and Felicity [Huffman], people who come in and who have such creative ways that they bring with them. My character works really well if it looks like he’s struggling against feeling intimidated. So having actors who have a reason to intimidate you is very useful.

New episodes of Get Shorty premiere Sundays at 9/8c on EPIX.