Killjoys Preview: “What to Expect When You’re Expecting…An Alien Parasite” 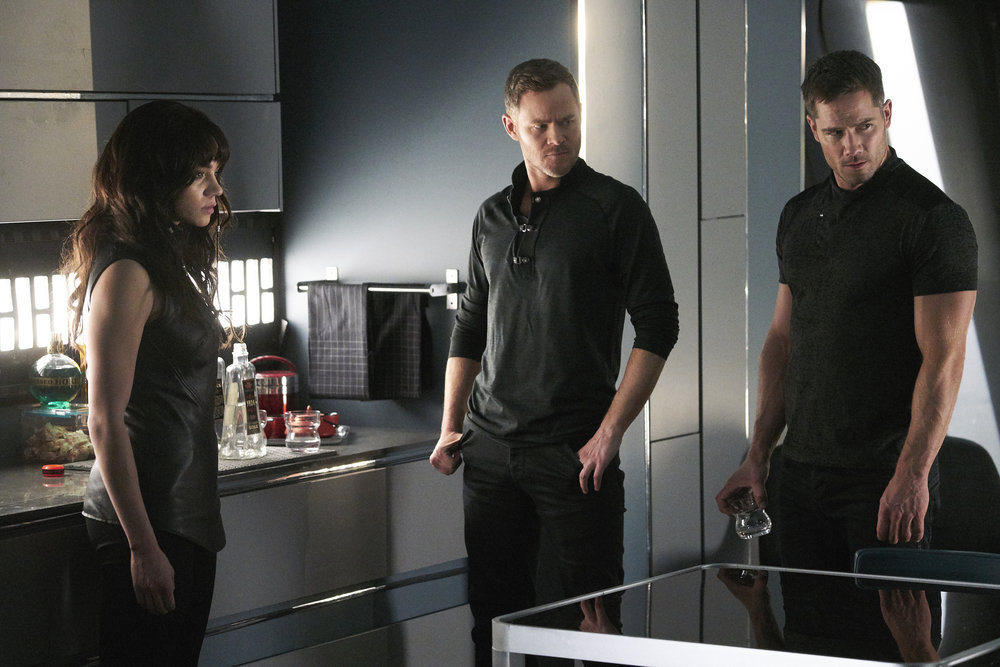 I am unabashedly ride-or-die about the TV folks I enjoy, and since Luke Macfarlane is the one who brought me to Killjoys, he’s the one I’m going to dance with right through to the end.Â I’m just over-the-top joyful for the work he’s doing this season. As I said in last week’s preview, he matched Aaron Ashmore‘s big and broad strokes with quiet, small moments that just broke me. The cherry on top is that the whole cast is just So. Damn. Good. And this week they all bring it.

As last week’s hour closed out, Delle Seyah’s water broke, so you can guess what a good portion of this week’s outing is dedicated to. But that’s just the beginning-slash-framing-device. Iit’s so much more than the arrival of the world’s strangest intergalactic test-tube baby. While that’s happening, Dutch is still mysteriously comatose and Johnny’s unraveling more and more by the minute.

There’s A LOT going on, and D’av is pulled in every direction trying to balance where exactly his priorities lie between his love, his brother, and his child. Kelly McCormack‘s Zeph also vaults into superhero nerd status, pulling off some AMAZEBALLS saves that I’m still unpacking a week after watching the episode.

Things play out against the ticking clock of an increasingly complicated Hullen delivery. Mayko Nguyen delivers (pun intended) every emotion and then some as Delle Seyah is alternately annoyed, impatient, terrified, and overcome. She has some terrific scenes with Hannah John-Kamen, too, when a Delle Seyah desperate for news of Aneela has to accept that somehow Dutch will have to do. She and Thom Allison also go toe to toe when Pree is just over it, and having the upper hand for a hot minute empowers him to say A LOT.

And then there’s Hullen Bonkers Johnny.Â It’s no big spoiler to tell you that Dutch does wake up at some point (see photos), and then the voice in Johnny’s head is standing there, flesh and blood in front of him, and he unloads both barrels on her about being left behind. Again. And then he overreacts. Again. Cue the masterful Zeph save.

There’s so much happening in this episode and as the clock counts down, you start to actually be afraid they can’t actually pull off what they’re sure as hell going to try to do, and then you remember it’s Killjoys, so of course, they will. But you’re gonna sweat it. And then you may get a little (a lot) misty.

We also get a glimpse of the Green and what Dutch went through and fought against, and that rightfully makes us nervous about Khlyen and Aneela. Yes, we’re caring about complex, semi-redeemed anti-heroes all over the place. Damn them. Nikolijne Troubetzkoy wrote the script, directed by executive producer Stefan Pleszczynski.

Killjoys airs Friday at 10 pm/9c on Syfy and Space Channel. In case you missed it, all of our Season 4 coverage is here. Come live Tweet! It’s a very good time. Here’s a sneak peek of this week’s episode.

VICE Preview: Who Will Win "Trump's Trade War?" No one.

For Each "Harvest" There Must Be Sacrifice in Castle Rock