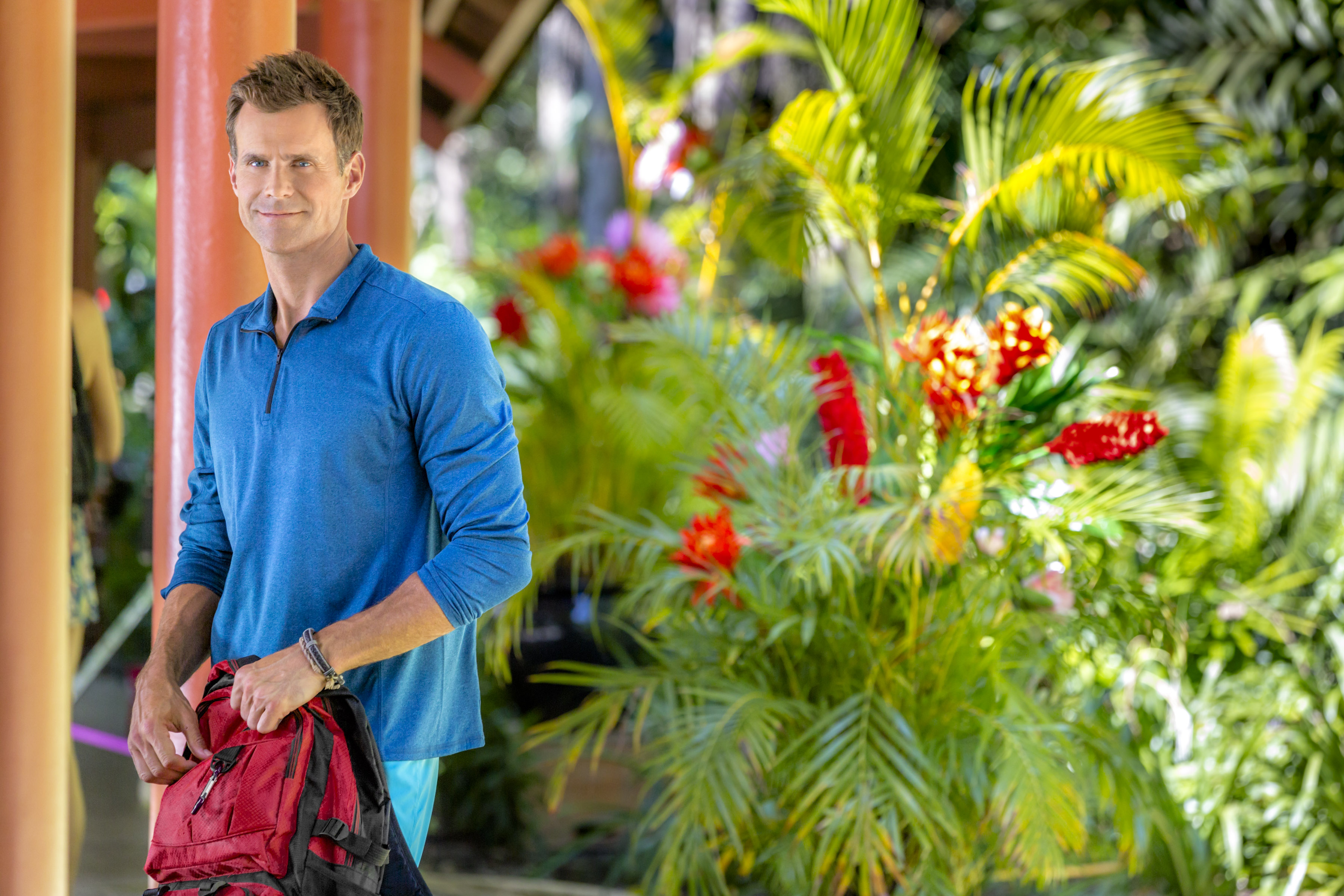 Catherine Bell and director Martin Wood, who paired up for last year’s Christmas in the Air, re-team Saturday night on Hallmark Channel in A Summer to Remember, a romance filmed and set in Fiji in which Bell co-stars opposite Cameron Mathison for the first time. I chatted with Mathison on Friday about the film and his newly minted role as the official co-host on Hallmark Channel’s daily lifestyle show, Home & Family.

A Summer to Remember casts Mathison as Will, the co-owner of a Fiji resort who finds his “don’t date the guests” policy tested when Bell’s ER doc, Jessica, arrives for a vacation with her teenage daughter, Ava (Samantha MacGillvray). Jessica is on the island for long overdue R&R, to recapture some of the joy she shared there with her late husband, and introduce it to their daughter.

When Mathison was first offered the role he thought it was a gag. “I got the e-mail and I though it was a Candid Camera thing, ‘Would I like to do this great script with Catherine Bell and Martin directing?’ Is this a joke? Yes!” he recalls.

Fiji is front and center and beautifully filmed. Mathison had previously visited with Entertainment Tonight to cover a season of Survivor, but this time he got to do a deeper dive around the island. “This was a whole different level,” he shares. “Spending about three and half weeks and really traveling around and getting to know the main island and having my wife come visit, it was a whole different experience.”

The film has a really nice ensemble vibe, and it’s a romantic drama where the leads have no rekindled history. It also skews a little bit older, with characters in their 40s for whom the table stakes are higher when they fall in love again.

That’s not a surprise, given that the script was co-written by Sheryl J. Anderson, who wrote last year’s Christmas Solo, which we loved a lot. She also created the UP series Ties that Bind, which we were big fans of. Her co-writer, Erinne Dobson, wrote The Sweetest Christmas in 2017 and One Winter Weekend earlier this year.

That mix of ensemble and maturity were a draw for Mathison. “I love that. I’ve always been aware of the signs that life is putting out for you and you’ve got to have the courage to take a chance and it might not be an easy thing to do,” he explains. “All the characters in this movie take a chance. Will taking a chance and moving out to Fiji and setting up life there. And [Jessica] does the same.”

“There were a lot of good messages. You want a script to have depth and dimension. There was our love line and the story of the younger ones. It makes it relatable and like real life.”

The movie does leave the possibility of a follow-up, but nothing has been discussed in detail. “We all would love to [do another one]. It sets up nicely for one and it would probably be tricky with Home & Family,” he points out. I also asked about the possibility of more Murder She Baked and he said there’s no change on that front from our last chat this past winter.

After 11 years on Entertainment Tonight, Mathison was announced at last weekend’s Television Critics Association as the new co-host of Home & Family alongside Debbie Matenopolous. While it might seem like the already slammed multi-hyphenate is picking up even more work, he explains that it’s a gig that will actually keep him at home more and he’s thrilled with that schedule change.

“I’ll be cutting back big time from ET. I’ll still be contributing over there, which is great, but this is now my main job. Everything Hallmark. I love going to work on Home & Family. The fact that it also shoots in town and that I’m home every day and can drop off at school and be home on evenings and weekends with my family…It’s a big bonus,” he shares. “I couldn’t ask for anything more.”

Before he settles into that new day job, he’s off to Winnipeg to shoot another film for Hallmark Channel with Kelly Rutherford called Love, Of Course that he describes as “a sweet little story.”

He doesn’t have a new Christmas movie in rotation for 2018 (yet) but points out that since he’s done a few over the years, you’ll still see him this holiday season. “You never really sit it out,” he laughs.

Nashville Season 2 Finale Preview: “On the Other Hand” [VIDEO]

The Alienist Preview: “These Bloody Thoughts”