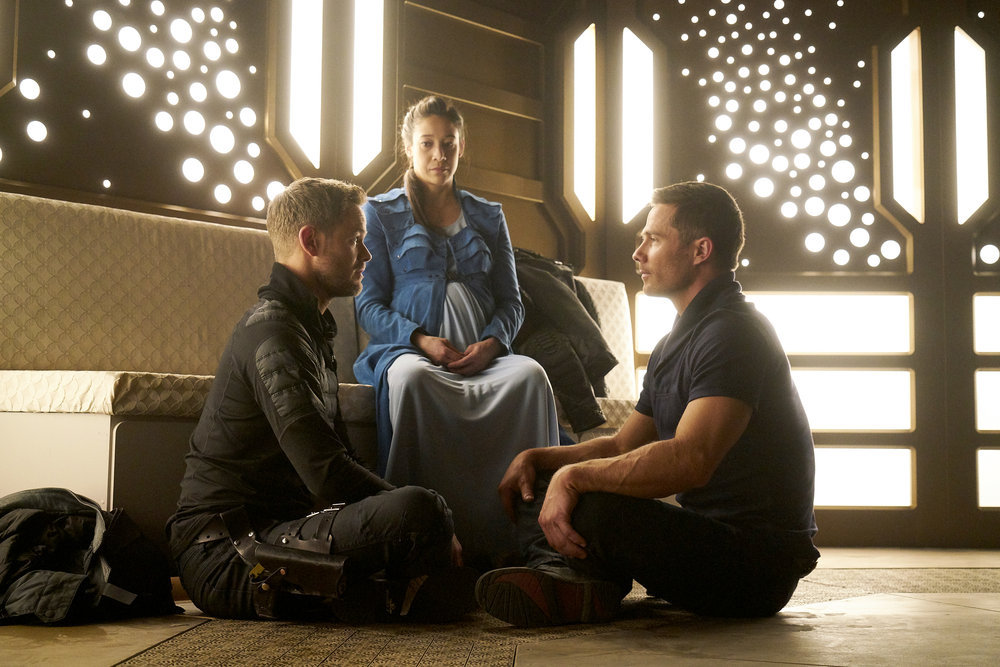 Bonkers is a strong word, but “Johnny Dangerously,” the second episode of Killjoys‘ just-launched fourth season, is exactly that–from the predicament Johnny, D’av, and Delle Seyah find themselves in, to how they work themselves (mostly) out of it. It’s also a rager of a showcase for Aaron Ashmore to go completely rogue. So. Much. Fun.

And that’s just part of the story. Back in the thick of the WTFery, we catch up with a Sarah Connor-esque Zeph (complete with a delicious mic drop from Kelly McCormack), who’s done her damndest to keep herself and Pip alive. The extended crew of Pree, Gared, Turin, and Fancy are also present and accounted for after managing their own situation with the Hullen.

Zeph is called upon to tap her new nerd skills to see what she can do about finding Team Awesomeforce, and Gared has a hysterical and surprisingly helpful suggestion of his own–to our and Pree’s delight.

But back to the growing Jaqobis family. The boys and Delle Seyah emerge from their abandonment in space only to find themselves in trouble as soon as they hit terra firma. When Johnny needs a medical intervention, things take a turn for the dangerous (hence the title) as D’av literally faces a kiss-or-kill dilemma about his baby brother.

And I think that’s all you need to know. There are terrific moments for the boys, both with and without Delle Seyah, who’s realizing she’s perhaps more than physically tethered to their fates. Look for a killer, quick vignette of flashbacks that reveal how they (sort of) buried the hatchet.

We also see a take charge side of Zeph that puts the “Don’t get scared, get nerdy” mantra of her mentor into extremely gratifying action. Samir Rehem (last season’s “Necropolis Now” and next week’s “Bro-d Trip” directs a script by series creator Michelle Lovretta. ICYMI Lovretta talked with me about last week’s premiere here and all of our Season 4 coverage so far is here.

Killjoys airs Friday night at 10 pm/9c on Syfy and Space Channel. Check back after the episode for my exclusive interview with Luke Macfarlane and Aaron Ashmore. Here’s a sneak peek.