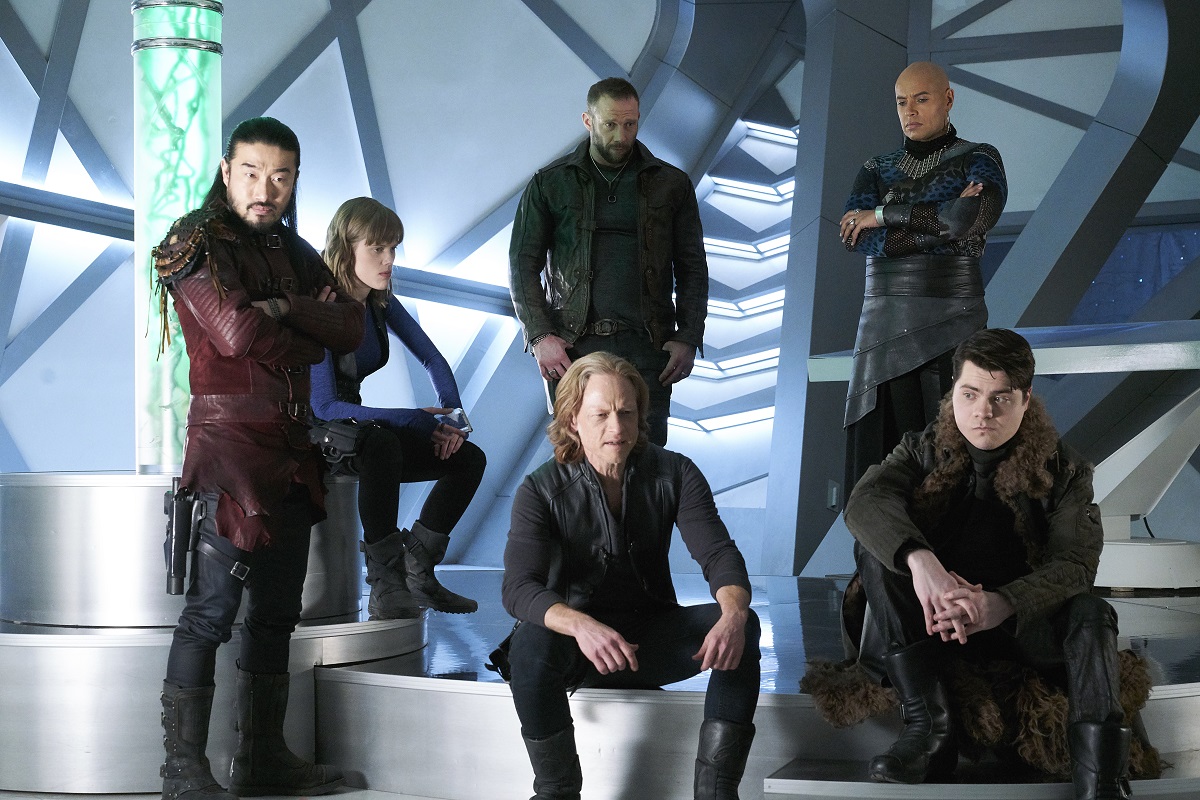 I’ve written before about Killjoys being a fantastic stomping ground for one-off characters who evolve into recurring roles or even series regulars. Last season, we were introduced to Pippin “Pip” Foster (Atticus Mitchell), a playboy fixer who was shanghaied into helping the team and then proved himself additionally useful. He’s back this season and figures heavily into this Friday’s new episode, which returns to the present timeline and brings the rest of the gang back into the action. I sat down with Mitchell during my set visit in March and we talked about his expanded role, what we can expect for Pip, and his not-so-side hustle of music composing.

Mitchell was hired for the Season 3 premiere last year and didn’t expect to come back but was thrilled to have the character evolve. “It was just a guest star, a one-off. Eventually one of the first days I was on set working, Adam [Barken approached me and said he thought it was going well] and the episode ended with the team saying I could be of further use to the them [and I was invited back],” he shares.

“In the finale, it was originally supposed to just be the one scene with Zeph and on that day, they asked if I had anything else going on and they [told me] I’d been written into more scenes. I kind of assumed then that I’d probably have more to do, and lo and behold, it happened.”

“It’s good to be a part of a project where your character goes through an evolution. You don’t want to do the same thing over and over again. It makes sense. [Pip] was a pompous rich kid who just loved to make money and doesn’t have a care in the world and buddied around with the wrong people.”

“Then, all of a sudden, all the right people in his life show up and suddenly he has all this responsibility. And that’s been really special to play, especially with this cast and crew here. It’s really nice to become part of the team, both literally and metaphorically.”

Mitchell says Pip will further integrate into the team but he’s not completely reformed. “We’ve been moving so fast. Pip goes though the wringer. There’s a lot that happens that he’s involved with.Â You will see probably at least one instance of him harkening back to his old days [referring to] the contacts still in his back pocket [but] he becomes pretty integral to the team and how that changes him is pretty special,” he explains.

We will see more of Pip and Zeph, and how their relationship develops after that Hail Mary hookup in “Wargasm.” “Kelly [McCormack and I] have developed a rapport. We’re kind of a team. Working with her and developing the chemistry, whether it’s an emotional scene, a funny one or quick, intense, suspenseful one, it’s been nice to work with an actress of her caliber and everyone else on the show,” he points out. “I find the way I learn best is to be in it and surrounded by it. The more challenging something is, the more I’m getting a reward out of it.”

Aside from acting, Mitchell has composed and published two EPs of his own music online and explains that the talents complement each other. “It’s a different kind of [being fed], coming from each. From a purely business standpoint and career standpoint, I have a lot of fun going from [acting] project to project,” he points out.

“But it’s been very important to discover that I have a meditative hobby that I’ve managed also to turn into a pseudo career, which is composing. I have a very good time doing both. Both are relaxing in their own right. [As a child], I wanted to be a drummer and my Mom said the only way I could do that was if I learned piano first and I eventually fell in love with piano.”

“It’s pretty amazing just the power of the Internet what it’s been able to give me. It was a flash in the pan idea and something I was workshopping a while. As soon as I decided I could do it, within a couple of days, everything was laid out for me and all of a sudden, it was on iTunes. It was pretty overwhelming. I can make it in my own home and then it’s hot and ready.”

Killjoys airs Fridays at 10 pm/9c on Syfy and Space.The Season 4 premiere is available online now at both networks’ websites and on their apps.