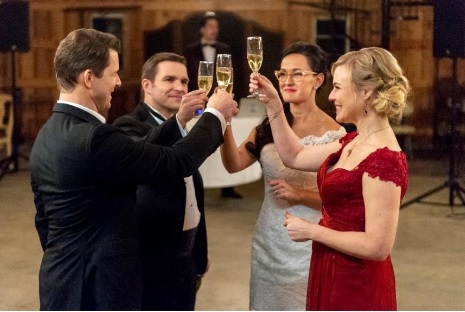 Signed, Sealed, and Delivered gets ready to walk down the aisle with Rita and Norman Sunday night on Hallmark Movies & Mysteries with its 10th film, To the Altar.

A bit lighter in tone than the The Road Less Traveled, the new film has a few wistful threads of loss and new beginnings throughout. After a parcel that passed through the DLO with some missed clues gets a second unrelated look from Shane that reveals them, Rita finds a kinship with the sender. Then the countdown to the wedding also becomes a countdown to reunite the lost package with its recipient and maybe the recipient with the sender.

As with the previous movies, the relationships among the core four are front and center, with some lovely callbacks to Rita and Norman’s families and their histories. Their impending marriage also reverberates to Shane and Oliver, who weigh their own relationship against that of their friends.

And there’s some levity, too, like when Oliver navigates best man duties with an assist from his Dad. The film is a lovely cherry on top of the sweet, sweet love story we’ve watched unfold.

Signed, Sealed, Delivered: To the Altar airs Sunday at 9 pm/8c on Hallmark Movies & Mysteries. Since the network is wrapping up its Christmas in July event, there is no prefacing marathon. Here’s a sneak peek.