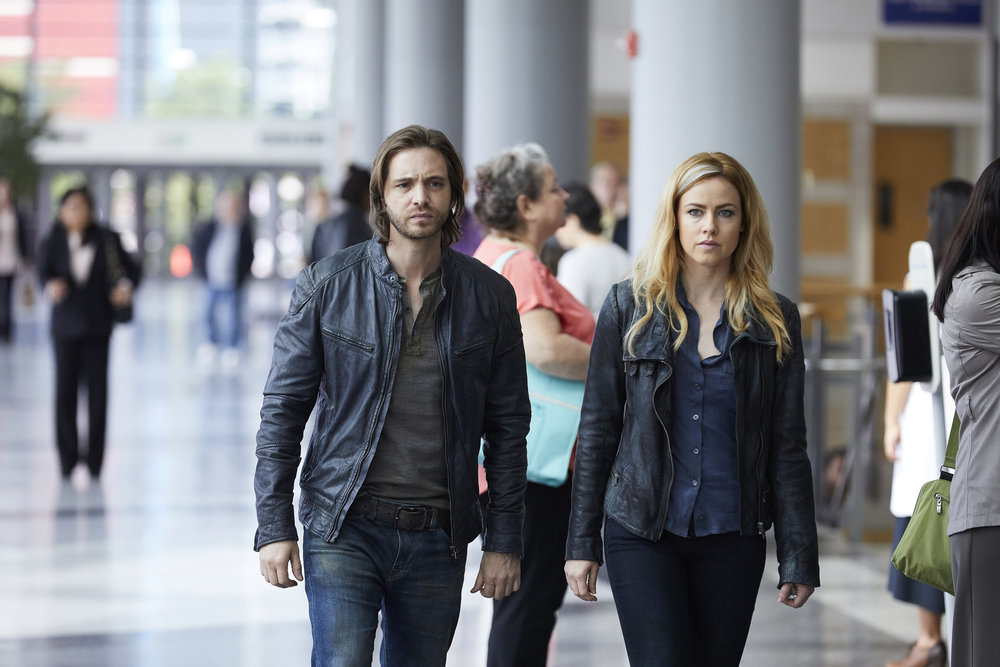 We’re just three days out from the last two hours of 12 Monkeys and this final season has been an emotional whirlwind, albeit at a much more manageable pace than Season 3. In the next part of my exclusive interview with Amanda Schull, we talk about the season through episode 6, “Die Glocke.”

Schull found the the Wild West episode, “Legacy,” thrilling for the physicality and the location. “That was a very fun episode. I had a few horseback riding lessons. I had never ridden a horse on camera, so that presented its own set of challenges and excitement in many different forms,” she recalls.

“At that point, we’d never traveled that far back. We all got to be cow men and cow women for a week or two. That was pretty neat. That was some pretty good stuff that they came up with. We shot in an area where there was a functioning old Wild West town outside of Toronto. They created that tent city in this huge open field. It was astonishing what they came up with.”

The second night of Season 4 found Cassie in a reset loop and presented her with a Sophie’s Choice in “After.” When she nearly loses Cole, she seriously considers for the first time whether to continue forward on the mission or acquiesce to the allure of the red forest so eloquently offered by Zalman Shaw (Christopher Lloyd). “It was a real brain teaser because there were two Cassies and I had to make sure I had my string diagram figured out so I knew where she was and when she was,” she says.

“[Christopher Lloyd] is magical. Every single take is different and unique and I didn’t know what he was going to do from take to take, in a wonderful way. With both episodes [last season and this season], he had these pages-long monologues and he was word-perfect every singe time. It’s just astounding.”

“It was really interesting and significantly disturbing. The art department did such a good job. There were enormous Swastika flags on the building and on the cars. Joyce Schure, our genius wardrobe designer, had an expert in all things World War II to help her decipher the uniforms.”

“She rented uniforms from all over Europe. There are uniforms for social engagements and going into battle. Everything was completely historically correct. Walking onto that set was a testament to the length and brilliance everyone went to for that episode. It was very upsetting as well because it was so believable.”

my favorite scene of the latest episode. the outfit, the song and cassie being badass @AmandaSchull #12Monkeys pic.twitter.com/a1UruAnnNT

“The reveal to Cassie’s undergarments weighed in the back of my mind the whole time we were in Prague because I was really enjoying the pastries,” she laughs. “We were staying in a hotel that made their own pastries and croissants every morning. Every single freaking morning when I’d go down for breakfast, they were presenting them to you. I was in hot anticipation of that scene being finished.”

The love story between Cole and Cassie has moved back to first position with these final episodes and will continue right through to the very end of the series finale. Schull says that part of their arc has been especially, personally impactful for her. “Every single episode has scenes that resonate with me and I’ve taken them with me going forward,” she explains.

“[‘After’] was very special to me and [‘Die Glocke’] for a number of reasons. In reading and performing [‘After’], I was really excited to see Cassie reconnect with Cole and to be able to exhibit Cassie’s love for Cole and just why she’s doing everything she’s doing. It all comes back to their connection.”

“In [‘After’], Christopher Lloyd presents this very enticing possibility for her and for the first time she realizes what that could mean, in his words, and she goes on that journey with him because he found her at just the right moment to hook her love and her desperation. And that will be something to continue going forward.”

“The desperation that she feels with [Cole] possibly dying…the idea of her living a life without him…is more than she can handle. What’s so wrong about living in the happiest moment of your life forever? Now she’s known the most traumatic, scary moment of her life, and she’s had a few moments [before it]–having her son taken from her and then having him sacrifice himself. If she can live in the happiest moments and not have any of the sickening, horrible moments, then why wouldn’t she take it?”

12 Monkeys concludes this Friday beginning at 9 pm/8c on Syfy. If you missed part one of my interview with Amanda Schull, it’s here, and all our coverage of the season so far is here.

Don't You Forget About Me: Thoughts on Those 12 Monkeys Final Season Reveals

INTERVIEW: Allen Maldonado Talks The Last O.G., Black-ish and His Everybody Digital App

Marvel’s Agents of S.H.I.E.L.D. “The Only Light in the Darkness”