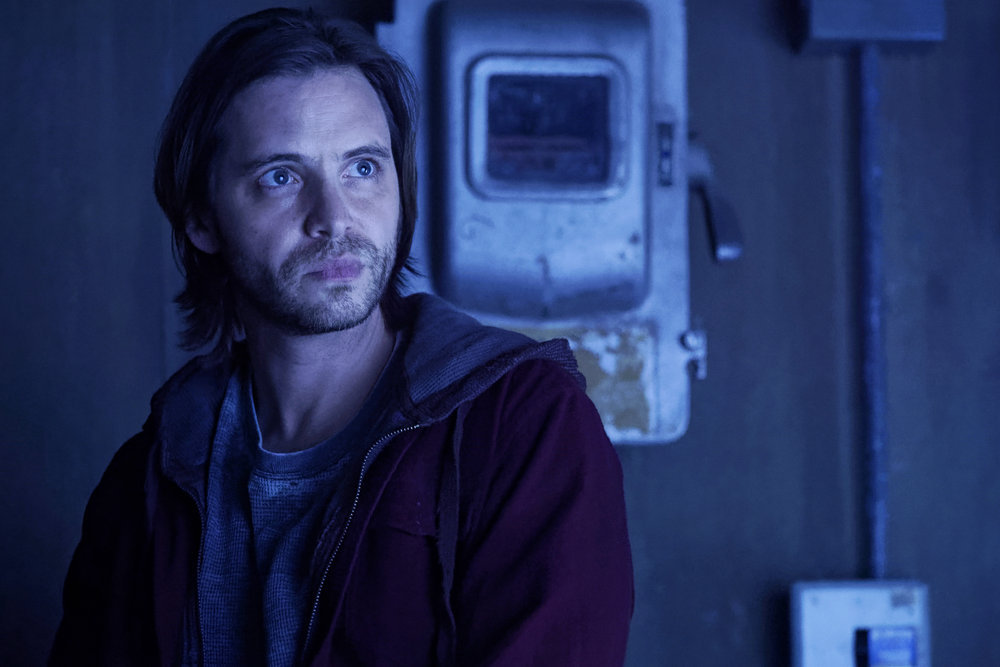 Aaron Stanford‘s James Cole has been our entry point into the world of 12 Monkeys and as these last episodes air, we’re seeing just how long a road he’s traveled on his mission to avert an apocalyptic plague, and the family he’s acquired in the process. This week, I spoke with Stanford about wrapping up the series and the role, and those neat “flashbacks” in Episode 2.

Similar to what his co-star Amanda Schull shared last week, Stanford says he met the news that this would be their final season with mixed emotions. “I was of two minds about it. I was really excited to bring the story to a close in a satisfying way and tell a complete story from beginning to end,” he says. “And obviously, it was a bittersweet experience to be filming these final pieces of the puzzle with these people who you’ve come to love in your life and you know this is going to be the last time you time the dance with them.”

Season 4’s second episode featured Cole and company shadowing the facility and that first splinter, and Cole had to pass himself off as an earlier self when faced with meeting Ramse again. Stanford says almost all of the flashback footage was new, with one exception. He got to that emotional place with Cole in those scenes because he had walked the path to that moment right along with him.

“The fight sequence where Cole and Ramse are in the old abandoned hospital and they find Railly’s bones, that was all from the pilot and shot in Detroit in the dead of winter and it had been cut out of the original pilot. We brought that back and used that [here]. The rest of it is all new. We shot all of it,” he explains.

“Bringing the gravitas and weight was a really natural process. It’s all there. We’ve been doing this for four years and I’ve grown into the role. We’ve also come to know each other as people and form genuine emotional bonds with one another. The roots of the characters have grown really, really deep in terms of story, how much you know about them and how much they’ve been built up.”

“You know their histories and what they’ve been through, You’ve been living through that and creating all that so it just naturally has all the weight to it, it brings them much more dimension and brings them to life. Cole being this embattled veteran and carrying the weight of history with him honestly was just there.”

When Cole rescues Jennifer on the train platform, he refers to himself as “future asshole,” and Stanford says he was given a few small details to backfill who that version might be (and showrunner Terry Matalas also Tweeted it was the last thing Stanford shot). “I was parceled out bits and pieces of vital information. No more than I had to know,” Stanford points out.

“Terry gave me a few choice details about what the future holds, which gave me a sense of where he would be coming from in that scene. As things fleshed out even more, and I read each subsequent script, obviously that came to life more and more.”

After playing the role four years, Stanford admits some of Cole’s bravado has rubbed off on him. “I think Cole really is a man of action and that’s most apparent is in his extreme distaste for plans. The man doesn’t like to plan anything out and rushes headlong into it,” he laughs. “If anything, I’ve seen that sometimes there is room for that, as opposed to agonizing or torturing yourself or over thinking of over analyzing things to death. Sometimes, it is just the correct thing to act.”

12 Monkeys airs this Friday from 8 pm/7c to 11 pm/10c. Click here for details on how the season will roll out. If you need to catch up, all three seasons so far are now on Hulu and last week’s episodes are on Syfy’s website.