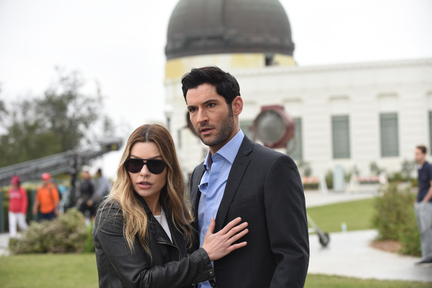 The origin of our favourite Devil lies in the pages of Neil Gaiman’s Sandman series where Mike Carey then picked up the torch and fleshed out the adventures of the first fallen angel in the City of Angels.

So casting Gaiman as dear old dad, aka God, in a re-imagining of our familiar faces is a feat of true divinity. The premise of this marvelous adventure is that Chloe’s father, John Decker (Louis Herthum, Westworld) never dies on the job, inspiring his daughter to quit acting to pursue law enforcement. Instead, her acting career flourishes as she takes on the starring role in a cop film series.

The knock-on effect of this one seemingly small change is hella-interesting.

Since Chloe never became a cop, she never met Dan and they never had Trixie (BOO-URNS). More precisely, he was never given the family that would motivate him to be a better man and a cleaner cop.

Charlotte Richards never stops being the high-powered attorney and, in fact, takes on Lucifer as a client, facilitating his expansion of the LUX club brand to a new LUX Las Vegas location.

Lucifer, of course, is himself still, running LUX, indulging in all the pleasures, projecting all his daddy issues on every father figure in sight.

Maze is not only still his right-hand demon, she’s recruited her own entourage of demons-in-training. Punishment is an art form in her hands.

Dr. Linda actually stars in her own therapy television show called Dr. Linda,Â influenced by Chloe’s own climb to stardom. Her sessions with famous patients are televised and when ratings dip, she’s forced to choose between her conscience as a practitioner and the sensationalism needed to stay on the air. She chooses poorly.

Poor Amenadiel has no guidance on how to handle Lucifer and has spent several years loitering in Los Angeles “like some sort of feathery homeless man” (as Luci puts it) having his powers “borrowed” whenever Lucifer wants to slow down time. He can’t break the training that angels shouldn’t mingle with humans and that leaves him awfully lonely.

They are all drawn in to meet and mingle when Lucifer finds a dead body in LUX in the morning. The victim is one of Chloe’s stunt co-ordinators and a good friend, Stryder Novac (Rocky Myers, Confess).

Detective Dan is sent in and decides quickly the victim died in a bar brawl. Lucifer thinks he’s an idiot (some things never change) and takes the murder weapon to Ella because it looks like a car thing.

He heads to the NASCAR track where the victim was supposed to begin work that week. The driver he was supposed to replace, Rex Wilson (David Meunier, Justified), is in the middle of a practice run on the track when Lucifer steps out in front of the car and wields Amenadiel’s slo-mo power to remove Wilson from his car.

He doesn’t get a chance to question him because Chloe grabs him first and then interrogates him in his trailer using lines from one of her movies. Lucifer blows her cover but does his “What do you desire” thing to discover that Wilson wanted to retire and was actually managing his replacement.

Lucifer and Chloe join forces as the trail gets a little warmer, leading them back to the set of her movie where she points Lucifer in the direction of one of her co-stars who had a beef with the victim. “Do your thing,” she says. A monkey with a highlighter could’ve called the misunderstanding that ensues.

While she’s waiting outside the trailer, Lt. Decker shows up to admonish his daughter for impersonating a police officer in her Nancy Drew shenanigans. A very rumpled Lucifer emerges to take Chloe’s side against her father.

Although he didn’t follow her instructions as she intended, Lucifer does manage to eliminate Erika as a suspect and pick up another lead from her pillow talk.

That takes them to Griffiths Conservatory where the other stunt coordinator, Ben Rogers (Brian Tee, Chicago Med), is about to take off with a $6 million dollar car once driven by James Dean.

The take-down has all the classic Lucifer elements. Lucifer freaking Rogers out with his immunity to bullets, flashing a little devil-face to freak him out more until he was probably relieved to be knock unconscious by a pipe-wielding Decker.

Chloe’s dad shows up and despite Lucifer’s immediate hackles rising, he and his daughter share a real moment of tenderness.

In the B plot, we have a wonderful finesse of closure. Dirty Cop Dan and Crooked Charlotte get into bed together (figuratively, at least to start with) in order to rob Lucifer’s safe (combination: 6-6-6 btw). Despite Charlotte getting caught by Maze and her mini-Maze squad, they manage to drive off into the horizon together. It’s a bittersweet happy ending for the morally corrupt versions of these characters. But at least they get that.

If this proves to be the last we see ofÂ Lucifer, I have to say it was a stellar episode to end on. Innovative, funny, and with a fresh take on the characters we’ve seen evolve and grow over three years, there’s very little I could ask for to improve on an episode narrated by God himself.

Marvel’s Agents of S.H.I.E.L.D. “The Only Light in the Darkness”