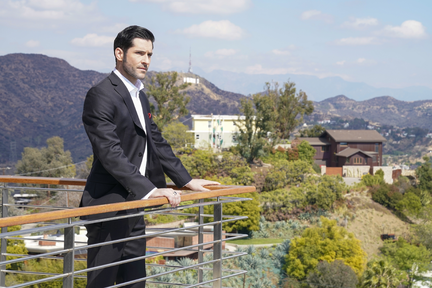 I’ve never been a fan of two-parters or cliffhangers but theÂ Lucifer team manages a real feat with this penultimate season episode. It’s a solid return to form for a show that’s wobbled a bit this year.

There are real emotional risks taken, a powerful double baddie bagging, and a satisfying dose of Ella which brightens any episode.

To Linda’s eternal frustration, as soon as the engagement to Pierce/Cain is called off, Lucifer pulls out of his plan to reveal his true feelings for Chloe. His reasoning is that by choosing NOT to marry Pierce, Chloe implicitly chose Lucifer but he doesn’t plan on testing that theory by leaving himself emotionally vulnerable. You know, for someone who ruled over the souls of the damned, Luci’s a real wuss when it comes to his own desires.

The murder of the wife of a high-profile ex-ball player, Forest Clay (Doug Savant, Melrose Place) brings Lucifer and Chloe out the crime scene where Lucifer puts an inordinate amount of effort into recreating the “Deckerstar” highlight reel.

All his “good ‘ol days” nonsense manages to do is annoy Chloe who eventually asks him if he’s trying to ridicule their history together. A valid perspective and one that sets our devil back on his heels a bit. Even Trixie tells him that reliving experiences exactly as they unfolded before isn’t fun.

Deckerstar aren’t the only ones feeling their past creeping up on them. Charlotte has been having the same Hell-loop nightmare since returning to her body and when she sees Forest Clay in the police station, she immediately informs Lucifer that Clay is one of her nightmare figures.

When Clay is cleared of his wife’s murder, Charlotte persists in her own investigation. She and Amenadiel visit her old law firm to double-team her old partner, Ben Wheeler (Colin Egglesfield, Rizzoli & Isles) and pull Clay’s file of non-disclosure agreements which hide his history of violence towards women.

Speaking of violence, Maze does her own persisting in her pursuit of killing Cain. Cain’s ready for her though and explains that he wants to get his scar (and thus his immortality) back. His plan: kill an angel. Her part of this plan: bring him Amenadiel.

It was a relief to glimpse a bit of the old Maze back when she pulls her punch (or rather, her syringe) out of affection for Amenadiel’s sincere declaration of friendship for her. Cain isn’t too impressed with her humanity, as it were, and knocks her out with her own needle and heads out to victimize the angel on his own.

The greatest strength of this episode is that all our major players get story elements worthy of them for the first time in a while. Espinoza’s relationship with Charlotte has progressed since he declared his love for her and we know it’s mutual because he’s become a part of her recurring nightmare, indicating his value to her happiness.

So when he orders her a waffle-maker AND a waffle charm bracelet to commemorate their relationship, it’s goofy and sweet and incredibly significant.

And we finally gets some truth-speaking from our Deckerstar as well. Chloe comes to terms with her feelings for Lucifer by using Ella as a sounding board. When she verbalizes that Lucifer was both the reason she said yes to Marcus AND the reason she realized she couldn’t marry Marcus, it had to be the singular moment of clarity for her poor muddled character all season.

While Lucifer is wrapped up in his misty, water-coloured memories, Detective Decker is running at full power, solving the primary murder which turned out was an accident as the killer was trying to kill Forest Clay.

But when Chloe lands Forest Clay’s arrest (for the murder of a previous mistress) with the help of Charlotte and Clay’s current mistress, Mia Hytner (Emma Bell, The Walking Dead) but WITHOUT his help, Lucifer recognizes that he has to move forward with the relationship, not look backward.

And finally, finally, FINALLY they come together in an honest and sincere moment with him confessing his devil-ness and her professing that he could never be that in her eyes and THEY KISS.

But we don’t get our happy moment without a price. Charlotte and Amenadiel are meeting at an isolated spot above the lights of Los Angeles to discuss their personal sense of moral worth when Cain arrives and takes his kill-shots at Amenadiel.

Charlotte hears the gun cock and jumps out in front and takes two bullets in the gut. Amenadiel no longer has the time-slowing power he wielded in the past and can only hold her as she passes with the promise he won’t leave her to die alone.

He does her one better though. Having suspected earlier that the loss of his wings was his own doing, he regains them as he holds her soul tight and flies them both home to the Silver City.

And, as with every passing, those left behind are the ones that suffer. Dan’s sorrow was probably the most heart-wrenching and the moment the camera paused on Charlotte’s wrist and the waffle charm was poignant enough to bring a tear to my eye.

Rest in peace, Charlotte Richards, your redemption is complete.

Which leaves only the punishment of Cain to resolve in our finale.