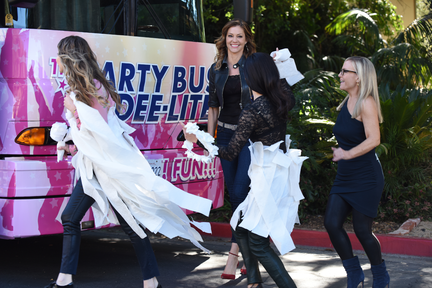 Things move quickly in Lucifer-land these days. Chloe no sooner agrees to marry Pierce/Cain than they set a date for a mere three months which kicks Ella into high gear to throw the ultimate bachelorette party.

The guests are working at cross-purposes though since Charlotte’s looking to break the engagement for a “higher” cause and Maze needs Chloe to be fully committed to matrimony. The great twist on Maze is how she goes about making sure the bachelorette is complication-free. No booze. No babes.

Meanwhile, Lucifer suddenly gains a promotion within the police force when he teams up with Espinoza in order to channel Decker and figure out why she would get engaged to Cain/Pierce.

The case is the murder of a show dog owner, dead of blunt force trauma which rules out the purebred Mastiff as the killer.

Espinoza isn’t super keen on being cast as the stand-in Lucifer as the real Lucifer plays the role of Detective Decker. However, in a weird way, it works.

Dan rolls into the Lucifer role awkwardly at best but he proves he’s actually a pretty good cop. I’m super confused as to how Lucifer suddenly has the authority to call a S.W.A.T. strike but he IS the Devil.

The world of dog shows is cutthroat in the extreme so when it turns out that the missing Mastiff is pregnant with highly-prized puppies, the suspect list narrows down to those who knew about the litter-to-be.

That brings them to Dr. Valerie Haynes (Victoria Platt, Star-Crossed) who stymies Lucifer when she responds to his trademark inquiry with the fact she’s pretty darned satisfied with her life as is, thank you very much.

Dan notices the collateral response from Haynes’ assistant and zeroes in on her as the doggy-napper. She’s not their killer though, just the one who wanted to sell the puppies.

When the deceased’s husband, Fredrick Hoffmann (Eric Nenninger, One Day At A Time) comes to collect the dog, Espinoza’s spidey senses get tingling and he pulls a total Lucifer move and shows up in Hoffman’s hotel room to confront him.

Unfortunately, it maybe slips his mind that he can’t shrug off bullet wounds like Mr. Morningstar so it’s good that Lucifer manages to piece together some clues to come to the same conclusion and rides in to save the day.

And this all leads Lucifer to the realization (somewhere close to when Chloe realizes it too) that Decker is marrying Cain/Pierce in order to have stability and someone she can count on.

Of course, while all this is going on, Cain is coming to some new realizations himself. He breaks his deal with Maze because he no longer wants to die. She’s not exactly cool with that.

And when Amenadiel points out some of the drawbacks of mortality, Cain decides that he’s truly all-in on this new “in-love” thing.

So when Chloe makes her way home from the party bus, sadly bereft of the pole-dancing water polo team Charlotte invites aboard, he offers to elope to make that transition even easier.

And then, as quickly as she said yes last episode, she sends him packing here.

I THINK Chloe’s motivations have been explained but, honestly, I have a hard time buying it. What’s worse is that all that channeling and detecting that spurred Lucifer’s epiphany seems to have been for naught as he chucks any opportunity to be honest with her as soon as he finds out the engagement is off.

Which leaves us with a grumpy-looking Cain glowering as his best detective duo heads off to solve crime and save the world.

As much as I enjoyed the girls gone wild element of the bachelorette and all the sudden exposition provided by Maze and Cain, this long-arc has lacked the cohesion and tension of last season’s Mamma God plot and I feel like we’re left spinning our wheels a lot.

As I said at the start, things are moving very quickly but not always with understandable purpose. The writing just hasn’t been as tight as it has been in the past.

And, quite honestly, I miss the relationships that the series had built up over the first two years. The only one I’m really rooting for at this point is Charlotte and Espinoza because they both deserve some happiness.

Although Maze and Charlotte intrigued me a bit at one time.

Moment of Heartbreak: Athelstan is Crucified, Vikings “Eye for an Eye”

Merlin “A Lesson in Vengeance”