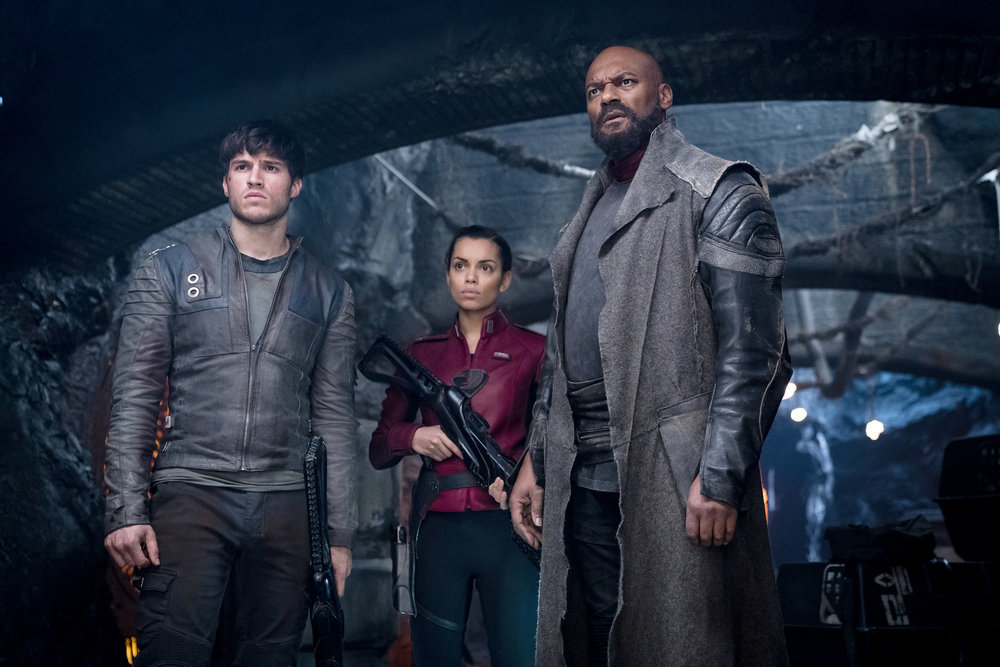 So I’m obviously a little slow on the uptake these days. Despite the Commander revealing in “House of Zod” that he is Lyta’s future son, I was still taken by surprise when Adam Strange pops up and identifies him as THE General Zod from the Superman timeline.

The action was very divided throughout this episode. After the teaser, we start in Kandor with Ona and the Voice of Rao/Brainiac (Blake Ritson, DaVinci’s Demons).

It was fascinating to watch the interaction between the tiniest zealot and the alien-infected religious leader. Because Brainiac’s sentry had absorbed Ona’s mother, Rhom, already, this new host has access to Rhom’s memories of Ona and, seemingly, her affections for the child.

Brainiac’s mission is to judge whether Krypton is worthy of inclusion and he starts with those closest to the Voice of Rao. When he offers Ono the opportunity to spend eternity with her mother, he doesn’t expect the child’s faith in Rao to outweigh her desire to be reunited with her mother.

And yet, it’s her mother’s teachings that guide her to surprise the Collector of Worlds, an experience he is unfamiliar with but seems to like.

Elsewhere in Kandor, but very close by, the plot to overthrow Rao progresses quickly now that Jayna has thrown in with House Vex. She, in turn, shares the plan with Dev whose principles are stretched to the limit, tested by his loyalty to his Primus.

Jayna’s commitment to the plan is total and her inability to move in any direction but forward means that potential complications like the suspicions of a young, proactive Sagitari, Taz-Ran (Desmond Eastwood, The Real Brian Wilson) need to be dealt with quickly and effectively.

Dev demonstrates more innovation in his plotting when the Voice of Rao suddenly decides to pack the Council Room to maximum capacity, placing hundreds of innocents in danger when the planned bomb detonates.

Unfortunately, his evacuation and escorting of the Voice to his chambers to be ambushed by Sagitari loyal to Jayna is all for naught as Brainiac instead takes the opportunity to absorb them all.

While House Vex is rolling some pretty big dice in the city, Seg et al are underground with Black Zero, Lyta’s future son (who apparently was besties with Seg’s future son), and a whole heap of Cythonnites determined to stop them from finding the ultimate weapon they guard.

Adam Strange loses some cred with Seg when General Zod reveals that Krypton collapses after Brainiac rips Kandor out for his collection. The conflict between Strange’s desire to preserve the timeline and Seg’s preference to save his planet comes to the forefront and Seg chooses to help find the weapon General Zod thinks can stop Brainiac.

Seg leads Zod and Lyta to the strange crest he saw when he rescued Raika. Zod loads up the door with military-grade explosives and the massive blast… does absolutely nothing.

So again with the blood locks. For a rather pristine society (I mean, have you seen how they conceive children?) they seem to like to bleed all over their security systems.

Seg and Zod bloody up the lock when Seg realizes the sigil is a combination of House El and House Zod’s crests. It works and opens up the doors to reveal Doomsday in cryo. Yeah, that’s a bad idea and luckily, Adam Strange is there to warn them against what they’ve found behind Door Number One.

Seg commits to help Zod stop Brainiac but states emphatically that they will not be employing Doomsday for that purpose.

There wasn’t a lot of humour at work here as rebellion and the potential mass murder of Kandorians is being sorted out. We spend a lot of time with Jayna and Daron arguing over what the value of honour is.

The scene that most amused me this episode is when Seg, Zod, and Lyta are attacked and mother and future-son take out all the attackers while Seg watches.

Overall, there are a lot of big questions that need answering in the next few weeks. What I’m most interested in is what role the priestesses (?) of the Voice of Rao will play in either resisting or assisting Brainiac’s absorption of the Kandorian populace.

Everyone Has Something to Learn, Bull “Teacher’s Pet”