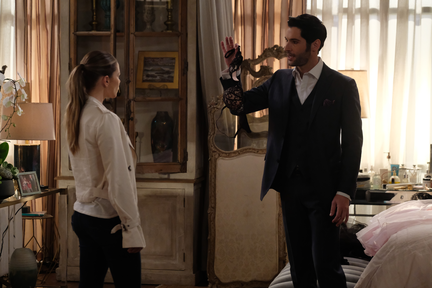 Pissing contests are rarely about the actual competition or even about the piss. It’s about the opponent.

As Cain/Pierce’s most recent plan for ridding himself of immortality has involved winning Chloe’s affections, Lucifer has become more and more preoccupied with besting the world’s first murderer/past crime lord/present-day police lieutenant.

And although we’ve known since the first time Chloe shot him and made him bleed that Lucifer’s vulnerability is all about his affection for her, our self-deluded devil still thinks it’s about how he affects her.

And so does Cain/Pierce actually. When Lucifer points out that the mark on his arm is gone, Cain draws the conclusion that Chloe loving HIM removed it. Guys are so self-centred sometimes.

The obvious reasoning (to us viewers) is that Cain redeemed himself by pulling his punch when he stops her from confessing her love, demonstrating his affection for her. It’s the change in him that affected his mark not a change in her.

But Lucifer buys into it too and even sees the fact he still bleeds around her as proof that she loves him, giving him hope that he can once again be first in her life as Cain/Pierce broke it off with her.

As has become the routine, the case of the week spells out the life lesson for Lucifer. The victim here is a prima ballerina murdered by strangulation with the ties of ballet pointe shoes. The trail leads through her rival, to a business associate (Greg Ellis, Hawaii Five-O), then a lover (Robert Curtis Brown, The Handmaid’s Tale), and then back to her rival’s dance partner.

The moral of the story? Come clean about your feelings to your love interest instead of blackmailing and murdering people to get close to her. You’d think it would be a no-brainer…

While our love triangle traipses around town leaving lemon squares and long-stemmed roses in their wake, Amenadiel has concludes that he and Charlotte should help Lucifer’s cause by proving that Cain/Pierce is the Sinnerman crime lord, thus separating him from Chloe.

With the chance to do God’s work and save herself from a return ticket to Hell, Charlotte comes out guns a-blazing, commandeering a motorcycle for the mission and tailing Cain to discover what he bought from a known fence.

When he confronts her, she tries to mask her pursuit as something sexy but he’s quick to turn her down.

(It’s interesting to note that Charlotte’s motivation is the only one I buy into whole-heartedly at the moment. I’m pretty much mystified or really annoyed by everyone else.)

Amenadiel and Charlotte come up short in their goal of unmasking Cain as a criminal, breaking into his house after Chloe stands him up. Of course, he takes the fenced merch with him.

Meanwhile, Lucifer’s toolkit is ringing a bit hollow. In his attempt to redirect Chloe’s affections, he tries bad-mouthing Cain/Pierce (which wins him Dan — not the goal), bringing her trinkets (seasonal drink, lemon square, and a sports car), and then surprising her with a romantic dinner.

Each attempt is an epic strike as he never manages to make the act about her but instead chooses to point out how whatever he’s done outshines/outcosts Pierce’s resources. No wonder Chloe feels like the bone being fought over by two dogs.

And when Lucifer finally internalizes what he should’ve done in the first place, he rushes over to Chloe’s house just in time to see her accept Pierce’s marriage proposal and the ring he bought from the fence. (And… what now? He just dumped you, lady. Chloe makes NO sense.)

Girlfriends’ Guide to Divorce “Rule #155: Go With the Magician”

Two Moments of Goodness from Arrow â€œTime of Deathâ€