Lucifer Makes No Bones About “The Angel of San Bernardino” 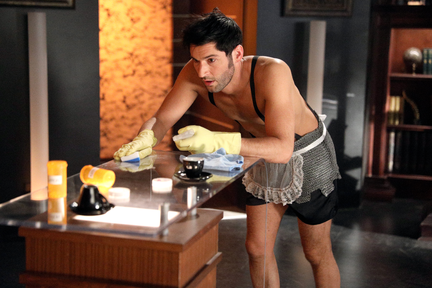 They say that which doesn’t kill you makes you stronger. If that’s the case, as evidenced by this season’s exploration of Cain/Pierce’s situation, it means that humanity’s first murderer is freakin’ STRONG.

Of course, Cain/Pierce is only interested in the first part of the adage and, in some still-mystifying plan, using Decker’s geniune affection for him to find something to kill him.

Apparently, based on this episode, Maze is the means but I’m still confused by the method. I suspect it has something to do with love. Uh-huh.

Anyhoo, the crime of the week is the murder of a recovering drug addict. The addict, also the black sheep of a wealthy real estate family, was trying to get clean in order to win back his ex, Mary (Katherine Boecher, Jane the Virgin) and get a chance to have a relationship with their son.

There’s a witness to the killing, his landlady (Lidia Porto, Get Shorty), who claims an angel rescued her from being murdered as well. And then the angel stole one of her ceramic angel figurines. Go figure, talk about mysterious ways.

There’s a lot of closet action in this episode. First, Decker and Pierce have a quickie in the evidence closet at the station, knocking all sorts of stuff off Ella’s adjacent wall while they knock boots. Gotta say, Ella’s got a pretty free-wheeling approach to Catholicism, cheering her co-workers on in their unsanctified union the way she does.

Later, Charlotte, thinking she has a free pass to heaven, after dissing every person she comes in contact with at work (except Ella) convinces an inebriated Dan to strip down in a restaurant storage closet so she can “discover” him. Of course, since it’s Dan, he gets “discovered” by restaurant management instead.

Meanwhile, Lucifer could’ve probably benefited from some closet time. Suspecting that he’s “sleep-flying” to the aid of crime victims, he decides the smart thing to do is to stop sleeping altogether.

That leads us into a highly entertaining montage of sleep-deprived, cocaine-fuelled activities involving fight clubs, dominatrixes, and a wide array of costumes. And a tricycle.

In his eyes wide shut state, he binge watches all twelve seasons of BonesÂ and decides that he’s the Temperance Brennan to Decker’s Sealy Booth. (Yeah, he’s lost me there too.)

Kudos to the show creators for managing to create the turducken of procedurals, even casting Scott Rinker (who also recurred on Ghost Whisperer) as Matt Kessman, an actor hired to play roles in real-life situations. Lucifer recognizes him from his villainous turn in the Bones episode,”Intern in the Incinerator“, and then muddles it for reality when he and Decker track him down.

When Kessman confesses that he was hired to keep the victim addicted and partying, the trail goes cold until Decker realizes that Jeremy Bell (Brandon Barash, Major Crimes), the man who is playing happy families with the victim’s ex and child is another actor from the same agency.

Lucifer gets to Bell first and wrings an account of the night he killed the victim out of him (after he breaks a blade trying to stab our devilishly tired hero) then realizes that someone’s been trying to distract him uses him paranoia about Daddy God interfering with his life.

His first thought is that it’s Cain/Pierce and he’s partially right. Turns out that the gaslighting itself is Maze’s doing and she comes by to gloat. His distraction had allowed Cain/Pierce to captivate Chloe and he rushes to her to try to stop the damage.

But he’s too late although Cain/Pierce didn’t really carry through with his plan. The plan hinged on Chloe saying “I love you” to him and she was about to when he suddenly puts the pin back in and dumps her instead.

He tells Lucifer that he couldn’t go through with it, couldn’t hurt her like that, but I’m not sure how he thought it was going to hurt any less cutting her off where he did.

But apparently it did something because Cain’s mark is gone now and that’s a pretty big deal.

Meanwhile, Chloe wasn’t the only one here who gets her joy shattered. Amenadiel, feeling some concern about revealing Lucifer’s wings to Charlotte, gets the low-down from Dan (presumably after the restaurant manager lets him get dressed again) and sits down to explain that neither he nor Lucifer can access Heaven.

When she realizes that she immediately reverted to her hedonistic, self-centred ways when she thought there was no longer a threat of being returned to Hell, she decides she’s just a terrible person and will be heading back down below one day.

And we all know that all of this angst could’ve been avoided if Amenadiel had just heeded Linda’s advice in the first place. But when has good choices ever made for good television, am I right?

Krypton Underestimates the "House of Zod"

The Aftermath, The Good Wife “The Last Call”