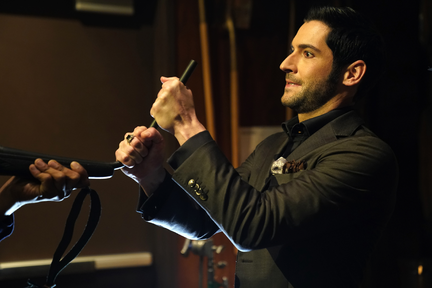 It’s created conflict between Amenadiel and Linda. It’s confused Chloe and Dan. It has reduced Maze to a somewhat one-note (ie. ANGRY) demon.

Most unforgivably: IT. MADE. TRIXIE. CRY.

Needless to say, I’ve been looking forward to its conclusion.

Well, it seems the end is near.

After last episode’s blow-up and storm-out, Maze vacated the house she was sharing with Chloe and Trixie. So, it was a little weird that she was back at the start of this episode.

Apparently, she was looking for “a knife” but her greatest desire is actually to return to Hell to get away from all the people who have managed to hurt her.

When Lucifer refuses to take her back to Hell because it may have repercussions that could harm Chloe, she feels, once again, betrayed. She promises that Lucifer will regret his decision.

Chloe and Caine/Pierce arrive next and Chloe makes up some awkward story about a “beach murder” to explain them being together in beach clothes. With a picnic basket.

Coincidentally, the murder victim of the week is actually found on a beach. And Maze’s missing knife is the murder weapon. Which they only know because she is seen on security video footage retrieving said knife from his chest.

The trail runs through the victim’s trailer-home and to the winery where he worked. All signs indicate Maze was after him. Chloe feels it’s a little too easy. Lucifer thinks it’s Maze’s version of a temper tantrum.

Of course, when Maze walks into the station and confesses to the murder and hands in the knife, basically demanding to be arrested, things seem pretty open-and-shut.

Caine/Pierce expresses some concern that Chloe is too close to the case. No concern at all about the fact that he’s started an intimate relationship with a subordinate but yeah, Chloe is the one who may be acting unprofessionally.

Maze basically solves her own case after hug-mugging Ella for her security badge (“She ruined hugging!” gets the prize for the best line of the episode) and tracking down the bail bondsman Barry Hill (Patrick Gallagher, Glee) who helped set her up.

After some bowling alley shenanigans, she gets Barry alone for a hands-on interrogation but get interrupted when he gets shot through the head by a sniper shot.

The procedural leads back to the winery and its owner, Margo Channing (McNally Sagal, Sons of Anarchy) whose son Maze had bounty-hunted and who had died recently during a prison riot.

The motivation is believable but — holy cow — is the execution ever convoluted if you follow the reasoning. Channing would’ve had to have hired the mercenary foreman who, presumably, also surveilled Maze to find out her favourite drink, broke into Chloe’s house to steal the knife and went through the recycling for the empty.

Then she would have had to track down and hire one of Maze’s previous bounties after he’d been released on parole and then murder him (by stabbing him ten times). Lastly, they put in an order at Barry Hill’s business to get Maze on the track of the now-dead mark so that she finds him and gets filmed pulling the knife out.

Not done yet, they follow up by setting an armed surveillance on Maze (or Barry) in order to shoot him dead before he can spill what he knows.

So, in the crazed pursuit of sending Maze to prison because she blames her for her reprobate son’s incarceration and death, Margo Channing ordered the murder of two people and then decides to just shoot Maze in her wine warehouse and be done with it. Yeah, okay.

The misplaced blame theme sort of seems to zip right over Maze’s head in the final showdown scene. What doesn’t escape her, though, is Lucifer’s “settling” for their relationship when he resigns himself to Chloe’s relationship with Caine/Pierce.

Feeling pretty sensitive to being the leftover, she storms out and straight to… a bus station? A really strange choice considering the monetary means she has. I can only assume flying anywhere is out because of the arsenal she carries.

But that sets up a nice ambience for Caine/Pierce’s emergence from the shadows to propose a partnership. And… A-HA! That’s what all this Maze mess has been about. Take Lucifer’s staunchest supporter away and turn her against him. To what ends still remains to be seen but I feel a little better knowing that a resolution is coming.

With Maze’s story enfolded into the Caine/Pierce one here, the Charlotte/Amenadiel/Linda one took its place on deck. Evolving from Amenadiel inability to stay away and shut up about his mother, Charlotte confronts Lucifer who lays out EVERYTHING in plain terms which, of course, sound crazy.

It’s a fast track from that unmanageable truth to a straight-up winged revelation to a mostly-pickled Charlotte at LUX’s bar. That, as with everything Luci does, is a most impressive sight.

LuciferÂ is off for a couple of weeks, including the Easter weekend (LOL!) and returns April 16th at 8pm ET/PT on FOX.

The Vampire Diaries “Picture of You”