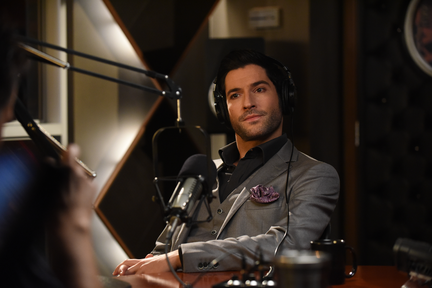 The one thing we haven’t seen a lot of on a show full of immortals is costumed flashbacks. The only one that comes close is the origin story we got at New Year’sÂ and that was only going back five years. But we did get to see Luci in a leisure suit.

Cain/Pierce has actually been wandering the earth a whole lot longer than Lucifer so we could have potentially been treated to Caveman Cain, Toga Cain, even Powdered-Wig-and-Man-In-Heels Cain. Alas, the time machine only zipped back to the 1950s with its sharp suits, debonair hats, and stylish hair dos.

This episode broke out of the mold a bit which was fun. Instead of a one-off killer/murder case, the investigation was a serial killer copycat case, resembling one Cain/Pierce helped crack when he worked the L.A. beat in the 1950s.

The “Broken Hearts Killer” murdered cheating couples by caving in their chests after forcing them to swallow their wedding rings and then posing them in death.

Cain/Pierce and his partner put the killer behind bars and he died there a few days before the newest victims were found. I suspected for a half-second that the killer’s soul had escaped Hell somehow but, no, this was a straight-up copy cat case.

That leads them to murderer groupie, Neil Berger (Joshua Gomez, Chuck) who conducts BHK Segway tours that convene at the house the killer used to live in, much to the ire of the house’s current occupant, Joel (who is played to my great amusement by Andrew Leeds, best known to me for playing serial killer Christopher Pelant on Bones).

Neil’s a great talker and he ends up talking himself right into an arrest but that was way too easy so I kept looking for a twist.

So when Cain/Pierce wanders back into his old watering hole to find Maddie (Fiona Gubelmann, The Good Doctor), the barkeep, who is the spitting image of her grandmother, Kay, who had been romantically interested in him while he was investigating the Broken Hearts Killer, I wondered if it wasn’t a family murder legacy.

This whole time, Lucifer’s been in a snit about Chloe and Cain/Pierce getting all cosy and there’s been a weird contortion of our periphery team where Maze has gone all hedon-demony, Amenadiel and Charlotte have an awkward encounter, and Trixie CRIES.

The next step in the investigation is to lure the killer in by setting Chloe and Cain/Pierce up to look like a cheating couple. With Lucifer as the jilted ex. Which he loves, of course.

Despite an initial false alarm involving a station intern, Lucifer does intervene just in time when Joel (dude’s getting typecast a little) shows up with a sledgehammer after knocking Chloe and Cain/Pierce out with gas (which was obviously not flammable as the candles and fireplace didn’t cause it to go boom).

As procedurals go, this one was a bit hackneyed as there were no clues as to Joel’s guilt laid out at all in the script. In fact, Lucifer actually identifies him verbally in case viewers weren’t paying attention when he runs Neil off his property (and they never watched Bones).

On the character development front however, there’s a lot going on. Lucifer realizes that Chloe can have a variety of relationships and that doesn’t mean she’s any less his partner. Dan has to step up and confront Maze when her shenanigans put Trixie at risk.

Maze exits (with her knives) after causing Trixie’s TEARS (it was actually more heart-rending than any of the actually hearts that Joel rendered in his killing spree). The sense is that any humanity Maze was harbouring has been squelched by the trauma of feeling betrayed.

Amenadiel gets caught out stalking Charlotte (even after Linda warns him to stay away) and then decides he has to explain the truth of her year of Hell. An interesting development since I really have no idea where that’s going to go.

The stinger in the episode was learning that Cain/Pierce isn’t as wall-less as he’s been claiming. Chloe is still a pawn in his goal of dying and he’s just playing a new strategy. Sigh, okay. I have to say I’m disappointed but maybe it’ll push Chloe into a little more personal agency.

Once Upon a Time “Smash the Mirror”