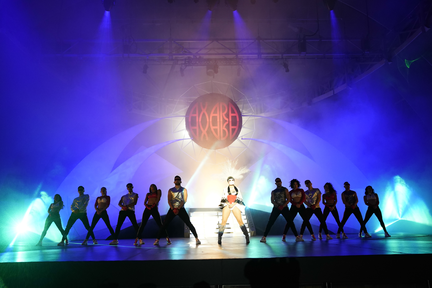 Well, we’re properly in the thick of it now. Despite a driving ambition to piss off Daddy God by helping Cain/Pierce die, Lucifer, having realized that losing Decker is a deal-breaker, breaks his deal with the world’s first murderer and entertains the idea of directing his energies to craft beers or pet sharks.

Meanwhile, Cain/Pierce is moping around the precinct, slaughtering “Dust in the Wind” on an acoustic guitar and Ella is (bless her heart) trying to cheer him up. When her “compliment box” gets weirdly arm-focussed, she convinces Espinoza to give it a try.

This week’s murder victim is a back-up dancer for musical performer Axara (Skye Townsend, 8 Days a Week) who switches places with the superstar for a masked dance routine and ends up dead of a close-range firework to the gut.

Honestly, I expected a lot more screaming from the victim… or even the audience. Either Axara crowds are super stoned-out-chill or incredibly unobservant.

Assuming Axara was the intended target, Decker and Luci start running down potential suspects including her ex-back-up singer, Patrick/Patty (Steven Daniel Brun, Hipsters Anonymous) who has started a popular “Axara 2.0” drag-queen act, and super fan Benny4Axara who turns out to be their second (but actually first) victim, staged to look like a guilt-ridden suicide.

Meanwhile, Dr. Linda extends an olive branch (in the form of a gift-wrapped battle axe) to Maze but is met with silence. Out of (serious) desperation, she accepts Charlotte’s offer to mediate their conflict. Needless to say, that doesn’t go well.

While investigating, Lucifer comes to the conclusion that the solution to keeping Decker safe is to stop drawing her into his attention spotlight. This plan comes about with a lot of self-talk which played out a bit like a soliloquay except that he was surrounded by people who could actually hear him.

Jumping into action on this new strategy, he comically and obviously showers attention on everyone in his vicinity who isn’t Decker which, of course, only seems to make her even more obviously his focus.

Back at the LUX ranch, er… bar, Espinoza is giving Pierce his A-Game pep talk trying to convince the man who has wandered the Earth since the dawn of time that his cup is half-full. Feeling the drag of Pierce’s depression he catches sight of Amenadiel and waves him over, not realizing they’re pretty well acquainted.

Of course, the last time the two of them met, they tried their best to beat each other into a bloody pulp. This time, when Amenadiel demands that Cain stop trying to thwart God’s plan, Cain’s like,”Sure, why not?”

Returning to the Axara storyline, Lucifer has volunteered to bodyguard the turmeric-obsessed diva and houses her in the penthouse while Decker arrests her manager, Rohan (Tom Gallop, Will & Grace), only to change her mind when Ella brings her Benny’s toxicology report and misidentifies raw turmeric smoothie ingredients as gastronomical torture devices.

Axara slips Lucifer’s leash upstairs (figuratively of course since, for the first time in eternity, the Devil ain’t in the mood) and gives an impromptu show down on the LUX stage. In his effort to protect her, Luci jumps in on the duet which quickly devolves into a diva-showdown.

Any episode that has Tom Ellis singing gets my attention. Unfortunately, this performance ends abruptly when Axara’s personal assistant (and, it turns out, high school bestie) appears, wielding a knife. When she begins to explain that she’s killed Benny and Jill, the back up dancer, in an effort to scare Axara into ending her performance tours, Lucifer recognizes his own attempt to save Decker from all potential dangers.

An exciting little exchange takes place with Decker on point, Cece (Jillian Rose Reed, Awkward) still holding the knife, and Lucifer diving in between to take the tiny pointy obsessive P.A. down when she turns her attention on the detective.

In the aftermath, Espinoza cuffs Cece while Lucifer plucks her knife out of his chest and Decker tries to staunch the flow of blood with ONE COCKTAIL NAPKIN. Okay, police detective, not emergency medical technician but STILL.

Back at the station, he makes a date with her for Axara’s concert, leaving her slightly stunned by the change in attitude and Lucifer out in the cold when he arrives and assumes he’ll be her plus one.

And now it’s Lucifer’s turn to watch from a distance as Decker enthusiastically responds to Cain/Pierce’s attention. The wheels are turning and our devilish hero has never been one to lie although he HAS managed to deceive himself for some time now.

With elegant symmetry, we find him at the end in Dr. Martin’s office where he started the episode off. However, he’s made his break-through in the interim and it’s shaken him.

Bellevue Preview: "You Don't Understand Me at All"

Game of Thrones “The Long Night”