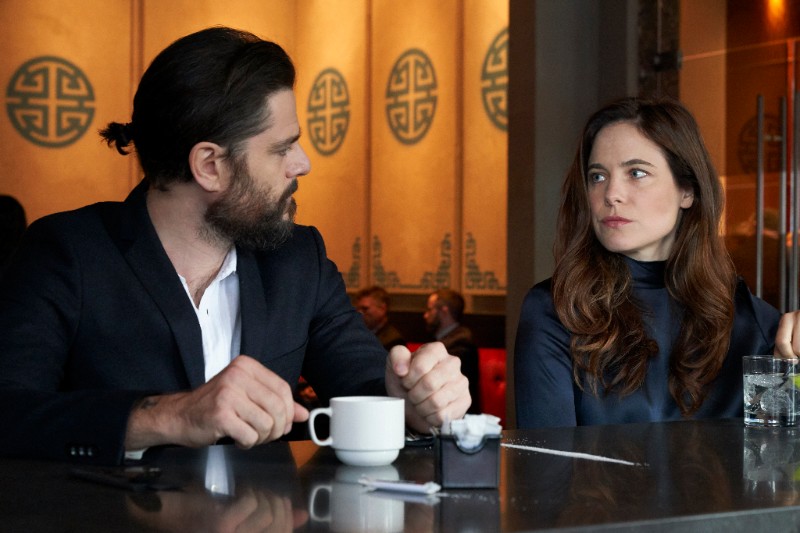 Mary Kills People returns to Lifetime Monday night with a season premiere that reaffirms it’s one of the most solidly written and acted shows on our TVs right now. It’s once again alternately funny and devastating in its evocative exploration of death, dying, and the right to die, and doesn’t miss a beat in making us care about these deeply flawed folks all over again.

“The Means” begins eight months after the events of the Season 1 finale, with Mary on a supply run and Des making early parole after serving eight months of his prison sentence. Right out of the gate, the twosome have to recalibrate their relationship.

Mary’s moved on, working solo, and her business has branched into areas that make Des uncomfortable. That, plus the after effects of being in a box for almost a year lead him to make an impulsive decision with the elusive Olivia (new recurring cast member Rachelle Lefevre) that once again puts them under a microscope.

On the home front, Mary’s daughter Jess continues to act out and make unwise choices of her own, still aligned to Naomi in ways that are increasingly reckless and dangerous. The current state of affairs between Jess’s parents and Naomi’s Mom, Louise, just adds kindling to it.

Thankfully, younger daughter Cambie is still blissfully unaware of the drama that surrounds her. From a process standpoint, the premiere gives us one poignant case with a couple exquisitely portrayed by Schitt’s Creek‘s Karen Robinson and Legion‘s David Ferry and establishes what I expect to be a throughline case for the season with Brendan (Bitten‘s Salvatore Antonio), an accident victim who comes into the ER.

I’m looking forward to seeing where the season goes. Mary and Des have thus far been infinitely loyal to each other, and his prison sentence upsets the balance of debts paid and owed. The new wrinkles in the premiere chip further away at their already precariously perched relationship.

The episode is also fairly dialogue light, with most of the emotional resonance happening physically in the way the brilliant-per-usual Caroline Dhavernas and Richard Short carry themselves, interact, and react. So good to have them back. Kelly Makin (Private Eyes) directs a script by series creator and showrunner Tara Armstrong.

Mary Kills People premieres Monday at 9 pm/8c on Lifetime. You can catch all of Season 1 Sunday in a marathon on Lifetime Movies beginning at 6 pm/5c.