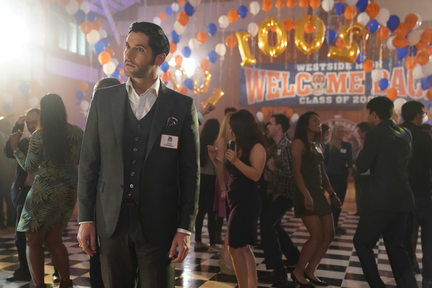 Even when an opening scene telegraphs that it’s a dream, it’s still thrilling to watch because it has license to really GO BIG. Having Lucifer unfurl (his wings) in front of Decker only to have her fall off his penthouse balcony was a heckuva way to welcome us back into our favourite devilish epic.

And then we’re immediately ensconced again IRL in Lucifer’s search an way to kill the cursed and immortal Cain. Although Cain/Pierce doesn’t actually make an appearance, Lucifer’s motivation to solve this week’s murder of a novelist is to find a cure for his “writer’s block” as it is.

The murder case is almost incidental, mostly serving to reinforce Ella’s assertion (while looking a-freakin-dorable in a blue neon-party wig) that Decker missed out on the high school experience. It’s, like, totes endearing how she gets so caught up in the teen-angst novels the victim, Kathleen Pike, wrote that she totally fan-girls when she meets the people the characters are based on.

And, to be honest, it is supremely entertaining to watch Lucifer have to pick up the detective-ing slack when his usually-all-business partner gets distracted by the nouveau-novel celebs. Not his cup of tea at all.

Despite the predominantly filler scenes (at least in regards to the long arc plot), the writing doesn’t fall down a bit. Charlotte Richards is in, literally, one scene but she manages to get a crucial line when she’s asked if there were a legal way to detain Todd Cornwell (Austin Basis, Beauty and the Beast) in order for Lucifer to impersonate him at the reunion.

“Well, it’s definitely NOT legal to distract Todd with, say, a bounty hunter.

If anyone needs me, I’m going to be in my office, NOT hearing the plan.”

And that segues perfectly into the B Plot that was so much more interesting for me – Maze’s confronting Amenadiel and Dr. Martin about their relationship.

It’s been a slow burn for our favourite torture-queen and although her bestie and ex have been fairly low-key about the whole thing, she’s been feeding her little rage baby for weeks now. The training dummies she’s been skewering with Trixie were particularly effective in conveying the deepness of her ire.

Trixie is still the delight of the show for me as a viewer and, apparently, the source of inspiration for so many of the characters. That Maze realizes through her pint-sized advice that she needs to make Linda and Amenadiel tell the truth just seems perfectly fitting.

That she intimidates Linda into a blind date-turn-double date scenario with a bounty target… well, that’s pure Maze.

Just as the fans of the Class of 3001 series keep insisting about the books, this episode is a lot deeper than it appears on first glance. Not the procedural aspect, of course. That side of it followed the playbook in that the first person they question on the case, editor Vincent Green (Russell Wong, Romeo Must Die), turns out to be the killer.

We get the usual red herrings in the course of the investigation: fan-fic writer and fan-boy Ashley (Joseph Dixon, The Bold and the Beautiful); the many high school classmates she named in her books; even Todd, the Odd Bod. It’s an elegant bridge to making the arrest when Decker connects Ashley’s fan fiction to the fictional ending Green had briefly outlined for them.

Where the hidden depths lie is in exploring characters’ regrets. Decker regrets her overly-mature teen years. Maze regrets leaving herself vulnerable to Amenadiel and Linda’s betrayal. Linda ultimately regrets her brief period of “selfish” indulgence with Amenadiel at the price of Maze’s friendship.

Everyone tries to get back to an equilibrium in their own way and everyone still ends up a little discombobulated.

Of course, despite Lucifer failing to find a silver bullet solution in the dead writer’s manuscript, Decker apparently lends him some divine spark in her advice to “move forward” in order to solve a problem of the past. Hmm, maybe Trixie comes by her superpowers genetically through her mum?

Which leaves us wondering how exactly Luci plans on righting Cain’s wrong to circumvent the curse altogether. Time-travel? Resurrecting Abel? The possibilities are boggling.

Bellevue Preview: "The Problem with the Truth"

Dancing with the Stars “Season 18 Week 8”

How to Get Away with Murder “Smile, or Go to Jail”

Dark Matter “Wish I Could Believe You”