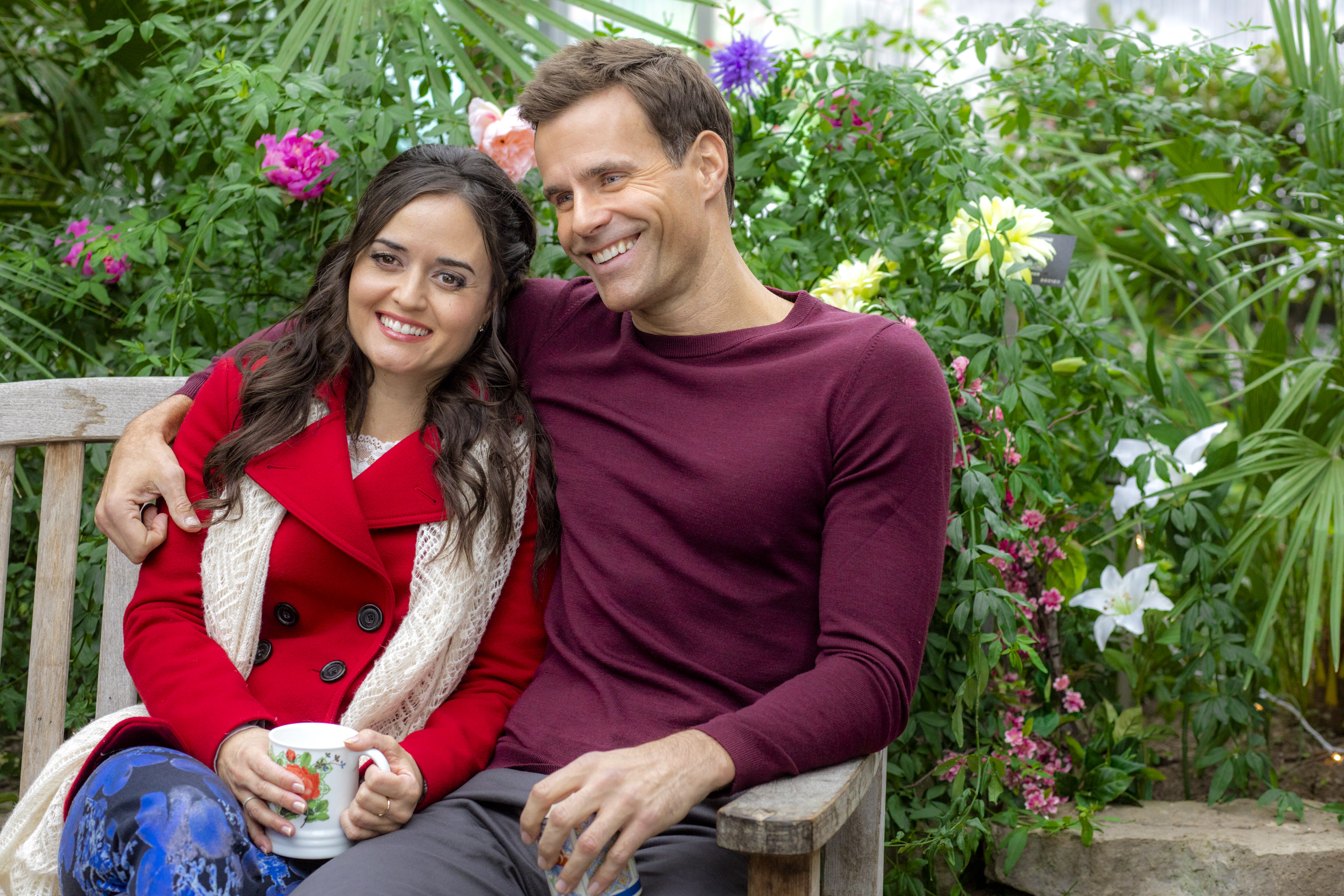 Cameron Mathison is one of our favorites, and he’s back on Hallmark Channel Saturday night in Very, Very Valentine, starring opposite Danica McKellar as Henry, a botanist who inadvertently helps flower shop owner Helen, the BFF he secretly loves, by encouraging her budding new romance with Charles (Christmas Festival of Ice‘s Damon Runyan). Mathison is always a good chat, so I jumped on the phone with him this afternoon to talk about the film and last summer’s At Home in Mitford, and of course asked him for a status on Murder She Baked.

Mathison and McKellar are a new pairing, and although they’d previously met, they hadn’t acted opposite each other. “I had interviewed her before during Dancing with the Stars, but we had never worked together,” he points out. “The beautiful thing about getting in the Hallmark family is they get the scripts and put things together and figure out which family members would fit well with different projects and scripts.”

“Danica was already involved and they sent me the script and asked if i wanted to be involved and I jumped at the chance. It’s always fun to have a different angle. It was fun to play a character was so selfless and help the guy get the girl he wants to be with. It’s almost self-deprecating. There was something pure about him. It was a challenge to convince myself why he was doing this. I think the last scene was my favorite.”

Although both of them are DWTS alumni and there’s a perfectly good ballroom scene, they don’t dance together in the movie. “I thought for sure we’d be dancing. In the script they never got the opportunity,” he says. “When I was reading the script, I thought the same thing. We shot it in Hamilton, Ontario. It plays for Brooklyn really nicely. [We filmed in] an actual arboretum and flower shop. They had some really nice facilities.”

At Home in Mitford (streaming on Hallmark Movies Now) was adapted from a book series, and Cameron would love to do a follow-up film. “I really hope we do another one but I’m not sure what the plan is. Talk about playing a character that was a little different for me…I loved working with Andie MacDowell,” he shares.

“I really appreciated working with her. I thought we worked well together. In the book, Father Tim was very different from me I guess he was in his mid to late 60s and bald and sort of overweight and the diehard book fans were [disappointed]. Sometimes that works, sometimes it doesn’t I did my best, and whatever happens, happens. I really liked it.”

Mathison has also shot Manopause, a pilot presentation that’s making the rounds, and if it’s picked up, he expects it to be a streaming series. “It’s based on a true story about these guys who had it all and were very successful and had a lot of money,” he says.

“Three buddies who have known each other all their lives and one of them dies and they realize [all of that success and wealth] means nothing so they’re spiraling out of control. I play a little but of younger guy who moves into the neighborhood and I get all the attention that they used to get and we butt heads.”

“They don’t know I’m gay and then they find out [later on] and ultimately I become their greatest ally to help them meet women and I’m no threat to them. It’s a cute script. I had a very, very small part in the pilot. If it goes, I’d be recurring or a regular. I can’t sign on full time but recurring would be great.”

Mathison has been super busy this spring covering various TV, movie, and music awards for Entertainment Tonight, and says it’s been a whirlwind but better than in years past. “It’s been a little more civil, to tell you the truth. The big though line has been #metoo and #timesup and it’s been nice to talk about something meaningful through the award season,” he shares. “It’s pretty hectic. It’s been an intense time but this time of year is always very good.”

Here at TV Goodness, we love Murder She Baked, and we know that y’all do, too. Mathison appreciates all the fan support and says they are not cancelled, but they haven’t yet found the time to get the band back together.

“Everybody from all sides wants to make another one happen,” he explains. “But we’re all busy and there are logistics that are making it difficult. We’re really, really hopeful we’ll be able to put another one together.”

So are we! In the interim, you can watch Mathison Saturday night when Very, Very Valentine premieres at 9/8c on Hallmark Channel. He plans to live Tweet while tag-teaming attendance at his niece’s birthday party. Here’s a sneak peek.

Altered Carbon Preview: "In a Lonely Place" and "Force of Evil"