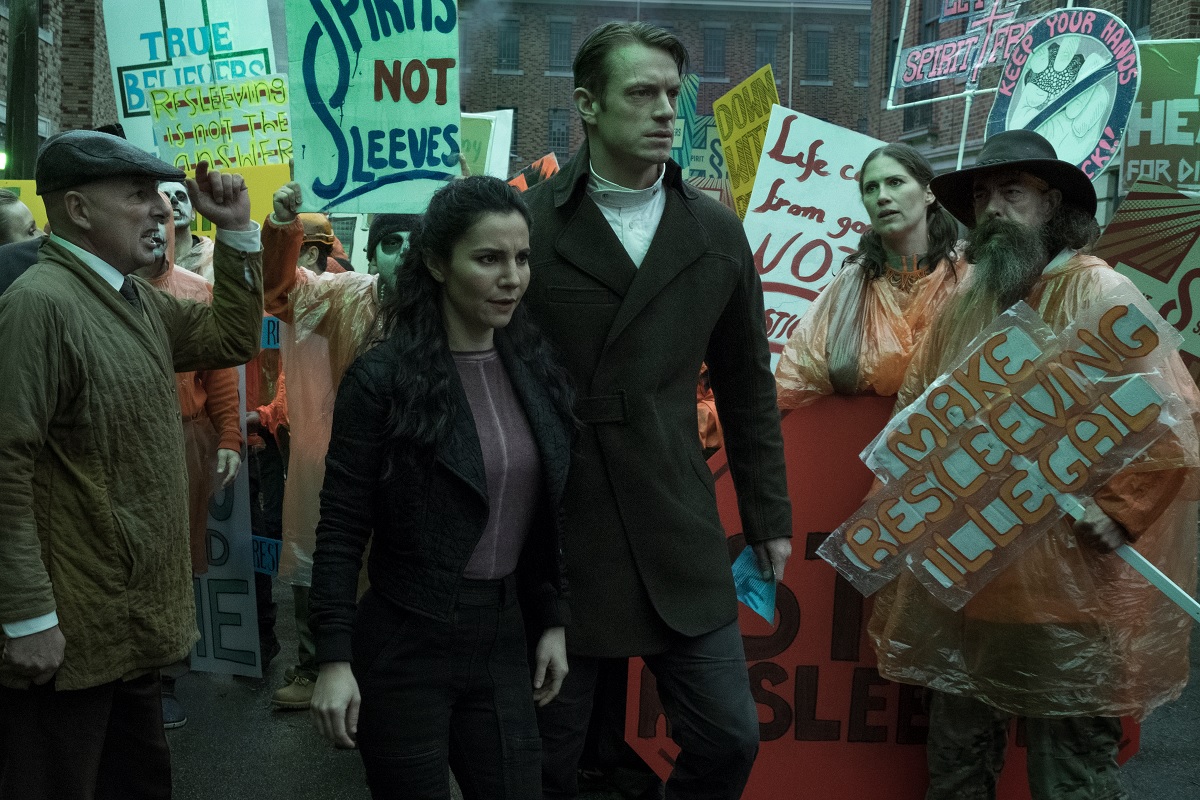 If y’all have been here a while, y’all know I was all-in on Joel Kinnaman and Mirelle Enos in The Killing. Enos was back on TV for two seasons in ABC’s The Catch, which wasn’t at all my jam, but Tina and Cortney loved it. Kinnaman has taken his time coming back around, sort of.

He hit the big screen in summer 2016 in Suicide Squad and later that year began production on Netflix’s Altered Carbon, based on Richard K. Morgan’s novel and adapted by series creator Laeta Kalogridis (Shutter Island). After a fairly extensive post-production period, it was finally released at midnight.

Taking pages out of Blade Runner and Netflix’s own Travelers, the first episode of the series paints a pretty bleak portrait of the future 300 years ahead, in a variation of San Francisco, where convicted criminals and crime victims get a unique second lease on life, in an entirely new body, or “sleeve.”

Kinnaman plays Takeshi Kovacs, the last surviving Envoy, a special class of solder highly trained and particularly adept at jumping in and out of hosts with an immediate cognitive and physical ready response. When we meet Kovacs, he’s being rebooted 250 years after the events in the cold open, in the service of a particular benefactor who’s purchased his freedom from incarceration.

Laurens Bancroft (James Purefoy) pays for Kovacs to be “re-sleeved” and essentially offers Kovacs the world, if Kovacs can solve a murder, which establishes an interesting premise about commoditizing the soul and consciousness. Kovacs doesn’t give a damn about being indentured until his free pass around the city draws entirely too much attention, which piques his interest.

That covers his professional situation, but on the personal front, he’s plagued by the past with bleed-through memories of Quellcrist Falconer (RenÃ©e Elise Goldsberry), a lost love/mentor, and the present with Kristin Ortega (Martha Higareda of Royal Pains) a detective who’s equally terrified/pissed off/intrigued that Bancroft has unleashed a somewhat legendary assassin in her city.

The visuals are superb, and considering that I just watched Blade Runner: 2049Â at the weekend, they were sort of familiar to that aesthetic, but moreso to the OGÂ Blade Runner with a mix of AI, neon, and old school noir. I’m fascinated when the hive mind comes up with future scenarios that are visually identical in many respects.

On top of that, there are some killer fight scenes and a wink nod to John Wick‘s Continental Hotel. Kinnaman plays Kovacs as 80% swagger, 10% zero f-cks, and 10% haunted soul, i.e. a not-too-distant cousin of Holder, which totally works for me. I didn’t watch The Following or Hap and Leonard, so I don’t have a bead on Purefoy yet, although there’s a running VO that leads us to believe he’s not what he seems.

The series filmed in Vancouver, and there are a few cdntv goodies in the first episode, like Ghost Wars‘ Kristin Lehman as Bancroft’s wife, Miriam, Arrow and Blood and Water‘s Byron Mann as the original Kovacs (who’s also played by Falling Water‘s Will Yun Lee, andÂ BSG‘s Tahmoh Penikett as Dmitri, a would-be assassin.

I’ve missed having Kinnaman in a series, and watching him navigate Kovacs’ past, present, and opportunity at a future is a much more intriguing premise to me than the murder mystery. That said, I’m completely down for nine more episodes to see where those roads lead.

They're Back! Killjoys Starts Filming Season 4