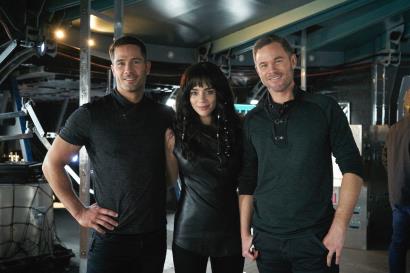 Our most favorite space nerds and bad asses are back at it this week, with Killjoys commencing principal photography in Toronto on Season 4. The plan is also shoot Season 5 this year, so the kids will be very busy for the next several months!

Canadian network Space Channel released a fun walk-and-talk cast and crew video this morning to commemorate the return to work, and some of them are sharing on social media that they’re as goofy giddy happy as we are that the band is back together.

Peeling mic tape off my boob in the shower this morning because WE ARE BACK BABY! I’m delirious with joy & giddiness to be back w/ the #Killjoys family. GET READY PEOPLE. Next season is already lit and it’s only Day 3.

Cue the fangirling! Here’s what we know:

Consistency is the name of the game as much of the creative staff remains intact from last year, with one key change. Series creator Michelle Lovretta retains her executive producer title but has has handed off the showrunning reins to Adam Barken, who has been on board the show since it began.

The season will bring back directors Pleszczynski, Samir Rehem, Peter Stebbings, and Paolo Barzman, plus Michael Marshall, who was the Director of Photography on the first two seasons, and Stephanie Morgenstern (who created and directed episodes of X-Company, which is coming to Ovation for its US run on February 19th).

The core trio cast return (of course) with Hannah John-Kamen on double-duty again as Dutch and Aneela, plus we know Zeph (Kelly McCormack) is back. I’m going to assume everybody who was still alive in “Wargasm” will be back, too. Here’s a teeny mildly spoilery tease of the plot variety:

At the end of Season 3, our Killjoys are scattered to the far corners of the J Galaxy and beyond. Dutch (John-Kamen) is on a journey to face her biggest foe yet, while Dâ€™av (Luke Macfarlane) and John (Aaron Ashmore) are trapped in an elevator in deep space with a pregnant Delle Seyah (Mayko Nguyen). They are united by the knowledge of the name of their true enemy, The Lady, an immeasurable manifestation of evil without beginning or end. The Lady is making her play and our trio has something she wants â€“ the Hullen Heir.

Killjoys returns to Syfy and Space this summer (we assume). You can catch up on the first three seasons streaming in the US and Canada at the links above. Here’s that video!

Altered Carbon Series Premiere Preview: "Out of the Past"