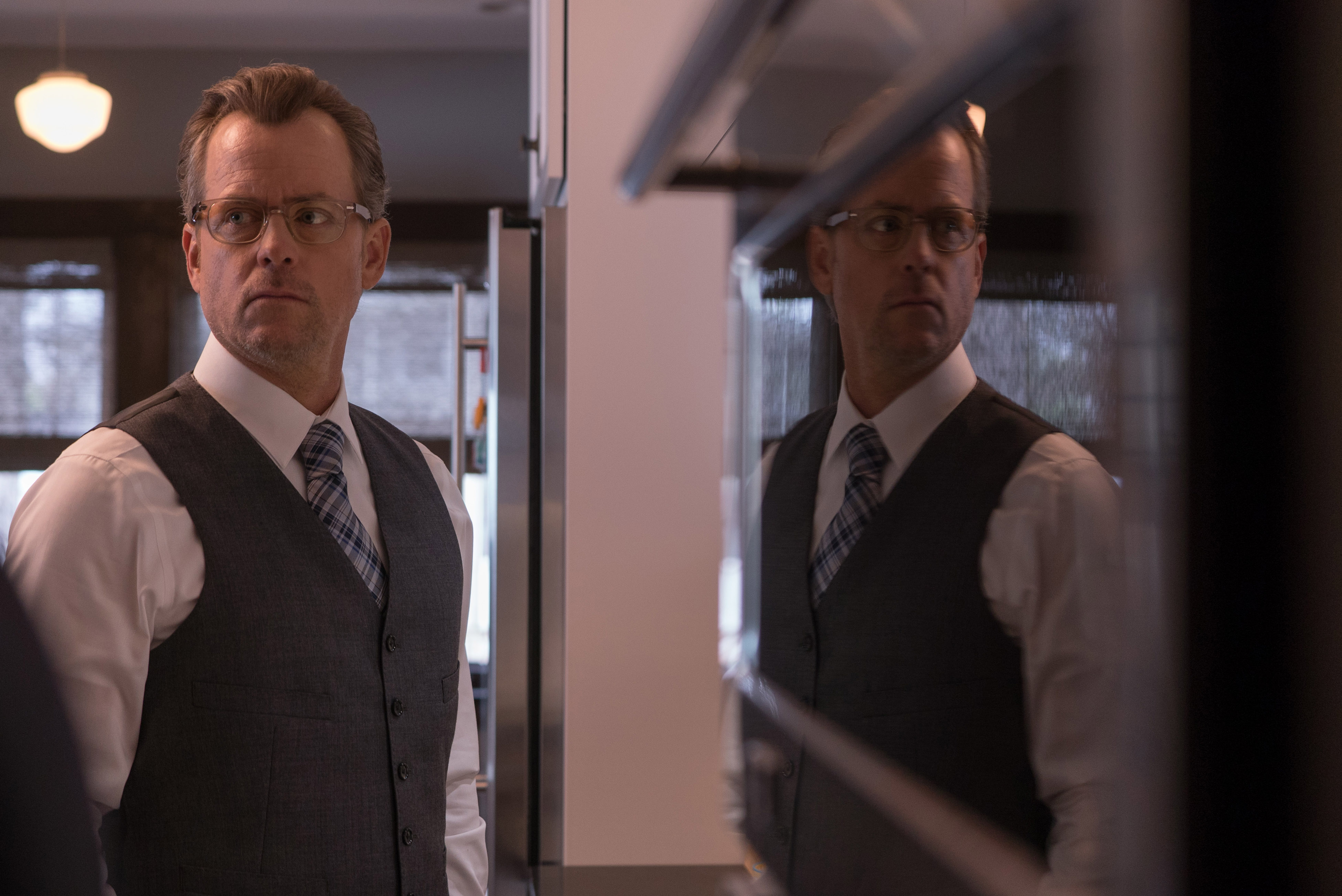 The body-snatcher concept is a popular premise in sci-fi and in the 1950s when Philip K. Dick wrote his short story “The Father-thing,” it was all the rage in books and film, a powerful allegory for the Communist Threat.

Unlike the novel The Body Snatchers (which was adapted quickly after publication into the well-known movie), Dick’s story focused not on a nation threatened by an alien invasion but on the effect on a child when his beloved father is replaced.

Kids these days. When Little League All-Star, Charlie Cotrell (Jack Gore, Billions) witnesses his equally baseball-obsessed father (Greg Kinnear, Rake) attacked in his garage by a doppelgÃ¤nger with weaponized light rays radiating from his mouth, does he immediately run screaming into the house?

No, he lets the titular “Father-thing” masquerade for DAYS before making an attempt to spear him with a rake and decapitate him with other gardening implements in the self-same garage.

Granted, he and his buddies manage to run him down with a car later and then smoosh the bug-alien that crawls out of the replicated body. So, chalk one up for the home team. And setting fire to the replicant nest was a nice touch too.

The episode is well-paced, opening on Charlie recording a tribute to his father whom, he asserts “was not a dick” in the first line of the show. With that attention-grabbing statement, we are drawn into the setting of a middle school student with an ensemble posse I’m sure was meant to remind viewers of the kids from Stranger Things.

He and his dad (before the alien replacement) are camping when there is a rather spectacular astronomical event with a multitude of fireballs falling vertically from the sky. On the trip home the next day, Charlie notices a hunter staring at him at the gas station while his dad is paying for their fuel and snacks.

Back at home, the audience is let in on the fact that all is not great between Charlie’s mom and dad but that they haven’t told him what is in the works for their family. Charlie is preoccupied with whether or not he’ll make the All-Star Roster and under constant threat of being beat up by his best friend’s big brother, Henry (Zakk Paradise, The Do-Over). Kid stuff.

The memory of the strange man at the gas-station sticks with him and at school the next day, his teacher, Mr. Dick (Terry Kinney, Good Behavior) seems a little odd … but that might just be his normal demeanor.

Charlie makes the All-Star roster but it’s when he runs down to let his dad know the moment he gets home from work that the alien doppelgÃ¤nger makes its move.

Thus begins Charlie’s war on the alien invaders, starting in his very own home. When he discovers that there’s a wave of reports online about people acting strangely, the Internet in his house suddenly goes dead and, looking out his window, he sees his father seeming to organizing the neighbours in the middle of the night.

When some of his friends start disappearing from school and Mr. Dick suddenly jumps off a building because he doesn’t think his wife is his wife anymore, Charlie knows that it’s spreading. He tries to convince his mother to no avail, even revealing that he knows they were about to split up.

When his mother (Mireille Enos, The Killing) can’t be convinced, he tries to report it to the authorities but they’ve already been body-snatched. (To be honest, I suspected that his mother had already been snatched as well. Seemed in keeping with Dick’s style of narrative.)

Hence his turning to his mostly-silent bestie, Dylan (Jack Lewis, Revelations) and the aforementioned goon of a big brother, Henry. Their success is minor as the fireballs are continuously landing all over the planet but the story closes on Charlie posting his video recounting their small victory as a pledge to keep up the resistance.

I am often cynical about child performers as many ride the coat-tails of cute instead of digging for substance. Jack Gore’s performance here is nothing short of stellar from his joyful scenes playing ball or practicing with his dad to the look of horror when he sees the replicant body being grown to replace his mother.

Kinnear as both dad and not-dad is genuinely convincing and engaging. His alien-self’s description of finding a home evoked a strange sense of sympathy in me considering his species is looking to displace all of humanity with no qualms whatsoever.

The whispered message of #RESIST fired off into the ether of the interwebs is probably the most upbeat ending we’ve had in the anthology since its companion piece “Human Is” where the problem of an alien replacing a human is treated completely differently.

The X-Files Preview: "Plus One"