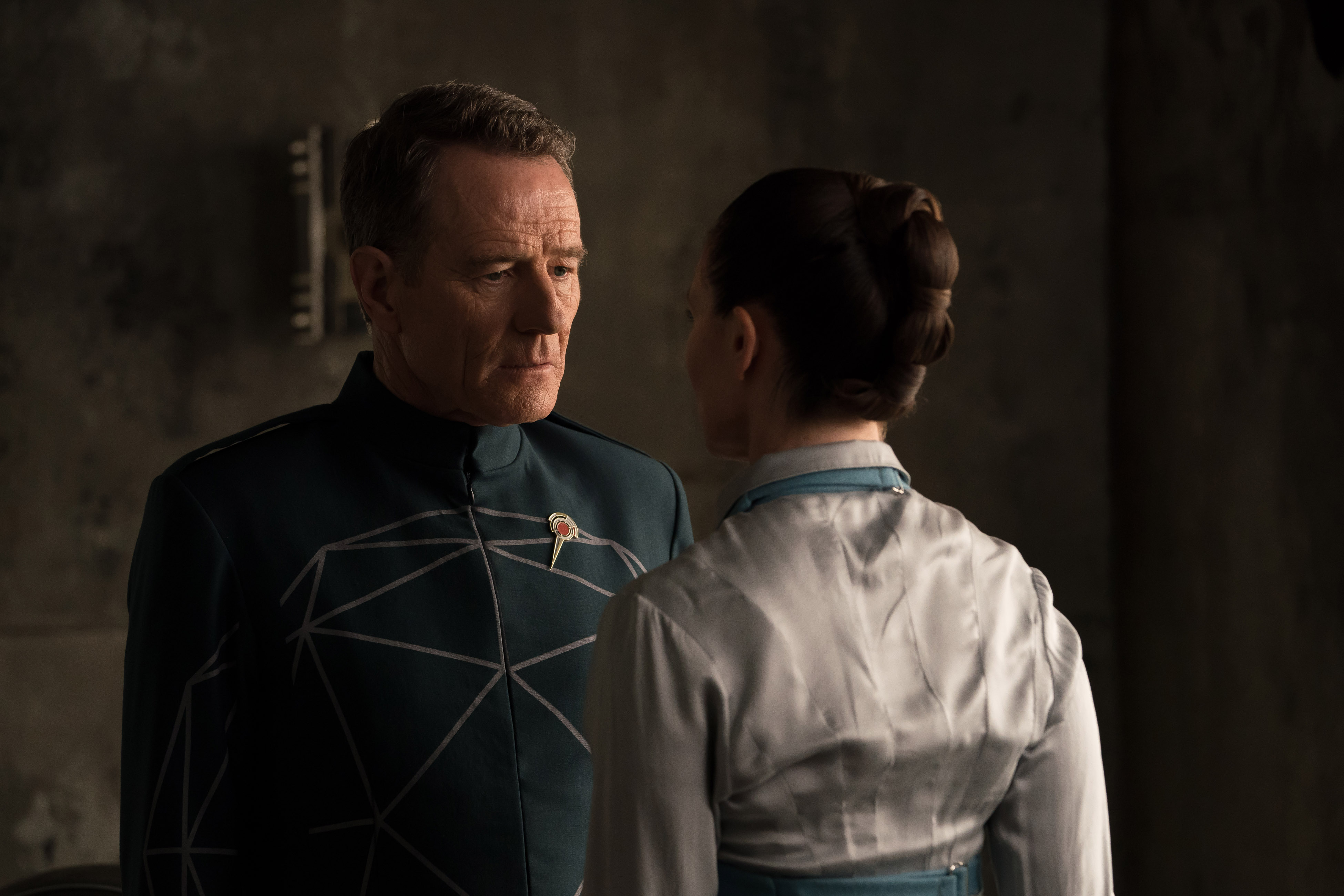 The 16th century true story of the imposture of Martin Guerre has always fascinated story-tellers, retold in novels, opera, films, and even on The Simpsons. And it makes sense because, after all, it’s the story of the ultimate story-teller – a man who is able to live the fiction of another man’s life. Even Mad Men references this tale of the ultimate identity reboot in the person of Don “Dick Whitman” Draper.

Philip K. Dick’s twist on the story is subtle but important. Instead of one man trying to play the role of another man whom he’d never met, this imposter is not only intimately acquainted with every memory and action his mark has but he’s literally wearing his body.

Bryan Cranston (Breaking Bad) is one of the executive producers of the series and in “Human Is” he plays Silas, a high-ranking, highly-decorated military leader with a bad temper and a worse personality. Married by state-dictated match-making to an equally high profile scientist, Vera (Essie Davis, The White Princess) he fills their domestic life with verbal snipes, emotional neglect, and physical anxiety.

So when he’s sent off to Rexor IV, a planet with a resource vital to detoxify Earth’s atmosphere but populated with belligerent inhabitants, she can’t be blamed if she holds out some hope he…retires…in the line of duty. As it is, only two return from the mission and he is one of them.

But this is a Martin Guerre retelling and the changes in Silas are immediately apparent to Vera. Her husband is suddently kind, considerate, helpful, and tender. In short, this is NOT her husband. But is she going to complain? Pfft.

Unfortunately, their society is not only culturally-rigid and results-driven, it’s highly paranoid and xenophobic. Survivors of an enemy ambush are congratulated but also watched carefully.

Vera’s colleague and confidante, Yaro (Ruth Bradley, Humans) is immediately suspicious when Vera starts showing up to work in a sketchy state of … happiness(?) and even testifies to this unlikely evidence of joy when Silas is arrested under suspicion of being the enemy. Gotta wonder how unhappy a person Yaro is that Vera’s domestic hell is the highlight of her day.

The very commanding officer who lauds Silas in the opening scenes, General Olin (Liam Cunningham, Game of Thrones), is party to the prosecuting powers when Silas is on trial and sits silently. Vera is also placed under arrest because she refuses to testify that Silas is under the control of a Rexorian.

The crux of the prosecution is that the Rexorians are not only alien, they are incapable of human emotion or care or devotion and therefore do not merit mercy.

But when Silas tries to save Vera by taking sole ownership of the crime, she leaps up to point out that this act of sacrifice refutes every point of the prosecution’s argument. If he is indeed Rexorian and thus, by nature, the antithesis of humanity, how could he willingly fall on the court’s sword?

Stymied by their own prejudice-based reasoning, they have to free the couple to live their lives out in blissful fiction.

It’s a powerful and moving script with intense performances all around. Human Silas is coldly cruel and when Vera retreats to the sexy opium den in the badly ventilated slums, we know that it’s a justifiable escape from her home life.

The slow realization that Rexorian Silas is everything she ever dreamed her husband could be is beautifully choreographed. Knowing what he was like before, we all fall in love with the imposter a little.

There is a visible internal conflict at the trial as she struggles between her dogmatic loyalty to the state and her newborn love for Rexorian Silas.

My only sense of dissatisfaction with this story is the lack of explanation for the Rexorians’ ability to inhabit humans. Does this mean Human Silas is dead or is he still somewhere in the subconscious? And is it a one-time thing or can Rexorian Silas just jump into some other body if the Silas shell gets injured/aged/itchy? It’s a small glitch in my overall enjoyment of the show when the focus isn’t on the technical specs but on the relationships and psychology of the characters.

So, yeah, a familiar story but powerfully presented and executed. Unlike the Martin Guerre story, there’s no question of the wife’s complicity in the charade and we understand her reasons. Cranston and Davis demonstrate exactly how bad a marriage can be as well as what glory it can be when love is there.

Once Upon a Time “Smash the Mirror”