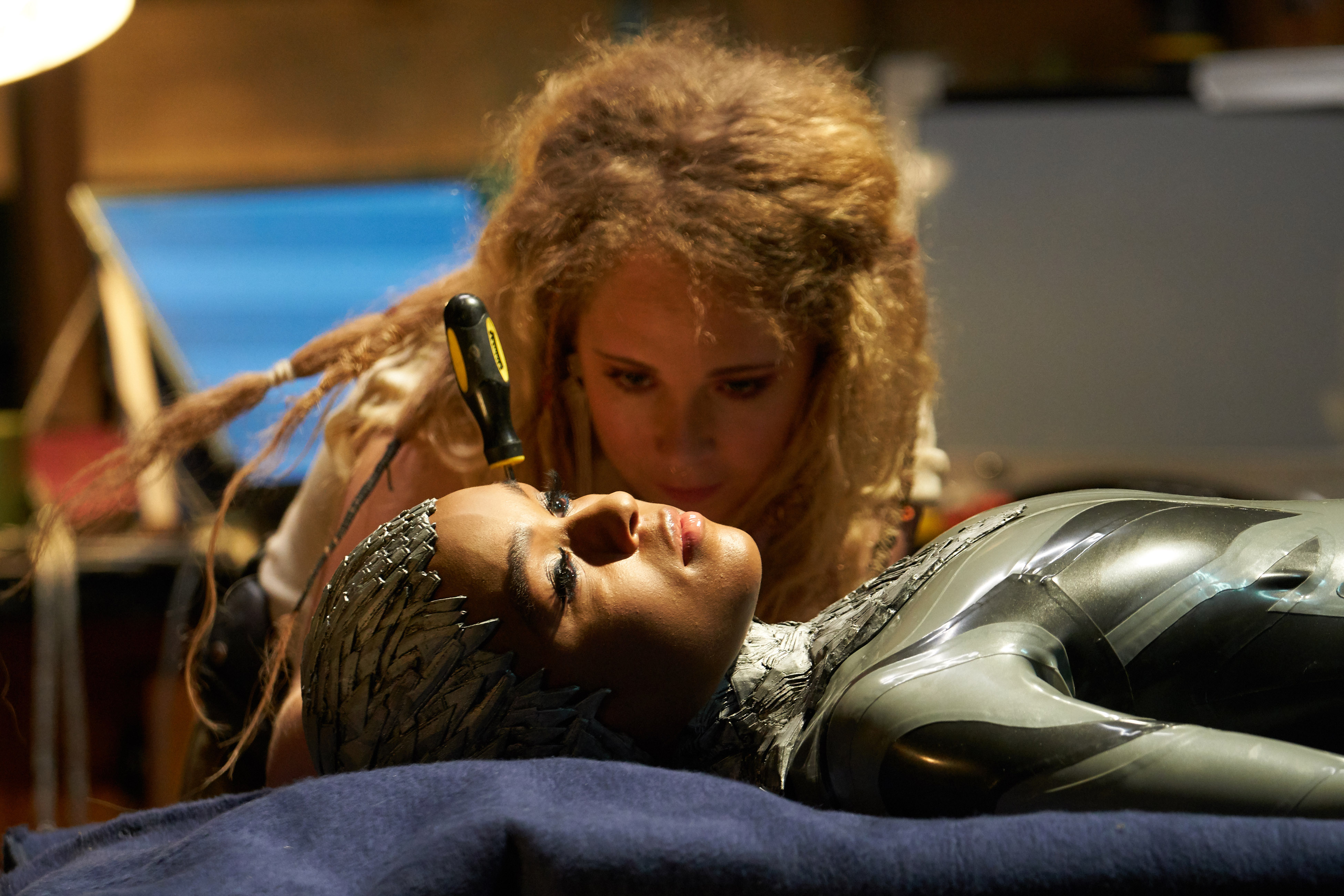 The post-war dystopian future setting is a well-used device to demonstrate humanity’s sense of survival and innovation. Typically, our intrepid collection of hopeful scavengers are pitted against each other (ala Lord of the Flies), or a non-human adversary, or an environmental obstacle.

In “Autofac”, the peril they face is the automated factory (hence the “AutoFac”) which has trapped them in their settlement and threatens to literally bury them in product, pollution, and packaging.

We begin in a dream, or a memory, where the community “tinkerer” Emily Zabriskie (Juno Temple, Vinyl) is driving away from the city just as a missile destroys it. Waking in her current situation, we see how the Autofac sends unwanted goods by drone and how Zabriskie shoots one down in order to hack in and figure out a way to get the Autofac’s attention.

Ironically, considering Electric Dreams is being shown on the Amazon Prime service, it feels like a veiled dig at Amazon’s own proposed drone delivery system. The fully automated factory is everything a consumerist culture could want.

Once Zabriskie launches the Customer Complaint command, she and her buddies, Conrad (David Lyons, The Cape) and Rev (Jay Paulson, Mad Men) let the rest of their community know to expect the Autofac to reach out in the next twenty-four hours. Of course, they have no idea what that’ll look like.

Conrad and Rev try to explain to Alice that they want the Autofac to stop operations so that they can rebuild their society without the constant stream of instant trash being delivered and the pollution the Autofac puts into the air and water. Alice is polite, engaged, and doggedly immovable on the topic.

So, Plan B kicks in. Nuke the Autofac with warheads that Conrad has been holding onto for just this occasion. Zabriskie zaps her to knock her out and hacks into system to attempt to reprogram her to make her assist in their plan.

The script is well-paced and cleverly foreshadows the ultimate reveal of the story – that Zabriskie and everyone that she knows are all simulacrum just like Alice. The war destroyed all of humanity and the Autofac had no function because it had no consumers until it realized that it could produce its own consumers.

The fascinating tidbit for me is that Autofac had a finite number of simulacrum designs so it created many individual communities, each composed of the exact same collection of people. Thus, every community has its own Zabriskie, its own Conrad, etc.

Of course, they are sophisticated enough that they would form their own attachments so not every Avishai (Nick Eversman, Once Upon A Time) will have wooed and won his respective Zabriskie. But, in our specific community, it makes all the difference that he did.

Delightfully, it’s a double twist because once Alice has reversed the situation on our Zabriskie and has her strapped down for “reprogramming”, the “anomaly” that she tries to remove turns out to be malware that Zabriskie had planted within herself, having realized years ago what she actually was.

The malware shuts Autofac down, which is Zabriskie’s way of righting the wrong the original Emily Zabriskie committed by inventing Autofac in the first place (another powerful reveal that built on the mysterious issue of Wired Magazine that Zabriskie was so protective of) and she returns to her community and Avi, presumably to live out their mechanical lives in an idealized sort of Westworld.

Although Temple and Eversman effectively convey the awkwardness of their relationship and Conrad and Rev are believably cautious about poking the Autofac bear while still committed to its take down, it wasÂ MonÃ¡e’s performance as Alice that really impressed me. Acting the part of a machine programmed to act like a person is no mean feat and she perfectly personifies that infuriating auto-voice we all know so well from telephone routing systems.

I appreciated the intricacy of this story which was elegantly explained through select details and exposition. It’s ambitious to try to explain how a situation arises and even more ambitious to present a final solution to it that makes sense.

Of course, it left a lot open for discussion, despite its “happy” ending. The simulacrums will never procreate which could be explained by Autofac’s pollution but what about when they realize they don’t age? Is there a programmed reset or filter? Is there a randomized auto shut-down to simulate death?

The biggest question I was left with was,”What about the other communities Alice mentioned?” She indicated that they were consuming according to Autofac’s plan. If Autofac is no longer producing anything, how do they survive? Do they start pushing out past the previously-armed no-go zones? What happens when they find their doppelgÃ¤nger communities?

I feel like it’s a good sign that this one sticks with me the way it does – for good thought-provoking reasons rather than petty continuity issues.

Philip K. Dick's Electric Dreams "Real Life": Paquin and Howard Get In Each Others' Heads