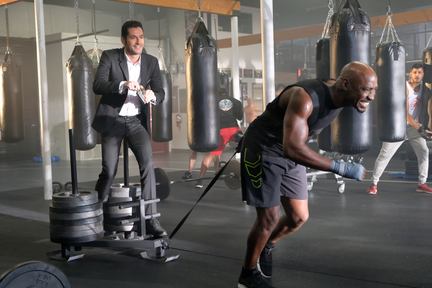 New Year’s Day is often a day used to reflect on the past. The gang over atÂ Lucifer chose to have us look back to the very (fictional) beginning – 2011, to be exact – when Leisure Suit Luci takes a vacation to L.A.

Into every hedonistic holiday, a little Amenadiel must fall it seems and Big Brother shows up to break up the party only to get mugged for his necklace (the importance of which we all knowÂ now) and shot in the chest while waiting for Luci to, ahem, finish up.

It’s a delightfully clever script, giving us glimpses into the 2011 lives of our main Scooby Gang along the way. Chloe and Dan are still married at the time, planning date nights, with Chloe hungrily working towards detective status.

Charlotte Richards even gets an appearance, as Chloe runs down leads connecting some of Charlotte’s less savory clients to a murder committed by the mugger who shot Amenadiel. The clues point to MMA fight-fixing with the victim’s trainer GilÂ (Chris Mulkey, Boardwalk Empire) mentioning that there had been an offer on the table.

The chicken was most definitely my favourite part of the exercise routine. Not exactly sure where Lucifer found one but I’m willing to suspend my disbelief for that sight gag.

There was a little something for everyone here. Lots of sight gags and inside jokes alternate with gorgeous little moments foreshadowing the adventures we’ve already shared with these characters. When Chloe and Lucifer end up side by side at the fight palace, it’s an electric moment as Luci’s divine senses perk up as their ships pass on the mezzanine.

The real revelation is in how this flashback explains how Lucifer turns his holiday into permanent retirement. All the elements are arranged in heavenly alignment – Misty’s comment about how if you really want to rebel, move to L.A.; Gil’s confession that the fighter he’d thought of like a son had prefered to walk away rather than play along with his little scheme; Amenadiel’s blank cheque repayment for retrieving his necklace; and Mazikeen’s (oh my LORD what a get up her Hell work clothes were!) bizarre exhilaration at the possibilities the mortal world presents.

And the irony at the crux of this foundational tale is that the very angel sent to bring Lucifer back to his throne is the reason he turns his back on that role. There’s very real hurt in Luci’s demeanour when his big brother calls him evil.

After all, the nature of angels is righteous and, by definition, good. For Lucifer to realize that his punishment is for everyone in Heaven as well as on Earth to see him as the embodiment of Evil is what really clarifies for him his level of job dissatisfaction. Also, it moves him to jump into the cage for a bloody and bitter confrontation with the undefeated Champion of Heaven.

Brother on brother violence is always hard to watch and the spite and spittle flows freely as they take each other on. It’s Amenadiel’s instinct as the older sibling, the one more willing to sacrifice, that brings the fight to a close with him tapping out. It’s a credit to both the writing and the performance, that we see palpable change taking place in him as he recognizes his own shortcomings.

So once the all-important necklace is retrieved and the killer (Gil) dropped into the lap of justice blubbering his confession after a shot of Luci’s Devil-face, Lucifer proclaims his intention to remain in the City of Angels and Amenadiel has his hands (wings?) tied by his own oath.

Although there was a noticeable absence of (baby) Trixie, the not-yet-moved-to-L.A. Ella, and Dr. Linda, this was quite the New Year’s treat. Hopefully, it’s enough to tide us over until January 22 when the season returns with all new episodes.