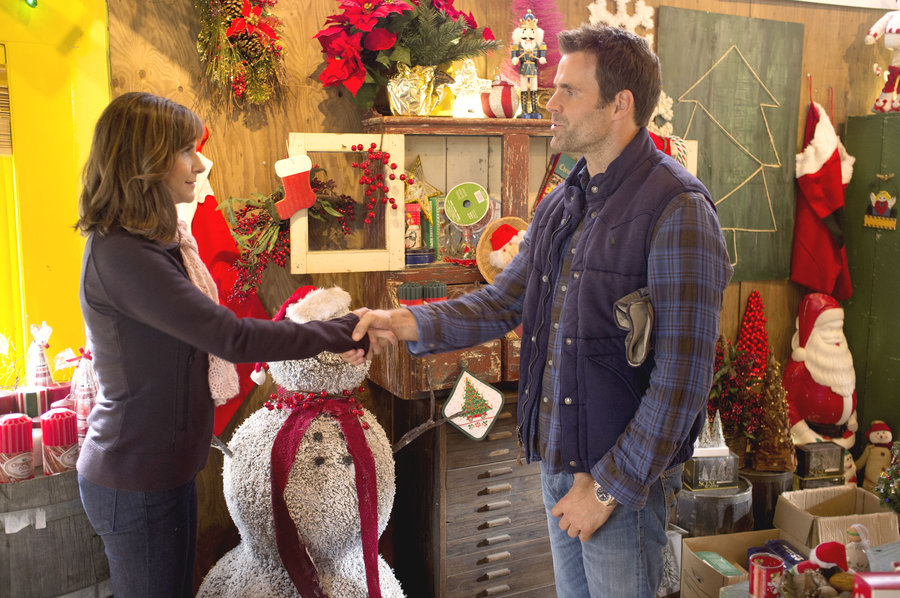 Next up in our 12 Days of Hallmark Holiday Favorites is Cameron Mathison. True confession: I never watched All My Children, and ET and Dancing With the Stars are not my jam, so I only discovered Mathison through his Hallmark affiliation, and I’ve had the good fortune to chat with him twice for TV Goodness. Spoiler alert: he’s a gem.

I really liked My Gal Sunday, which was a springboard for a franchise that never took off, but it wasn’t until The Christmas Ornament that he hooked me. He’s since followed that with three other holiday roles.

2013 found Mathison in two holiday films, one as the lead and another as a supporting character. The Christmas Ornament is a wistful “what if” tale about Kathy (Kellie Martin) a widow working hard to get through the first Christmas without her husband, while also trying to manage their business and get a new venture off the ground.

When she meets Mathison’s Tim, who’s running the local tree lot, she sparks to him and is immediately guilty that it’s too soon, but then she realizes maybe it’s not at all. Her husband isn’t coming back, and perhaps meeting Tim was a gift. It’s a really lovely, quiet film that I missed in first run but found a year later and ever year after it’s been required holiday viewing. The final scene breaks me every single time.

In Window Wonderland, he plays the wealthy boyfriend of Supergirl‘s Chyler Leigh. Leigh and Paul Campbell portray retail workers who land in the middle of a Christmas window dressing competition, with the winner keeping their job. Since Mathison’s a little further down in the cast list, you can guess how that goes for his character.

The Murder She Baked franchise cast Mathison as Mike, a detective who lands in town just as a murder case falls into his lap, and as he stays on, he develops a relationship with Hannah (Alison Sweeney), who runs a local bake shop. She’s also an amateur sleuth so their path to romance is fraught with stepped-on toes, but they get there. The last film left the door open for more movies to follow but there’s no word yet on that. Trust me–I want a follow-up or four as much as you do.

Until Just Desserts last March, 2015’s A Plum Pudding Mystery was my favorite of the series. In it, Hannah stumbles onto a murder scene at a Christmas tree lot, and her involvement in the case gets more treacherous, which finally prompts Mike to make a move. Mathison appeared throughout the film vs. some of the other installments that used him to a lesser degree, so it was a chance to really see his chemistry with Sweeney shine.

Last year, Mathison starred alongside Mira Sorvino in A Christmas to Remember, playing a small town veterinarian and widowed single father who finds romance with a TV host who’s rendered amnesiac by a car accident and stays in town to recover.

As she tries to figure out who she is, she bonds with him and his children and finds a truer version of herself. It’s also a really sweet film, and gives us a chance to see Mathison with animals and kids. I mean, come on.

A Christmas to Remember airs Thursday night at 9 pm/8c and Friday at 3 pm/2c as well as several times next week on Hallmark Movies & Mysteries; it’s also available on YouTube.

A Plum Pudding Mystery isn’t back on Hallmark Movies & Mysteries until January 14th, but you can buy it on DVD or Amazon Video.