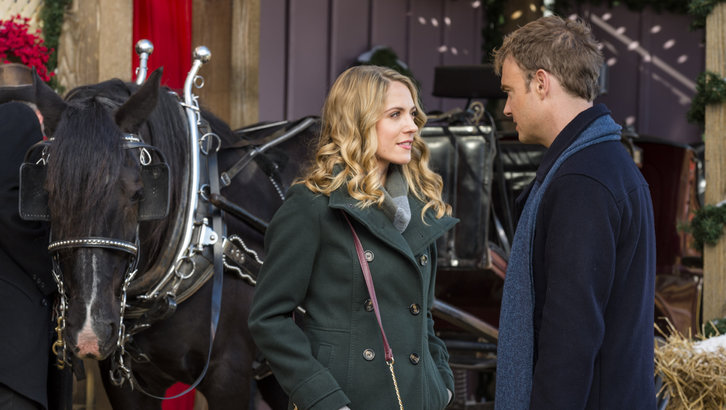 Up next in our mission to spread the good word on some of the actors populating our favorite Hallmark holiday movies: Brooke Nevin.

This season, the actress stars in The Christmas Cure along with one of Heather’s choices, Steve Byers.

To be honest, Nevin became one of my favorites long before she made a mark in the Hallmark universe.You see, back in 2005, she guest starred in one of the best installments of the very first season of Supernatural, “Asylum.” It offered up a great case-of-the week and was a pivotal episode for the demon-hunting Winchester brothers.

Katherine (Nevin’s character) along with her boyfriend (future Gotham and Trial & Error star Nicholas D’Agosto) snuck into an abandoned asylum and proceeded to get the scare of their lives. But in the process we got to see Katherine be way more badass than Gavin, which climaxed with her dumping him at the end of the hour. Good times.

Then Nevin went and starred in a series I adored. It was called Breakout Kings and it aired on A&E. She played Jules, the resident tech expert who was a bit of a hot mess because of her depression, serious social anxiety issues and a tragic backstory. Breakout Kings ran for two brief but memorable seasons.

I also think she was wonderful on CBS’ Scorpion. But I’m here to talk about Nevin in regards to Hallmark. Her credits include 2016’s Journey Back to Christmas, 2015’s Signed, Sealed, Delivered: From Paris with Love and 2009’s Come Dance at my Wedding.

The two holiday movies I’d like to highlight are 2015’s On the Twelfth Day of Christmas and this year’s offering, The Christmas Cure.

I adored On the Twelfth Day of Christmas. In fact, a re-watch is in order. Nevin appeared in this movie with the awesome Robin Dunne of Syfy’s Sanctuary.

We see Maggie and her crush Mitch in college where he’s a DJ for the school radio station. Mitch ends up giving her a ride home and when bad weather threatens to ruin her Christmas, Mitch injects some holiday spirit into their journey. This includes making snow angels.

Cut to ten years later when Mitch moves to Maggie’s small town. She’s a reporter for the local paper. And he’s just started a new gig as an on-air host at one of the town’s radio stations. This was clearly a step down because his previous gig was in the second largest market in the country (that would be Los Angeles). What’s cool is that the two are quickly able to reconnect. What’s not so cool is that Mitch no longer has the Christmas spirit. He’s a bit of a Scrooge, actually. He might as well utter “Bah Humbug” to all of his listeners.

Maggie turns Secret Santa in order to help resurrect Mitch’s Christmas spirit. Of course, this becomes a bigger deal than Maggie ever thought it would when the paper she writes for thinks this mysterious gift giver is the key to getting more eyes on their publication. The whole thing blows up in her face in good and bad ways.

I don’t know. It’s just a cute movie. Nevin and Dunne share a fun chemistry. And while Mitch tries to figure out who’s sending him presents inspired by the 12 days of Christmas, it’s sweet to see the two solidify a connection. Love Nevin in this movie.

In The Christmas Cure, the actress plays Vanessa, an emergency room doc in the big city (L.A.,once again). She has an awesome bedside manner. She’s an up and coming doctor who is on the shortlist for the Head of Trauma position at her hospital.

But when she goes home to her small town, she finds out her doctor dad (Dallas‘ Patrick Duffy) is retiring, she reconnects with her high school (and some of college) sweetheart and she’s forced to rethink the trajectory of her life.

And as much as I’ve grown tired of the big city bad, small town good scenarios that so many of these holiday movies seem to have, I still fell for this movie. I liked seeing Nessa help her brother out with his crush. I think Nevin and Duffy made a great father/daughter team. And it was nice seeing Vanessa and Mitch (Byers)…wait up. Just realized that both of Nevin’s characters in On the Twelfth Day of Christmas and The Christmas Cure fell in love with a Mitch. Who knew?

Anyway, this movie is one of the more entertaining ones of the season.

Where you can see Nevin’s Christmas flicks before the end of the year: