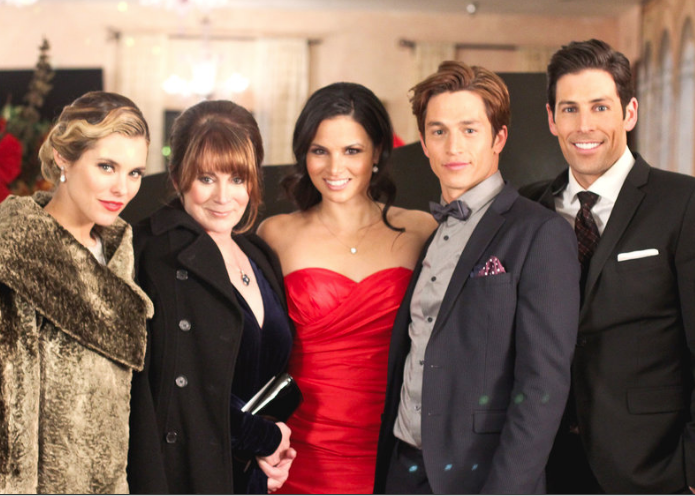 This time of the year we’re watching and loving a lot of holiday movies â€” current and classic â€” especially on Hallmark. So we decided to show our appreciation for its actors. And while we do appreciate all of them, we’re spotlighting a few of them all the way up until Christmas.

She hasn’t actually starred in a Hallmark holiday movie in a couple years so I hope in 2018 she’ll pop up in a new project.

What’s great about Law is how she balances such different roles. I know her best from her roles as a badass assassin (the CW’s Arrow), a ride-or-die cop (CBS’ short-lived Training Day) and even a fierce house slave (Starz’s Spartacus series).

In her two Hallmark holiday movies her characters haven’t been called on to kill or maim anyone, obviously. In Snow Bride, she plays Greta, a reporter at a tabloid magazine. And in 12 Gifts of Christmas, she’s Anna, a struggling painter who ends up dabbling as a Christmas gifter, which in this world means she’s a personal shopper with an extra knack for finding the right presents during the most wonderful time of the year.

In 12 Gifts, we get to know Anna and her family. And once she becomes the Christmas gifter for Aaron O’Connell’s uptight corporate character named Marc, we get to know his family as well. It was awesome to see how easily his mom, dad and sister accepted Anna into their family. They quickly grew attached to her so when Anna and Marc finally got together at the end of the movie, it was a really sweet moment.

And while predictable, it was also nice to see the effect Anna and Marc had on each other’s lives and dreams, even though things got a bit bumpy as they do in these types of movies. But because Aaron took a chance on Anna, her painting aspirations took a step forward. And because of Anna’s influence, Aaron was able to reconnect with his family in a way he hadn’t in a long time.

And one more factor made this movie memorable: the presence of Donna Mills, which is always welcome. I also loved seeing O’Connell in this lead role. The only thing I’m going to forget is Anna’s Santa painting that Marc used for his ad campaign. I ended up concentrating on Marc and Anna getting their happy ending instead.

Moving on to Snow Bride. I’m not usually someone who enjoys the whole persistent reporter who hides her true identity in order to do anything to get the juicy story schtick, but for Law, I did. Of course Greta would end up falling in love with the Kennedy-esque guy she tries to get the goods on â€” that was inevitable.

This movie gave good scenery considering it takes place at Big Bear mountain resort (or whatever Canadian location subbed in for Big Bear — Editor’s Note: actually, this movie was indeed filmed at Big Bear. How awesome is that? Thanks Tracy!). And much how Law and O’Connell shared a nice chemistry in 12 Gifts, so did Law and Snow Bride‘s main man, Jordan Belfi.

In the future, I hope Law revisits the Hallmark universe.

You can catch 12 Gifts of Christmas on Hallmark Channel Tuesday, Dec. 19 at 2pm/1c. It’s Snow Bride‘s turn to repeat Thursday, Dec. 21 at 8am/7c also on Hallmark.