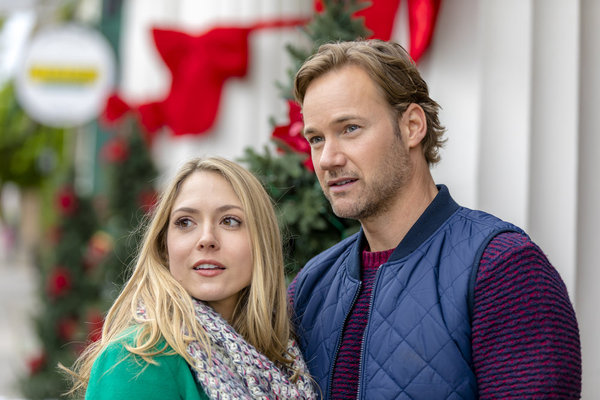 We’re 12 days out from Christmas, so it’s a perfect time for us to countdown our holiday TV movie favorites. One of the great things about so many networks competing in the maze of Christmas TV programming is that Hallmark Channel and Hallmark Movies & Mysteries open the vault. That means we get to revisit a treasure trove of oldies but goodies on top of the latest class of newbies, headlined by some our favorite TV folks. From now until Christmas, join us as we show them a little love! First up: Steve Byers, who has two Christmas titles on Hallmark Channel.

This year, Byers co-stars alongside Brooke Nevin in The Christmas Cure, playing Mitch, the long ago, longtime school sweetheart of Nevin’s Vanessa, a successful doctor now living on the other side of the country. When she returns home for Christmas, it stirs up all sorts of emotions for herself, her family, and Mitch.

Mitch is a super good guy who stayed home and built a life for himself, and while he may not have openly pined for Vanessa in her absence, those old feelings and memories return when they fall back into an easy familiarity. Plus, her family adores him, so there’s that. Byers makes us root for Mitch, even when he retreats a bit to let Vanessa come around on her own.

It’s a really sweet story and Byers and Nevin share a fun chemistry together. They’d previously co-starred in a Season 2 episode of Call Me Fitz, so they had their own offscreen camaraderie to call on. I interviewed Byers for The Televixen last summer just after he wrapped the film, and he said they had a ball shooting it, which is readily apparent to anyone watching.

Before The Christmas Cure, Byers starred opposite Shannon Elizabeth in 2013’s Catch a Christmas Star. That one had him in Dad mode, as Chris, a widowed single father who finds himself reconnecting with his high school sweetheart, Nikki (I’m sensing a theme…). She’s now a successful pop star, and his preteen daughter, who’s currently infatuated with her, starts plotting when she finds out her Dad and Nikki have a history.

It’s a bit of a reversal for the typical Hallmark fare as we spend a considerable amount of time on Chris’s point of view while he balances grief and the thought of moving with the added glare of a celebrity spotlight. He’s on his own with that struggle, since his children are completely on board with the potential new romance.

Byers and Elizabeth are very good playing a couple who never completely got over each other and are equally excited about and terrified of opening old doors and old wounds.

We haven’t seen Byers headline a non-holiday Hallmark movie. Fingers crossed, we will, so it’ll go in the rotation and we won’ have to wait until next summer for the Christmas in July reruns.

If Byers looks familiar to you, but you can’t quite place him, he’s recurred on several shows over the years, including Season 2 of one of our faves, Alphas, and the first two seasons of Amazon’s The Man the High Castle. Last year, he went really dark in the first season of Netflix’s Slasher and survived a dalliance with Mary Queen of Scots in the final season of Reign.

In 2018, you can find him recurring on Freeform’s Shadowhunters beginning in April, and if gaming is your thing, look for him as Nick Rye in Far Cry 5, which drops in March.