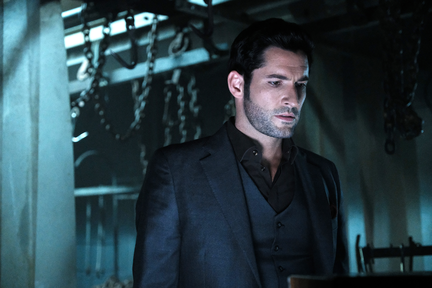 After a short detour through some one-off (and pretty freakin’ awesome) adventures, we return to the hunt for this season’s Big Bad just in time for next week’s mid-winter finale. Talk about delaying gratification. Sheesh.

The Sinnerman has been a shadowy figure since the start of the season. Apparently a well-known, almost mythical figure of the underworld, capable of orchestrating and executing a string of calculated killings, he has seemed bent on ruining Lucifer’s fun, returning his pesky wings and stealing his ability to morph into his scary Devil face. Oh, and having him kidnapped and dropped off in the desert at the end of last season.

Two brutal killings kick off this most recent investigation although they aren’t immediately tied to The Sinnerman. Since Lucifer’s return to his role of granter-of-favours, we get a lot more flashbacks to the starts of beautiful friendships. And The Sinnerman likes picking off those friends in nasty ways which our adorable Ella is always fascinated by.

Joey Pileggi (Andy Cohen, Ray Donovan) is a ballsy young man looking to get in with the mob and although you’d think that would be enough to get him a quick exit, it’s his connection to Lucifer that gets him killed. It’s even rather sweet how much his mob buddies care about him as exhibited when Frankie “the Knife” (Andy Davoli, The Sopranos) vows to kill the killer.

When Lucifer finally (literally) answers the call and makes contact with The Sinnerman, he ends up lured into a trap of ironic frigidity. I got to hand it to Mr. Sinnerman, locking The Devil in cold storage, making his Hell freeze over, has a fun sort of crazy stirred into it.

Meanwhile, we are kept spinning by a variety of strange pairings throughout our cast of characters. Dr. Martin and Amenadiel are acting quite cozy which irks the newly-returned Maze to no end. Honestly, I’m not totally buying her jealousy but her little scene with Linda at the end is rather touching and shows some sweet personal growth in our favourite bounty-hunting demon.

Decker got some sort of itch needing to be scratched by the recently-recovered Pierce. And we finally get a little glimpse into his motivation on the Sinnerman case. Allegedly. There’s still something about Pierce that doesn’t ring perfectly true and I’m not sure his whole “Sinnerman-killed-my-brother” tale is on the up-and-up.

And, finally, Charlotte Richards (now the newest member of the D.A.’s office and no longer housing the goddess of all creation) is feeling pretty vulnerable and insecure and grateful to the always confused but kind-at-heart Espinoza.

To be honest, the reveal and initial arrest of The Sinnerman was a little underwhelming at first. Nothing about him once Decker was dealing with him in the flesh seemed to be impressive enough to be able to take on Lucifer. So when he stabs out his own eyes in the interrogation room (and who the heck leaves a suspect in a mass shooting unsupervised anyway?) to prevent Lucifer playing his “parlour trick”, it was satisfying to recognize “oh yeah, that’s the nut we’ve been chasing” … but I still hate a cliff-hanger.

Luckily, we’re only a week ago from some of our answers. On the Plot A front, we have Lucifer figuring out who (or what) his nemesis truly is. Lurking behind that, is what Pierce’s real role is and how Chloe’s gonna be dragged into all this. As much as I like Decker and her natural counterpoint to Lucy, lately she seems to be more of a passenger on all the shenanigans, just riding the wave wherever it crests.

On the Plot B front, Dr. Martin’s friendship with Maze and romance with Amenadiel are in direct conflict and while Amenadiel has a lot to offer, Maze will probably hurt them both a LOT if she feels her trust is betrayed. Again, not sure if her possessiveness of Amenadiel makes a lot of sense especially since the last time we saw her, she was making personal connections with her bounty hunting targets.

The scene here that really made me think on an existential plane was disguised as a comedic blip. While Lucifer pulls Dr. Martin’s chain with the whole “angel school” thing, she poses some really brilliant questions about the nature of the angelic chorus. If, as Lucifer asserts, angels simply come into being with their special powers fully-formed, then does that unique ability shape their personality or is their power a reflection of their personality?

What You Need to Know About HISTORY's Knightfall

Chelah Horsdal Talks Hell on Wheels, The Man in the High Castle, and You Me Her [Exclusive]