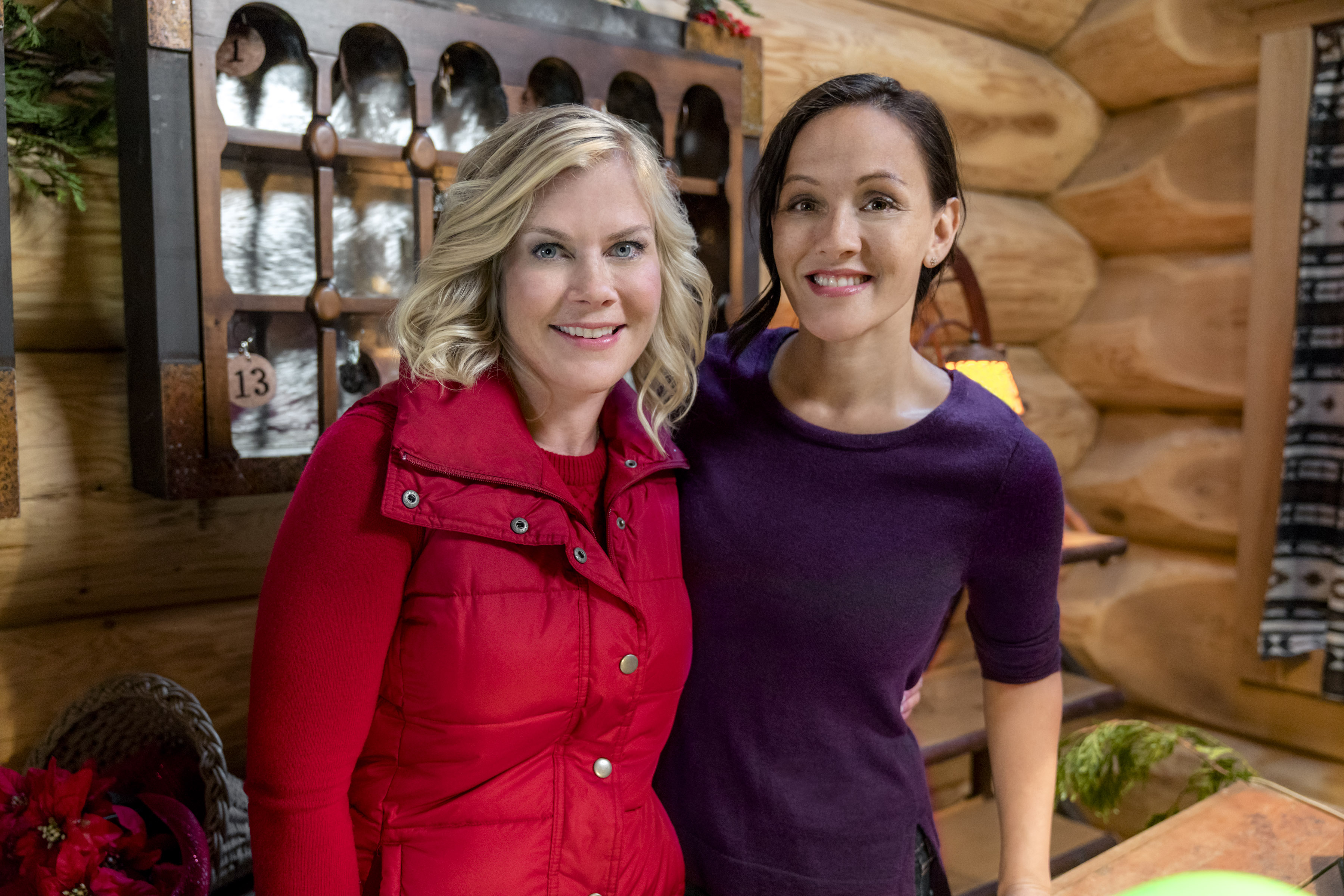 Fa-la-la-la-la kicks into high gear with the turn of the calendar to December, with new offerings Saturday and Sunday on Hallmark Channel, Hallmark Movies and Mysteries, and Lifetime, plus newbies Sunday night on ION Television and UP Television. Here’s a tease of each of the new films. Fun fact: Father and son Beau Bridges and Jordan Bridges appear in two of this weekend’s new offerings. Click on the titles below to go directly to each movie’s web page. Times listed below are first airing; all repeat through the end of the year.

Evergreen, Vermont is an idyllic small town with a cafÃ© that holds a wish-granting snow globe, if you’re a believer in that kind of holiday magic. Veterinarian Allie (Ashley Williams) makes her wish to have the most romantic Christmas ever. It comes to pass in an unusual way after she crosses paths with a businessman (Teddy Sears) and his daughter (Jaeda Lily Miller), who help her out when her car breaks down on the way to a vacation with her long-distance boyfriend, Spencer (Marcus Rosner), and they all suddenly find themselves stranded at the airport by a snowstorm. Holly Robinson Peete, Barbara Niven, and Van Helsing‘s Rukiya Bernard also star.

Angel Gabby (Rachel Boston) gets a special assignment and is dispatched to the town of Angel Falls, which has lost its Christmas spirit. Charged with helping the residents recapture it, she befriends Jack Avery (Paul Greene), the Volunteer Fire Chief, who’s initially skeptical about her plan to revive the local Yuletide cheer.

Gabby takes a job at the local church as the volunteer coordinator and begins recruiting residents to get the town’s holiday back on track. In the process, she has a surprising revelation about herself and her own dreams that sends her down an unexpected path. Beau Bridges also stars. The film reunites Boston with her Witches of East End showrunner, Melissa De La Cruz, who co-wrote the script with David Golden.

Event planner Chloe (Arielle Kebbel) embraces the challenge of planning the local Christmas festival but confesses to her Mom (Markie Post) that the ship has sailed on finding Mr. Right. That changes when she meets Evan (Corey Sevier). The two begin a whirlwind romance, but then he’s transferred overseas for work and they spend the next three Christmases crossing paths without getting back together. Will a touch of Santa’s magic on their fourth Christmas Eve finally do the trick? I think the title is a clue.

This one is a little twist on 2013’s Let It Snow as Alison Sweeney plays Sophie, who runs the struggling Evergreen Inn. Unbeknownst to her, a major developer has his eye on her home and has sent Evan Hunter (Jordan Bridges) to evaluate the property. Evan’s plans to just spend one night change when he meets Sophie. When she finds out who he is, she must convince him the lodge is a bad investment, while trying not to fall in love. Sheryl Lee Ralph, Crystal Lowe, and Toby Levins also star. Melissa Salmons, who wrote Sweeney’s Murder She Baked: Just Desserts and The Irresistible Blueberry Farm, wrote the script, directed by Hallmark first-timer Jem Garrard.

When Marie (Jessica Lowndes) begins receiving ornaments from her mother, a new coincidental blessing comes with each one. Marie’s once-lost Christmas spirit gets another boost when she meets her handsome neighbor, Nate (Brendan Penny), and feels a spark with him while celebrating the season. That is until an old love who broke her heart resurfaces on an editing assignment. Suddenly feeling lost at work and in love, Marie looks for a Christmas miracle to give her the confidence to get back on track in both. Tim Matheson also stars.

The Spruces and The Pines — Sunday, December 3rd at 8/7c (ION Television)

Pamela (Ashley Jones) is on a budget, but that doesn’t stop her son Westin (Jax Connolly), from dreaming big about Christmas. Can she find a way to make his Christmas merry? Perhaps, when Baxter (David Blue) who wins a small fortune decides to share his winnings by acting as a Secret Santa to people in a small town.

Well, this one is timely. Felicia (Marina Sirtis), a high-ranking executive for the royal family of Madelvia is sent to the United States by the Queen (Jane Carr) to disrupt the relationship of their crown Prince Alexander (newcomer Callum Alexander) and his girlfriend Samantha (Alexis Knapp), a dedicated teacher in Manhattan. In spite of Felicia’s machinations, the relationship progresses and Samantha must decide if she loves Alex enough to make the transition from teacher to royal. Charles Shaughnessy, Parker Stevenson, and Pamela Sue Martin also star.

Lucifer Comes Face to Face with "The Sinnerman"

Dancing with the Stars "Season 25 Week 10" The Finals