There’s A Lot Going On When “Chloe Does Lucifer” 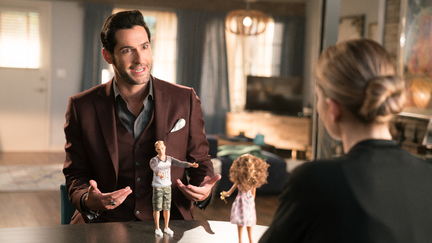 A typical one-hour serial procedural usually runs an A Plot and a B Plot. Sometimes, there’s a funny C plot or one that moves along a long arc story that’s building towards the season climax. That’s three stories to spin with appeal. Just three? Pfft… amateurs.

Because the Lucifer writers have been throwing balls into the juggle pattern over the last season, the ambition exhibited here is boggling as they seek to address elements introduced through the Charlotte Richards story, last week’s Reece Getty story, Lucifer and Amenadiel’s brotherly bickering, as well as fall-out from Dr. Linda’s up-close-and-personal with death in last season’s finale.

But most importantly, we get Trixie Time here not once, not twice, but in THREE scenes. The episode opens with a fun little scene where Lucifer hunkers down with Decker-Trix for a night of glitter face paint, lollipops, and Monopoly.

Later, she gives her mother some advice on how to pick up strangers and hands Lucifer a juice box. In the closing moments, she debriefs the sting operation with her mom. As you do when you’re the daughter of two cops.

The Plot A is the murder of a computer engineer with a SUPER annoying, social media compulsive roommate, Esther (Mikaela Hoover, Two Broke Girls). Adjacent to THIS is Lucifer’s ire at Amenadiel calling him boring and his subsequent need to prove that he is a “top hat” not a “shoe”.

What the writers do brilliantly in this pinball machine of our core cast is then to bounce Amenadiel into Dr. Linda’s court where she is in the midst of planning the memorial for her deceased ex and dealing with the emotional whiplash that hits her as she finally comes to terms with dying in last season’s finale.

Her line about being upset about not being more upset is incredible and taps into the weirdest phenomenon about death — expectations. That she knows exactly what happens after death is another factor in her stress level. Mind you, planning to accommodate 350 guests at a memorial is pretty over-the-top stressful already.

This affords us the rare opportunity to see Ella flustered as she can’t turn around (or hide under her desk) without running into the leggy blonde with altruism-deficiency.

More than just an awkward laugh plot, this interaction leads to a break in Decker’s case as well as a hint that we’ll be seeing more of Charlotte as she gives up her high-powered, well-paying law firm position to work as a public defender in the D.A.’s office.

Everyone gets to feel discombobulated this episode as Decker’s sting involves her transforming into a female Lucifer, or Lucinda, in order to flush out a killer. Eventually, she does her best detecting when she lets herself be herself, something all the other characters seem to be struggling with still.

Lucifer’s goal to prove himself “interesting” by hanging out with the people he perceives to be Alphas falls through as, one by one, they are proven to be charlatans and liars. When he uses the Top Meet app phony-in-chief’s narcissism to disarm him (a helluva metaphor, btw) they put Mack Slater’s (Michael Rady, UnREAL) fraudulent (and murderous) spree to an end and the case to bed.

As interesting as the many spinning parts of this episode were, it sort of felt like the revving of the engines before the flag drops. Every part of the show got wound up tonight in preparation for the big confrontation that’s coming but the question is whether that high anticipation can be sustained for TWO. WHOLE. WEEKS.

I guess we’ll just have to wait and see.

LuciferÂ airs Monday nights at 9pm ET/PT on FOX and returns with a new episode on December 4th.