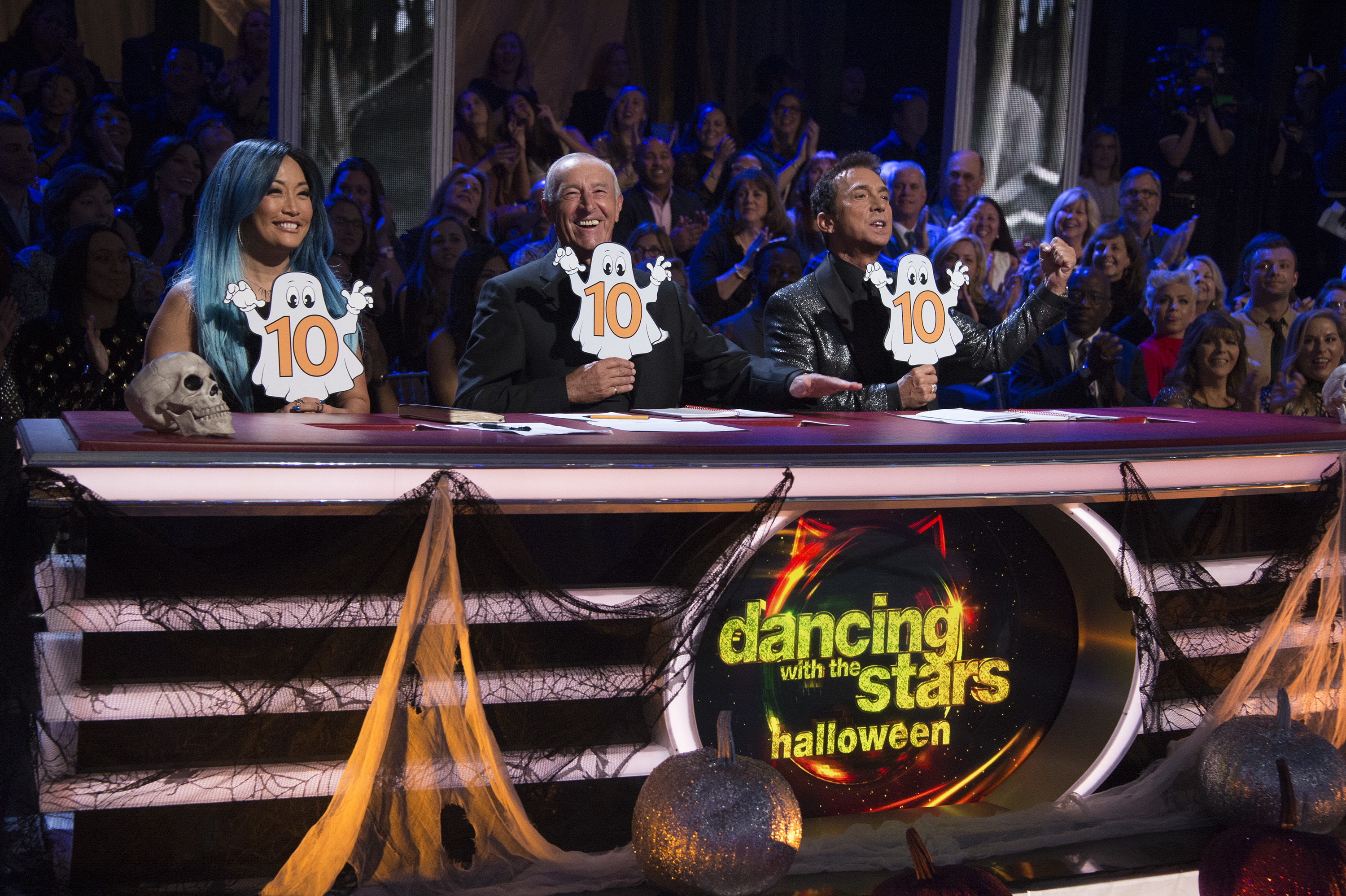 DANCING WITH THE STARS - "Episode 2507" - The eight remaining couples have spent the week learning all of the bloodcurdling tricks that it will take to treat the viewers to some terrifyingly fun dances, as Halloween Night comes to "Dancing with the Stars," live, MONDAY, OCTOBER 30 (8:00-10:01 p.m. EDT), on The ABC Television Network. (ABC/Eric McCandless) CARRIE ANN INABA, LEN GOODMAN, BRUNO TONIOLI

A celebratory Rocky Horror Picture Show number kicked off this week’s Halloween fest on Dancing with the Stars. And it was time for team dances! Who went home? Letâ€™s put it this way: it was a shocker.

In other news, one celeb struggled with an injury, hoping it wouldn’t cost her the competition.

Victoria had some trouble opening herself up to Val during rehearsals. But what ever happened it didnâ€™t affect her in the ballroom. Their waltz was such a pretty dance. Bruno described it perfectly: “beautifully ethereal.”

Jordan is incredible. Thatâ€™s the best word I can find. Or how about this: it was spooktacular! (At least one pun for Halloween is a must) The performance was not only entertaining but the Paso Doble content was there. The judges enjoyed it as much as I did and rewarded Jordan and Lindsay with a perfect score.

I didnâ€™t love this dance. The song choice was unfortunate for a Jive. Carrie Ann noticed Nikki seemed to concentrate too much on her Jive flicks. It wasnâ€™t the worst dance. I think because there were a few mishaps it put Nikki in her head.

Vanessa needs to work at finishing her lines. he is a great dancer and a powerful performer. This dance also needed way more Paso. Is the strain in the relationship between these two the problem?

Cheryl is one of the best teachers on this show. Terrell has improved every week. For a big guy and having such a height difference with Cheryl, his holds are right on the money.

Poor Lindsey had to deal with a major injury involving a rib that was out of place. Despite being in a lot of pain, she tore through a very difficult routine and made it work! The judges noticed she struggled a bit but to the average eye, this looked like a perfect 30 dance. The judges didn’t give her all 10s, however. Lindsey received all 9s.

This dance set to the Police’s “Every Breath You Take” was creepy and really lovely at the same time. After last week Frankie really redeemed himself. It was mesmerizing watching the two of them totally in sync. The story and movement all worked well together. Frankie loves being a part of this show. He took this dance very seriously and I canâ€™t believe how much I heart him! And how great is it that Frankie and Witney’s contemporary performance received a perfect score?

Quirky and cute is how I would describe this dance. Much like Frankie, Drew had problems last week. This week, he returned to the dance floor with a fun performance. It looked like Emma fell but, lucky for her, the judges thought it was part of the dance, so kudos for covering that up. The lifts were done very well and the musicality was energetic, in tune and fun.

Before the Team Dances took over, some of the couples learned whether they were safe or in jeopardy.

The first couple safe: Jordan & Lindsay. Terrell & Cheryl were in jeopardy. Lindsey & Mark were safe. Nikki & Artem were also in jeopardy. Now they had to dance!

I have to say that these guys worked really well together. It seemed very long for a team dance and was impressive that they did it. Len thought it was a bit messy. There was too much going but they were great as separate couples.

Before the next team dance the pairs were told who was safe and who was in jeopardy.

I thought this was a much better dance then the first group. They were in step the whole time. As a group the chemistry was on point and flawless. It was a good mash up of different dances. Judges thought so too. They doled out another perfect score.

Now the in jeopardy couples would find out their fate.

The next couple who was safe: Drew & Emma. Terrell & Cheryl were also safe.

It all came down to Vanessa & Maks and Nikki & Artem.

The result: it wasn’t just one couple leaving the dance floor. Tom Bergeron announced a double elimination that no one saw coming! That is the shocker of the evening!

Tom: â€œI thought I got my agent a better seat.â€
Cheryl: â€œIâ€™m not used to compliments.â€
Tom: â€œYeah, Iâ€™ve never complimented you before.â€
Cheryl: â€œIs not a fan of compliments or clowns.â€
Lindsey: â€œThe Paso is a beast.â€
Tom: â€œIt was probably your imagination.â€
Len: â€œLast week you were dead and buried.â€
Erin: â€œIâ€™m just a killjoy and had to bring it up.â€
Erin: â€œYa, you look like you havenâ€™t missed a beat. Youâ€™ve let yourself go.â€
Len: â€œWould I lie to you people, I love you all.
Len: â€œShut the front door and call me Andrew Lloyd Webber.â€

We’re getting closer and closer to the finals! Time is flying. To me it feels like the season just started yesterday. Remember to vote because anyone could go home! Until next weekâ€¦.

We Need to Know: When will Will and Mac start acting like grown ups on HBOâ€™s The Newsroom?

True Detective “The Secret Fate of All Life”

The Flash “The Man in the Yellow Suit”