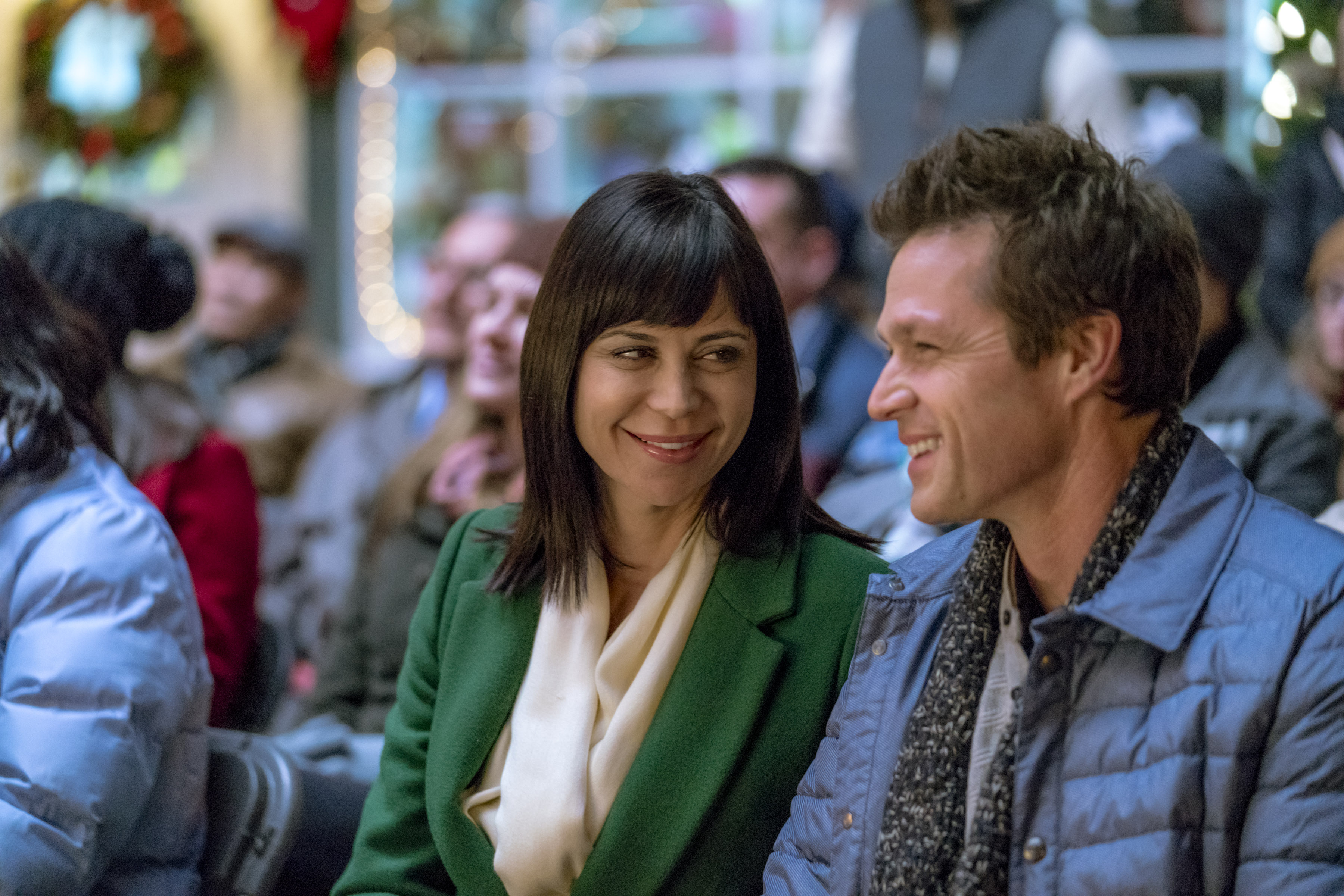 Catherine Bell has two Christmas movies this season on Hallmark Movies & Mysteries–Home for Christmas Day opposite Victor Webster, which sneak peaked in July and is now running on the network, andÂ Christmas in the Air opposite Eric Close,Â which premieres Sunday night.Â When I spoke with Bell last month for Good Witch, we also chatted about her holiday films.

After doing successive longterm runs on JAG and Army Wives, Bell’s nameÂ is somewhat synonymous with military-related projects, but nowÂ when they come around, she considers them carefully before jumping right in. “I find that I’m a little bit wary of doing the same things over and over, and if it has a military theme, I want to make sure it’s something different because there are so many great stories to tell there,” she says.

“When JAG ended and I got the offer to do Army Wives, my first inclination was [to say] no, not right after nine years of JAG, but IÂ read the script and it was so different and it was about the wives and the women and the family holding down the fort at home.”

“[Home for Christmas Day]Â came about from [Jennifer Aspen] a dear friend that I’ve known for 20 years from acting class back in the day. She came up with the idea. She drove me to theÂ airport one day and said, ‘I’ve got this idea. I’ll drive you and pick you up and tell you the idea.’ She pitched it and I loved it.”

“I have a teenage daughter right now, and going from having a little girl to having a young woman and trying to be the best parent you can along that journey, trying so hard to have her not to have to experience pain or bumps or things. I so related to that.”

“While it was a military theme, and that’s always so important and beautiful for me to be connected to,Â it was also about a woman and daughter and the challenges of letting her live her own life while preventing her from the pain she’dÂ gone through herself.”

The film has a really lovely,Â integral scene between Bell’s character, Jane,Â and Anthony Konechny, who plays Tyler, the love interest for her character’s daughter,Â Betsy (Matreya Fedor).Â Tyler isÂ about to be deployed and Jane has been dead-set against the fairly sudden courtship. Before he leaves, they finally talk to each other one-on-one and Jane explains herself to Tyler.

Bell loved that scene, too.Â “All the scenes were so easy to act with him,” she recalls. “I would just look in his eyes and the emotions would come,” she says. “It’s a beautiful story, I loved making that movie. It was a really great journey. The whole process of getting it made and filming it and watching it. I think I cried more than anyone else.”

Christmas in the Air is rare lighter fare for Bell, and it’s one of the reasons she leapt at the chance to do it. “It’s kind of the opposite [of Home for Christmas Day].Â It’s a romantic comedy. Probably just what you want right before the holidays,” she explains.

“It’s With Eric Close, who is adorable. I play a personal organizer and he’s a boy-at-heart toy inventor. He has two kids, I have none. We’re kind of the most unlikely pair because he’s a mess and all over the place, but he’s cute and boyish and charming and creative and has a beautiful life force and my character needs to lighten up and loosen up .”

“They sent me the script. It was all ready to go. I sat down and read it front to back and instantly called Michelle Vicary and said, ‘Yes, please. This would be just a blast.’ It’s literally a romantic comedy…cute, adorable, two unlikely people falling in love. We had a blast filming. I got to go to Vancouver inÂ March/April. It was stunning,Â just between the snow going away and starting to warm up.”

If youÂ follow Bell’s Twitter feed, you may have noticed she has a link for beautycounter.com on her page. She shares the linkÂ with her fans to create awareness of earth- and body-friendly cosmetics. “These women, their whole mission [was] to create safe, non-toxic [cosmetics]. There are so many chemicals in cosmetics that cause cancer and are endocrine- and hormone-interrupting and get in our bodies and mess up the way our bodies function,” she pointsÂ out.

“The laws governing that haven’t changed since 1938. There’s something like 1500 chemicals banned in Europe that are allowed here and they’re going into the largest organ in your body, your skin. They told me aboutÂ [the site]Â and I fell in love.”

Christmas in the AirÂ premieres Sunday at 9 pm/8c on Hallmark Movies & Mysteries. Home for Christmas Day repeats SaturdayÂ at 7 pm/6c. Both filmsÂ will repeat several times through the end of the year. Here are a couple of sneak peeks.

Ella and Lucifer Hunt For Candy in "Vegas with Some Radish"