Lucifer Isn’t Keen at First to “Welcome Back Charlotte Richards” 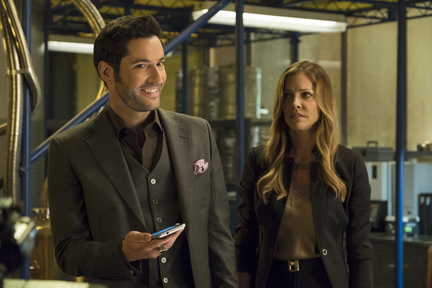 The proof is in the pudding this week… well, at least the body is as a pudding scientist, Simon Fisher (Jeff Bowser, Everybody Hates Chris),Â  is killed in a vat of his closely guarded secret recipe.

This disturbs our resident pudding enthusiast, Espinoza, deeply but not as much as the pudding company’s legal counsel does. “Welcome back, Charlotte Richards”, indeed. Tricia HelferÂ (Battlestar Galactica) returns as the high-priced attorney after her body was vacated in last season’s finale by Lucifer and Amenadiel’s Creation Goddess mother.

She seems to be suffering some after-effects of the whole being-possessed-by-an-all-powerful-goddess-after-being-murdered experience. She’s very obviously not living in the home with her husband and children anymore and talks to herself regularly to convince herself that she is not crazy. With no memory of the time she was possessed, she is barely holding it together with routine and make-up.

The first suspect Decker and Lucifer go to question is the primary pudding competitor, Grace Foley (Suzanne Cryer, Silicon Valley) who, it turns out, needed Fisher alive since he had offered to sell her his recipe. Lucifer is enamoured with her Heavenly Pudding commercial shoot as scantily-clad female angels lick spoons in every corner of the set.

Oh, the tangled webs that corporations weave for the almighty dollar! The investigation next reveals that Fisher was being played and that Foley had worked out a merger deal with his company president, Adrian Yates (Matthew Yang King, NUM3ERS).

The biggest reveal is that the secret pudding recipe is actually toxic and damages the kidneys over long-term exposure. Ella’s epiphany is played out with a dramatic smacking of Espinoza’s pudding cup out of his hand. She also manages to weird out Charlotte with a snake-eyes gesture which made me laugh out loud.

Fisher’s death turns out to be a suicide in an effort to force the truth about the pudding recipe but the whole episode is more about Charlotte trying to figure her life out and Lucifer trying to figure her out since he suspects her reappearance in his life is Daddy sticking his finger into things again.

It’s humourously confusing for Charlotte, not knowing why Espinoza is shooting her such puppy eyes and misreading Lucifer’s interest in her for romantic. Her sudden lip lock leaves him mildly traumatized but they have a rather touching sharing of personal issues and when she reveals that she was in Hell while her body was possessed and wants to never go back, Lucifer feels obligated to help her tip the scales in the other direction.

This ties in beautifully with the opening Trixie encounter where he states that accountability is a joke. When he recognizes that Charlotte is an innocent that suffered immensely for getting caught up in his mother’s shenanigans, he feels responsible for her “second chance”.

I’m always a sucker for Trixie episodes and Decker’s little talk with her at the end plucks my mommy heartstrings something fierce. Love love LOVE the line about how you can always find a loophole if you’re looking for one. Although the writing here wasn’t quite the brilliant genius of the preceding ones this season, they really hit the right note with Chloe and Trixie.

It’s a credit to the show that they never let us forget that Chloe is a mother who struggles with decisions and questions the ones she makes and is willing to learn from the mistakes. It’s even more powerful that, despite all the craziness of her involvement with Lucifer and his entourage, Trixie remains her touchstone and centre.

Dancing with the Stars "Season 25 Week 6" aka Movie Night

The Vampire Diaries “Bring It On”

Dancing with the Stars: Season 16, Week 6

Moment of Goodness: Hayley and Jackson, The Originals â€œCrescent Cityâ€