Dancing with the Stars “Season 25 Week 6” aka Movie Night 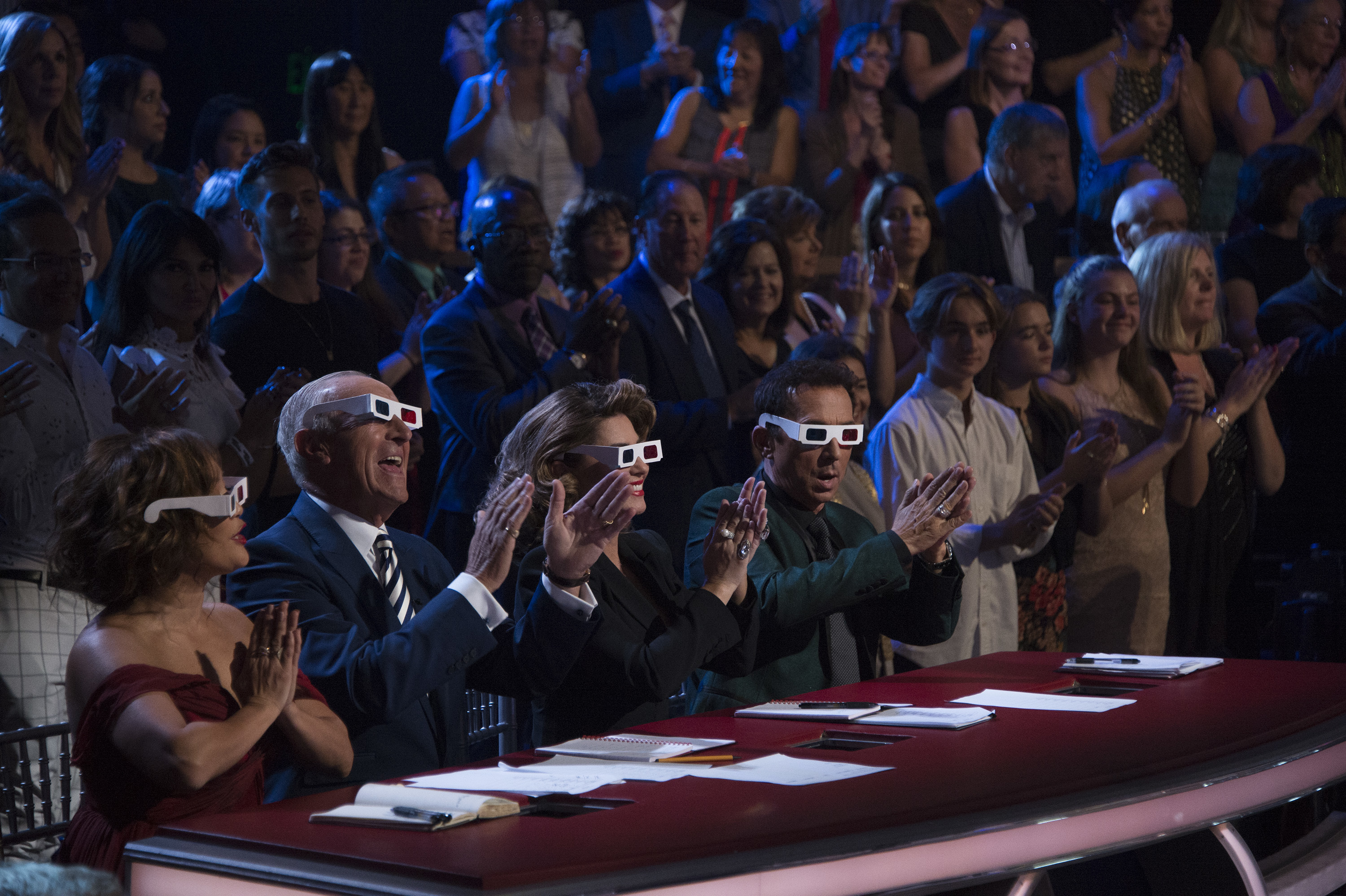 DANCING WITH THE STARS - "Episode 2506" - The nine remaining couples set their sights on the glitz and glamor of Tinseltown as they dance to celebrate "A Night at the Movies," on "Dancing with the Stars," live, MONDAY, OCTOBER 23 (8:00-10:01 p.m. EDT), on The ABC Television Network. (ABC/Eric McCandless) CARRIE ANN INABA, LEN GOODMAN, SHANIA TWAIN, BRUNO TONIOLI

Who doesnâ€™t love a large scale Hollywood opening number? Well, thatâ€™s how ABC’s Dancing with the Stars kicked things off this week.

The show also upped the celebrity presence with guest judge Shania Twain. She not only doled out scores but also sang her heart out.

The Week 6 theme was Movie Night, which meant each pro/celeb pairing selected a film genre and gave their own take or interpretation…in dance form, of course. Let’s see how everyone did:

It was a struggle to open up and be vulnerable for Nikki. She didn’t really need to worry.. I felt she and Artem connected better than ever. They lost balance a bit towards the end of the performance, but it was a nice recovery. She still needs to open up even more, in my opinion. But, thankfully, she’s on the right track.

After Nikki & Artem received their scores, Tom announced they were safe for next week!

After the commercial break, we found out more results.

The next safe couple: Drew & Emma. Frankie and Witney were also told they were safe. The first couple in jeopardy: Nick & Peta. Terrell & Cheryl found themselves in jeopardy as well. Wow. The show decided to up the stakes here. Talk about pressure, especially for Terrell and Nick.

Drew had command of the dance. He’s still a bit awkward but you can see how hard he is working. Drew lost a bit of timing but the choreography was very difficult. He stayed in character, although he got a bit overzealous. But his confidence was there.

Nick had moments but, once again, he struggled. He really does try his best and really went all out. The samba content seemed to be where he struggled the most. The breakdown part went well, however. It was a hit and miss performance. Maybe finding out he was in jeopardy before he danced was more than he could handle.

This Paso Doble showed Victoriaâ€™s strength and competitive spirit. She stayed in sync with Val and the other dancers. Val has really evolved every season into a better teacher, choreographer and partner.

TO did okay. There is an ease about Terrell. Cheryl is a great teacher; Iâ€™m just not a fan of Terrellâ€™s. I think that it is humbling for him how Cheryl cracks the whip, just like one of his past football coaches.

Frankie really works hard. You can see he loves to dance and be a part of the show. This was so much fun to watch. He slightly lost timing but he was very entertaining. Who isnâ€™t digging Malcolm?

The final three couples then found out their fates.

The next couple told they were safe: Jordan & Lindsay. Lindsey & Mark were safe as well as Vanessa and Maks. These three couples danced with their minds at ease. How would that translate to their performances?

Last week wasnâ€™t Vanessaâ€™s best but she came back and showed why she’s a contender. She had a wardrobe malfunction but it only served to free her. It reminded Carrie Ann of Kelly Monaco from season one, who had a malfunction but kept dancing and ended up winning that Mirrorball trophy. So, who knows, maybe this malfunction is actually good luck.

We found out Jordan has some issues with his body from former injuries. The way Jordan danced, however, you wouldnâ€™t know it. He brings it every time he dances. His lines, his musicality are all perfection. Carrie Ann talked about how he dances in one continuous motion…a wave of gorgeousness. I guess that is why he was in Hamilton on Broadway.

This sci-fi style Argentine Tango was right up Markâ€™s alley. His choreography was creative and Lindsey played her part well. Everything was detailed with even the smallest movements. No matter how you feel about Mark he always brings excitement into the ballroom. And it doesnâ€™t hurt that his Season 25 partner â€” Lindsey â€” is amazing. For this stellar effort, they earned a perfect score. No wonder they were the final performance of the evening.

Dances were done. Three couples were in jeopardy. The first couple told they were safe: Victoria & Val.

It came down to Terrell & Cheryl and Nick & Peta.

The eliminated couple: Nick & Peta. Probably the right call but always a sad ending when the celebs have to leave the dance floor for good. But Nick will be there for his wife so the guy isnâ€™t really going anywhere.

Nikki: â€œMy Russian therapistâ€¦.â€
Tom: â€œI bet you by the end of the show you are going to want a restraining order.â€
Tom: â€œDuane Johnson, eat your heart out.â€
Tom: â€œOur next genre is ugly Bond movies.â€
Drew: â€œWe make awkward look good.â€
Len: â€œCarrie Ann is right for a change!â€
Tom: â€œSomebody retired their 9 paddle pretty quick.â€
Len: â€œCut it out those tiddly fingers.â€
Tom: â€œYou are staring at me and it is really freaking me out.â€

Dancing with the StarsÂ airs Mondays at 8/7c on ABC.

Lucifer Isn't Keen at First to "Welcome Back Charlotte Richards"