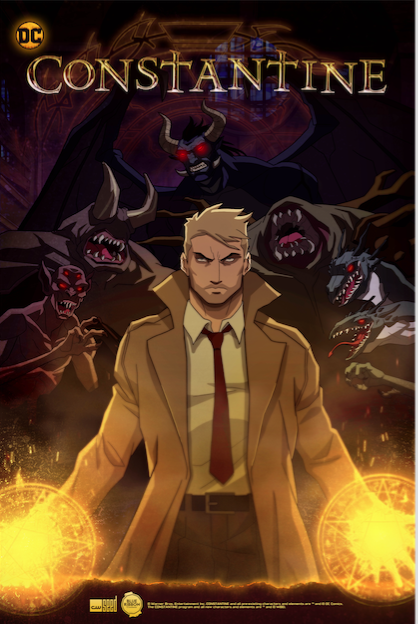 Ever since NBC canceled the live-action Constantine series after a brutally brief 13-episode run that ended in 2015, fans have been vocal about wanting more of the trench-coated occult detective, a character who became popular in comic book form first.

They were pleasantly surprised when star Matt Ryan reprised his role during an episode of the CW’s Arrow. In Season 4’s “Haunted”, his special skills were needed to help save Sara’s soul. You see, a dip in the Lazarus Pit tends to mess one up in a mystical sort of way.

And then earlier this year, it was announced Constantine would get an animated resurrection in a new series to air on the CW’s digital arm, CW Seed. And Ryan would be on board to voice the anti-social demon hunter.

Today the WB released the official key art for Constantine: More details on the series:

This all-new animated series from Warner Bros. Animation and Blue Ribbon Content follows DCâ€™s popular comic book character John Constantine (voiced by the live-action series star Matt Ryan), a seasoned demon hunter and master of the occult. Armed with an arcane knowledge of the dark arts and a wicked wit, he fights the good fight. With his soul already damned to hell, heâ€™ll do whatever it takes to protect the innocent. With the balance of good and evil on the lineâ€Ž, Constantine uses his skills to face the supernatural terrors that threaten our world and send them back where they belong. After that, who knowsâ€¦ maybe thereâ€™s hope for him and his soul after all.

ConstantineÂ will make its debut on the CW Seed sometime in early 2018.

And a major heads up for those Constantine fans who are currently at New York Comic Con. A three-minute sneak peek of the series is set to run at the beginning of the WB block of panels on Sunday, Oct. 8. This all goes down starting at 2PM eastern in the Hammerstein Ballroom.

The Killing Gets a Third Season