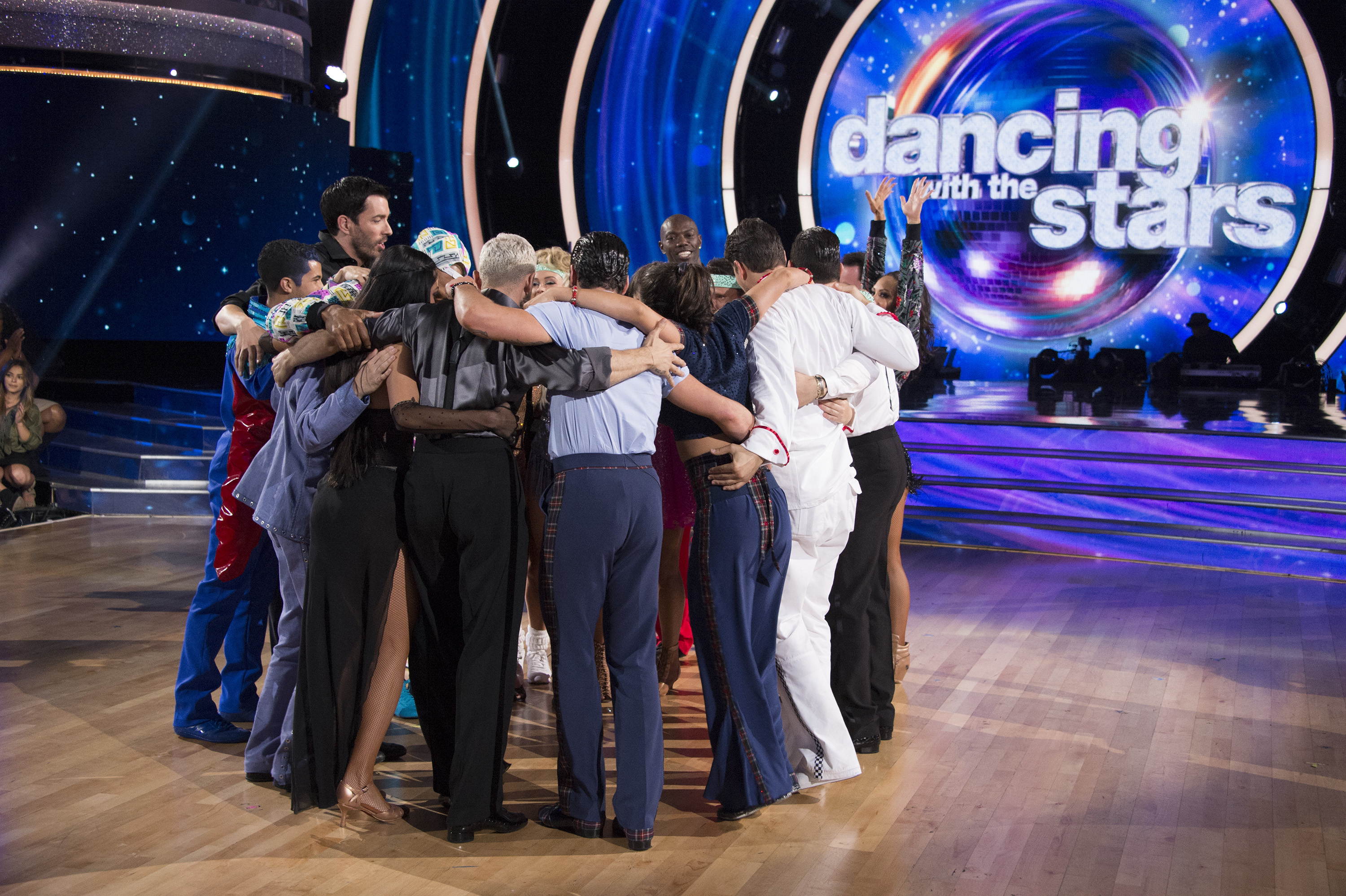 DANCING WITH THE STARS - "Episode 2503" - The 11 remaining celebrities dance to celebrate those things in life that give them pleasure - which no one else really knows about, as Guilty Pleasures night comes to "Dancing with the Stars," live, MONDAY, OCTOBER 2 (8:00-10:01 p.m. EDT), on The ABC Television Network. (ABC/Eric McCandless) THE CAST OF DANCING WITH THE STARS

In this scary time, sometimes you need a time out. Thank you DWTS, for the distraction.

There was no elimination this week after two celebs went home last week â€” Shark Tank’s Barbara Corcoran and pop star Debbie Gibson. Letâ€™s see how everyone did:

So far Property Brother Drew Scott is improving every week. The only issue I had with this dance: I saw a little bit of a lack of body contact but, otherwise, it was well done.

Derek Fisher looked like he was having the time of his life. He had a small misstep because he missed grabbing Sharnaâ€™s arms. Derek has definitely improved but the big smile on his face really made it very entertaining.

Victoria Arlen was scared of this dance. She didn’t need to be, however. Her quickstep was joyful and outstanding. Since she has no feelings in her legs, Val has to do some small tricks with her. But nothing he does is out of the rules of the competition.

Maks was out this week so Alan Bersten filled in. Vanessa has shown she knows how to dance. So when she performed alongside the troupe girls, Len said he couldnâ€™t tell who was the non-professional. I agree with this statement.

Nikki’s fearless and really goes for it. Her technique is getting sharper and she definitely has the performance down. Len said it was too aggressive. Maybe it was. But I could see that it worked with the character and the music.

Am I the only one falling for Frankie Muniz? I know it’s not just me. I donâ€™t know why but I love that he loves boy bands. I didn’t totally love his dance. The Samba content wasnâ€™t that great. He barely had hip action but his boy band moves were on point. That’s for sure.

The Jive is so difficult but Lindsey Stirling managed to make this a fun dance. She kept up with Mark’s choreography all the way through. Len said it was the dance of the season. There was lots of content but, at the same time, it was fresh and new.

This Sasha Pieterse/Gleb Savchenko jazz performance was a little boring for my taste. I didnâ€™t think it showed her off as a dancer. I just felt like it was half-hearted and she did better last week.

After being in the bottom two last week, Nick Lachey wanted to come back stronger. This time around, he was much looser. He really got into it. So much so he even wore a leotard. That takes balls!

Terrell Owens missed a few moves when he was performing with the rest of the dancers his partner Cheryl Burke included in the number. Confidence is a great thing but I think Terrell needs to work on not being overconfident. As far as I’m concerned, that’s when people start making mistakes.

I loved it. Thereâ€™s nothing bad about this number at all. Unless you’re Len Goodman who sees something different. He felt there wasnâ€™t enough Charleston moves in the dance. As judge Carrie Ann Inaba pointed out, they did the fastest Charleston that has ever been seen.

Tom: â€œHow was your Argentine Tango with him?â€
Tom: â€œAt least you didnâ€™t do a rotary dial.â€
Tom: â€œIf I can address kids. When you see someone different at school, donâ€™t be an ass!â€
Carrie Ann: â€œThe way you mounted upâ€¦.â€
Len: â€œI wasnâ€™t transported to old Vienna.â€
Len: â€œMy guilty pleasure is sitting in the California sun eating bacon and eggs, naked.â€
Erin: â€œI want that played in all night long.â€
Tom: â€œWhile we return the bed back to Ikeaâ€¦.â€
Tom: â€œApparently the Jane Fonda yard sale went well.â€
Tom: â€œSometimes he praises and then you feel like you need a shower.â€
Tom: â€œThere is Keo putting Jena through the spin cycle.â€
Len: â€œI donâ€™t want to be grumpy on the last day.â€
Tom: â€œOne of Lenâ€™s guilty pleasures: getting booed.â€

Since there was no elimination this week, no sadness or heartbreak.

Let’s get back to Guilty Pleasures, whatâ€™s yours? Not that you asked but mine are soap operas. But I donâ€™t really feel guilty about it so does that mean itâ€™s not a guilty pleasure?

Enough about me. Make sure you vote because you never know who will go home next. We have a lot of people in the middle of the pack right now so this could really be anyoneâ€™s game. The best dancer doesnâ€™t always win.

See you next week.

Dancing with the Stars is on Monday nights at 8/7c on ABC.

The Walking Dead “No Sanctuary”