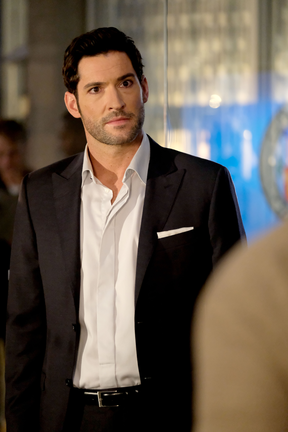 Lucifer burst back onto our screens this week without missing a beat after an eye-popping finale closing scene where he awakens in the desert with wings intact and unfurled.

Having sent his mother into another dimension, he had also managed to simultaneously rid the mortal body of Charlotte Richards of that pesky goddess-of-all-creation possession whose adventures had stolen a good portion of her life. Although, to be fair, Charlotte had been murdered before Mumsy had taken up residence so it’s probably a fair trade since she gets to live.

Season Three kicks off with an intriguing long arc mystery, a new police lieutenant, and another setback for the Deckerstar shipping.

The premiere’s main case is that of a body found in the desert near where Lucifer had awakened. It tracks through a few red herring leads to a kidnap-for-hire service and a good buddy of the victim, Josh Hamid (Pej Vahdat, Bones), who was looking to punk him in the most recent turn of an ongoing prank war between them.

Hamid’s first contact scene is painfully awkward as he believes Decker and Lucifer are part of another prank. He makes lewd comments about Decker and then makes a lame escape attempt. I wasn’t sure I could roll my eyes any harder. Until Lucifer tosses him off of his rooftop into his pool. That was epic.

Michael Gladis (Mad Men) always draws my eye for some reason and when he showed up at the crime scene in a seemingly throwaway role, it struck me as strange. But there’s a bit of a theme of incidental people turning up again, beginning with the driver of the armored car that Lucifer commandeers. So when Gladis turns out to be the incidental cause of the victim’s death, it wasn’t exactly a bolt out of the blue.

The question of who the mysterious “Sinner Man” is and what his purpose in hiring someone to kidnap Lucifer is fascinating as the possibilities are, literally, infinite as he could be anyone from a nefariously-minded demon to God Himself.

In the midst of this mystery, it’s heartwarming to watch Lucifer trying to make amends with Dr. Linda and even his scenes with Amenadiel serve to remind us how far our favourite fallen angel has come since getting involved with Chloe and her life.

The new lieutenant, Marcus Pierce (Tom Welling, Smallville), cuts a swath (with no little bloodshed) through our usual players at the precinct. Both Decker and Espinoza feel the sting of his words although Ella is absurdly giddy to have him on board. Although it doesn’t make a lot of sense that she doesn’t see how he treats her co-workers, ultimately, that’s okay, Ella giddy makes me smile.

(Also the cuteness of her flirting with Big Brother Amenadiel was such a Moment of Goodness. Forget Deckerstar, I’m all about Amenadella.)

Meanwhile, Lucifer’s experiencing some disturbing personal changes even beyond the wings that keep growing back and unfurling at inopportune moments. When he finally sits Chloe down for a true heart-to-heart, he tries to make it a genuine face-to-face by revealing his “Devil Face” to her but it’s apparently gone, leaving him with “Severe Constipation Face” instead and her feeling let down emotionally yet again.

It’s great to have this show back and with an expanded season, I’m eager to reconnect and explore some new twists on these familiar relationships and some familiar chemistry in the new relationships. Plus, more Trixie, please.

Nothing is as it Seems in Preacher “Dirty Little Secret”