Preacher Opens New Doors with “On Your Knees” 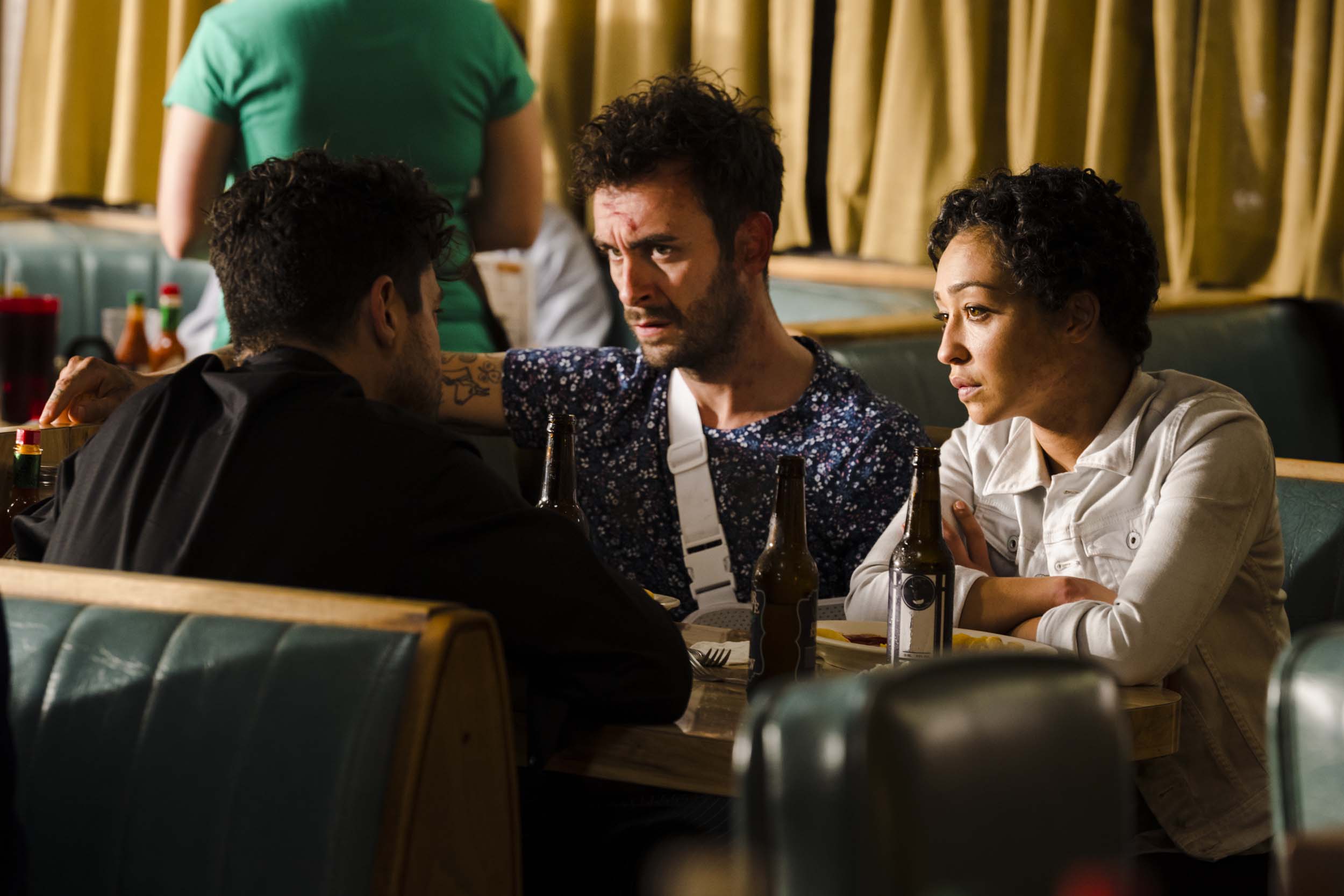 Jesse is at his wit’s end after finding God in “Backdoors.” After a whole season of searching for the Almighty, he is conflicted about everything that he’s learned from Herr Starr. With a Messiah who is unfit to serve, and that’s putting it mildly, Jesse is turning over Starr’s proposal in his mind about actually becoming God. But the closer he gets to making a decision, the further and further apart he becomes from Tulip and Cassidy.

Humperdoo, the descendant of Jesus Christ, is next in line to take over, but he can barely form a coherent sentence. After losing his temper with Cass in “Puzzle Piece,” it is clear that Jesse is attached to the idea that we need God because someone needs to be in charge or chaos will ensue. However, in just two episodes, Jesse has moved from finding God to taking over as God. But there’s no conviction in his declaration. He tells Tulip and Cassidy that somebody’s got to do it and it’s going to be him. The three of them fought last week over Jesse’s selfish tendencies, but he’s still surprised when his two friends refuse to support his new course of action.

Whether he thought he was protecting them, or whether he truly is as selfish as they believe, Jesse’s been keeping a lot of things close to his chest lately and everything appears to be coming due. After Tulip learned that he lied about the Saint, she’s been on edge since his escape. Yet even after the man from her nightmares returns, she still jumps into action to fight him off the love of her life. She knows Jesse better than anyone in the world, and more than anything, she’s most hurt that he keeps lying to her.

Jesse’s reckless attitude has finally caught up to him. When he should have been making moves to get out of the Saint’s path, or at least preparing for his inevitable return, Jesse’s arrogance and his ego have kept him one step behind. So when the Saint returns, and Jesse tries to casually use Genesis on him, he has no back up plan when that fails. What is unclear in this episode is what exactly The Grail did to the Saint to block his ability hear/be affected by Genesis.

The audience, me included, severely underestimated just how powerful Starr and The Grail are. Not only did they pull the Saint in as a player for their side, they also double crossed him by calling in hell to come and collect its beast. The cold blooded cherry on top is when the Saint flexes his muscle and tells the Superintendent that he will never see heaven and he doesn’t have to abide by hell’s demands. She corrects him by saying with no God in heaven to stop an uprising, they could put his wife and child in his cell instead of him. Given the problems that hell is having with overcrowding, it’s hard to know how much truth their is to her threat, but it was believable enough to stop the Saint from scalping Jesse. “You’re lucky to have someone like Herr Starr looking out for you,” she whispers to Jesse after the Saint leaves in the custody of her goons. Not only does Starr have The Pope on speed dial, but he’s also apparently close enough to Satan to call in favors as well.

For all their posturing, hell is a mess. No one knows how the Saint escaped; the cells aren’t working properly because they can’t figure out who should not be there; and after “On Your Knees,” both Hitler and Eugene will have escaped as well. After making their move against the Superintendent, Hitler talks Eugene through how to beat his personal hell which leads to a new exit, or back door, appearing. Eugene finally told Tracy how terrible of a person she is, and he got the approval from his father that eluded him in real life — both of which were well earned redemption moments for the kid who doesn’t deserve to be in hell. But, just on principle, I can’t get behind Hitler finding any sort of way out of hell. Sure, it’s just a TV show, but Hitler doesn’t deserve a respite in real life or fiction.

There are a lot of loose ends that still need to be tied up, but Preacher is poised to end on a high note like it started with in this second season. “On Your Knees” introduced new information that allowed the audience to find some modicum of likability in the Saint. Tulip and Cassidy’s exit after Jesse promises to take over as God coupled with Herr Starr’s deep pockets and connections has opened a whole world of possibilities.

I am definitely looking forward to next week’s season finale to see how this roller coaster of a season will wrap up its story lines.

Game of Thrones “The Iron Throne”