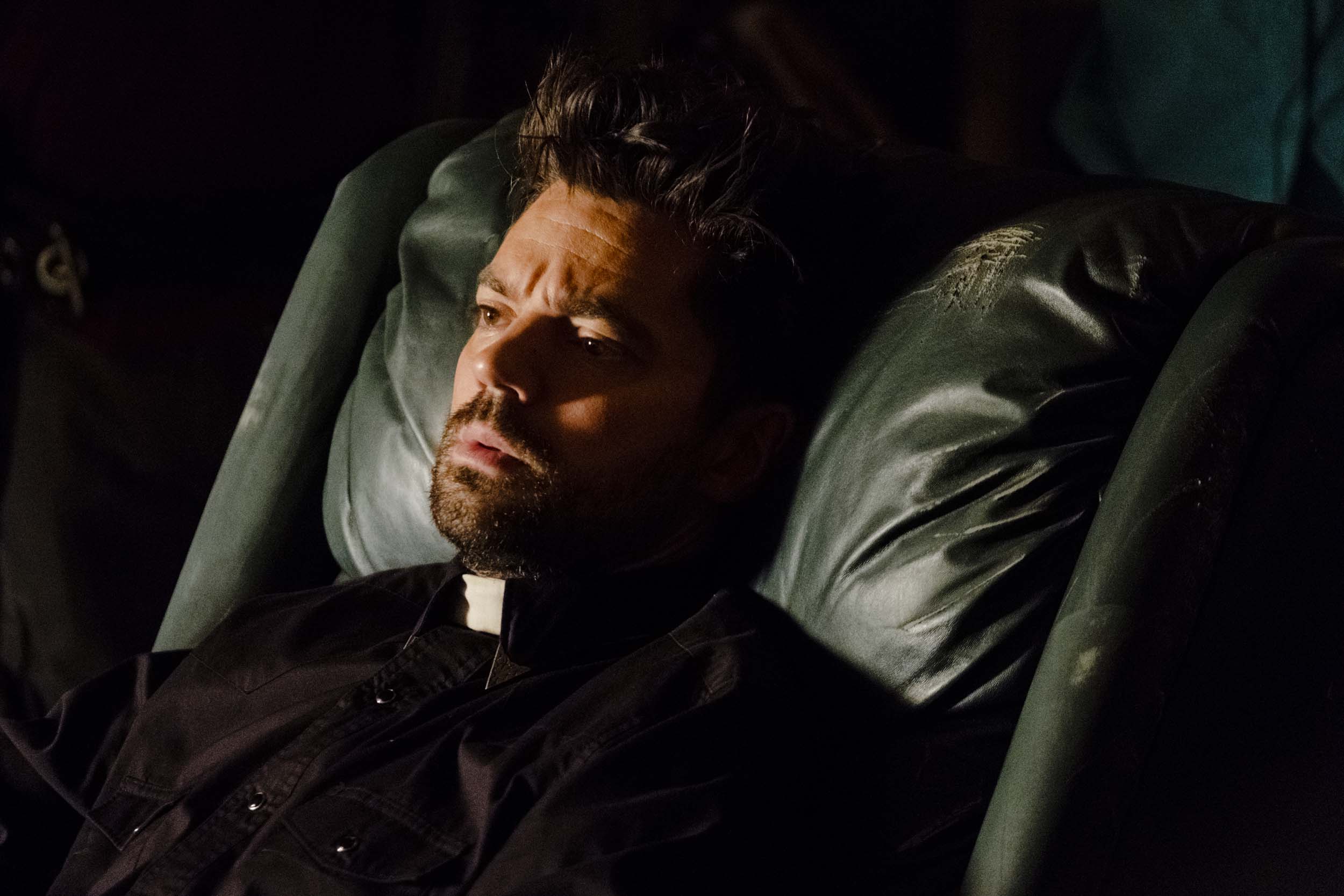 “On Your Knees” carries on the serious tonal shift that began with “Backdoors.” As the penultimate episode to a fractured second season, Preacher feels like it’s ramping up for something massive in the season finale. After meandering about with the inmates in hell for 11 previous episodes, we’ve finally started to see something different by way of progress.

Many of Preacher‘s signature elements are on full display in “On Your Knees.” Repetitive sequences/dialogue, fun stunt choreography, laughter and inappropriate jokes, and over-the-top violence are some of the many highlights. Carrying on from the new information revealed in “Backdoors,” Jesse and Herr Starr move even deeper into their distrustful and turbulent relationship. Starr is so sure that Jesse will eventually embrace his plan that he’s begun to funnel much of The Grail’s resources to make sure Jesse is taken care of.

Starr’s hands are in everything. Last week’s episode revealed that Starr had Hoover collect the Saint before Jesse could, and we saw that he and The Grail have come to some sort of agreement. If you thought releasing the Saint seemed counterproductive to Starr’s plans for Jesse, “On Your Knees” delivers a plot twist that proves just how connected Starr is to all the important players.

An exceptionally bright spot in this week’s episode is The Saint of Killers himself. We’ve always known that his wife and daughter succumbed to their illness because he could not return to them with medicine fast enough. We know that he’s the most feared man in all of creation, but we finally get to see the turning point that made his mortal life complete. He’s followed Jesse and done even more unspeakable things in the hopes of seeing his wife and child again; and for someone who was fooled with the promise of heaven once, there’s still something that can be used against him when leveraged properly.

Starr doesn’t seem like a man who is quick to anger, but his patience with Jesse (even after the above clip) is unnerving. How much is he willing to endure in the hope that Jesse will be swayed to take over God’s duties? And if the series stays in line with the comic, what will Starr’s wrath look like if Jesse’s stubbornness wins out above all else?

“Backdoors” also teased some of the horror’s Jesse’s grandmother put him through after the death of his father. Without significant elaboration in that episode, what was the relevance of divulging that L’Angell family secret? Being in New Orleans, he’s awfully close to his past, and has even run across flyers and practices that hint at a family reunion. As gruesome as his past may be, could his deranged family have some part to play yet in the whole God debate?

As for our trio, their survivability as a singular unit is not looking good. After their bust-up in “Backdoors,” where Tulip and Cassidy inform Jesse that he’s the selfish one, the divide grows even larger with the new information that is brought to light in “On Your Knees.” Starr’s plan to isolate Jesse just might be his most effective weapon to bring Jesse into the fold.

Preacher “On Your Knees” airs Monday, September 4th at 9/8c on AMC.

What They Said: Three Revealing Conversations from Survivor's Remorse "Closure"