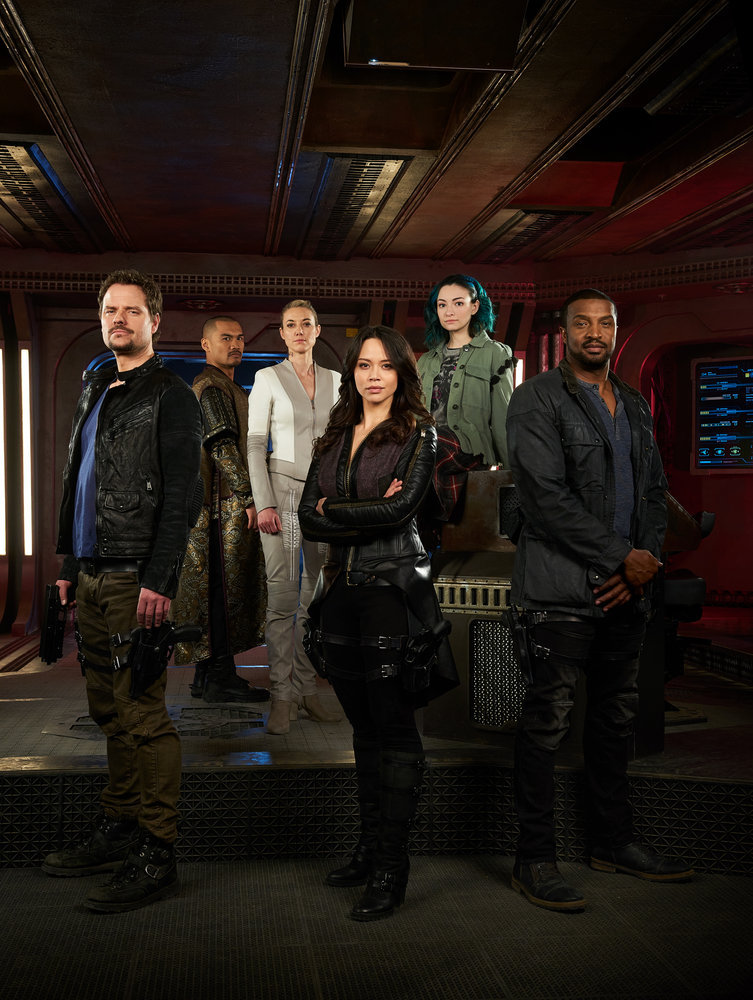 Bad news for fans of Syfy’s Dark Matter. The alien invasion set up in the season three finale won’t be resolved anytime soon.

In a blog post he tweeted today, Dark Matter co-creator Joseph Mallozzi confirmed the change in the show’s status: “To say that I’m incredibly disappointed would be an understatement,” he said.

This brings to an end the channel’s fierce summer Friday night lineup of Killjoys, DM and Wynonna Earp. However, both Wynonna and Killjoys will live on. Today Killjoys earned itself a final two-season order. Â Wynonna Earp was renewed for a third season earlier this summer.

Thank you for 3 phenomenal seasons #DarkMatter.

As usual, there’s a bit more to say, but I’ll need a minute.

Sometimes when you’re sad you just have take selfies with cute makeup and cat ears pic.twitter.com/ohFaxJhxcI

Let me give a proper sign off one last time..

So much love to the cast & crew @BaronDestructo @Ivonbartok & to every single one of you who watched us each week, we are forever grateful! https://t.co/y6w5nrc0hM

Dark Matter faithfuls have also communicated their disappointment in this cancellation news. They are expressing hope for a channel or network to save their show. One of the main targets, as always seems to be the recent case when a series is cancelled before its time, is Netflix.

#DarkMatter fans, go fill out this form at @netflix & let’s get the Raza on a REAL fan network! https://t.co/V0Uqyi9Sag

We hope Dark Matter can be saved. First of all, the third season ended on a massive cliffhanger that needs to be resolved. The Black Ships were a part of Old!Five’s prophecy as told to Android. There was so much more of that future we needed to see play out.

This is a show that improved in quality with each season. It managed to dole out mind-blowing surprises and twists; served up heavy doses of humor as well as high intensity action scenes; introduced alternate realities and tech toys like the blink drive; and didn’t skimp on the deep and emotional character-driven stories in the process. And it permanently disposed of characters like One and Nyx and made those deaths count. Not always a popular thing to do.

The character development from the first season to the third season was impressive for each of the individuals who made up the Raza Crew: The show stayed its course and took risks like actually making Four/Ryo a full on villain once he chose to get his memories back. The beautifully told HumAndroid story featured powerhouse acting from Zoie Palmer.

A nanite-powered Two struggled with becoming a leader when her instincts told her she was anything but a hero. Three, who was damaged and sarcastic and was all about himself, ended up having one of the true love stories of the series, even though it was ultimately with a Sarah who existed in digitally conscious form. Six’s redemption from betraying his friends at the end of the first season was slow but successful. And Five, the youngest crew member, arguably ended up the strongest, most badass one of them all.

We need to give major respect to the cast who was able to pull all of this off. Their chemistry was evident from day one and only became more integral to the action as time went on. Plus, they were as passionate about the show as everyone else, which makes this news that much more crushing.

It’s sad that this story is going to end in the middle of the book without a chance to even wrap things up right.

R.I.P. Dark Matter. May you find new life in the future.