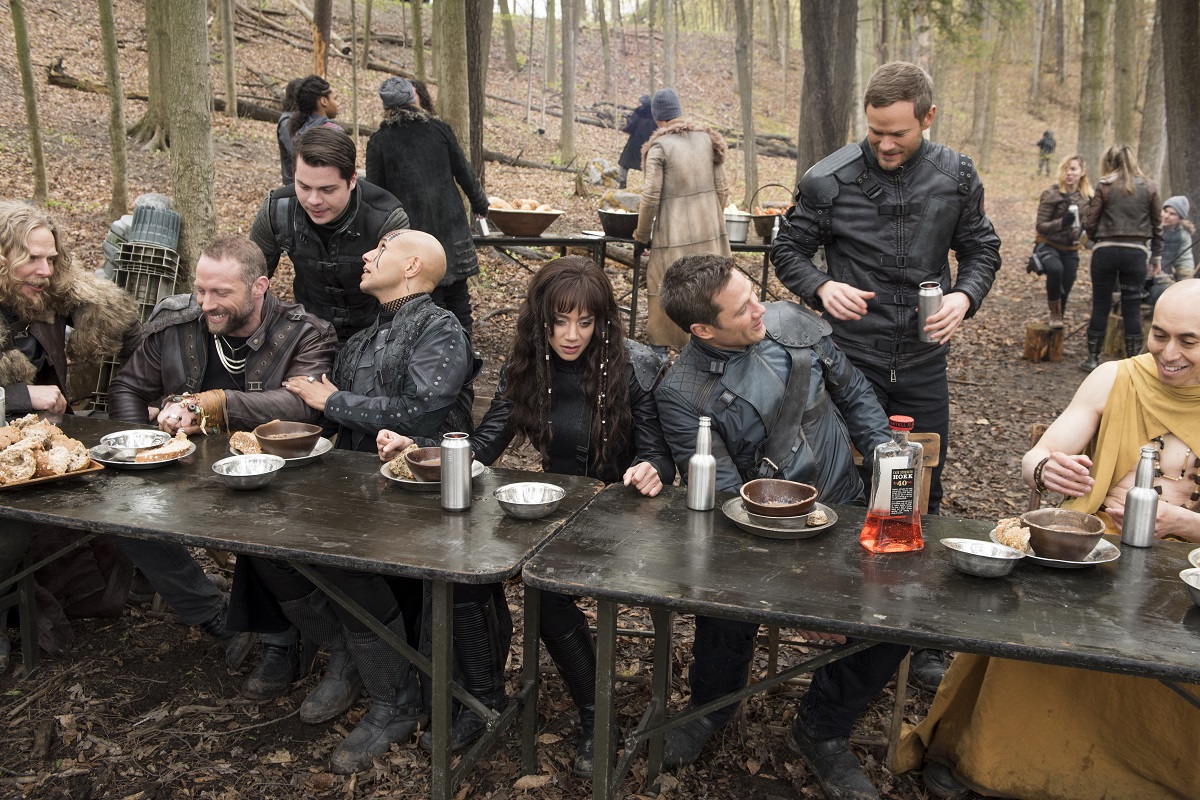 WOOOOOOO!!!! After sweating it out (and making me super nauseous this afternoon), Syfy and Space have renewed Killjoys for two more seasons ahead of tonight’s Season 3 finale, with the series set to wrap at the end of Season 5. Here’s the press release.

SYFY and Space announced today the pickup of Seasons 4 and 5 of the sci-fi adventure series Killjoys ahead of its action-packed Season 3 finale airing tonight at 8/7c. The two-season, 20-episode pickup will act as the final chapters for the fan-favorite space drama. From Temple Street, a division of Boat Rocker Studios, and Universal Cable Productions (UCP), KILLJOYS follows a trio of interplanetary bounty hunters, rebel leader Dutch (Hannah John-Kamen), tech-savvy John Jaqobis (Aaron Ashmore), and tactical D’avin Jaqobis (Luke MacFarlane), on the brink of a multiplanetary war. Creator Michelle Lovretta serves as executive producer along with Karen Troubetzkoy and Temple Street’s David Fortier and Ivan Schneeberg. Season 4 is set to air in 2018.

“Helmed by Lovretta and driven by the superb storytelling, we are excited to bring KILLJOYS back for two final seasons,” said Bill McGoldrick, Executive Vice President Scripted Development for NBCUniversal Cable Entertainment. “Tonight’s game-changing season finale sets the tone for the final chapters of our bounty hunter’s space adventures and we cannot wait for our talented cast and crew to bring to life what is sure to be an epic journey that will leave our passionate fans on the edge of their seats.”

“A final two-season order is a huge vote of confidence for a show that keeps getting better and better,” said Fortier and Schneeberg, co-presidents of Boat Rocker Studios and executive producers of Killjoys. “We are so proud of the support KILLJOYS has received from critics and fans alike, and are thrilled to plan a deserving ending for Dutch and the Jaqobis brothers; it has been an incredible intergalactic journey and we could not have wished for better partners to share the ride.”

“This renewal is the kind of privilege every creator hopes for, a chance to plan the end of your story with the luxury of 20 episodes to do it,” said creator and executive producer Lovretta. “I’m immensely grateful that both of our network partners – along with Temple Street and UCP – have given our team, cast and fans this incredible opportunity.”

Killjoys airs Fridays at 8/7c on Syfy in the US and Space in Canada. Come live Tweet! Check back after the East Coast air for my new exclusive interview with showrunner Michelle Lovretta. Click here if you’ve missed any of our exclusive interviews this season.

Also, we have to note, Killjoys‘ three-season companion Dark Matter was cancelled today. We’re very sorry to see it go, and absolutely hope it will be shopped to other outlets.