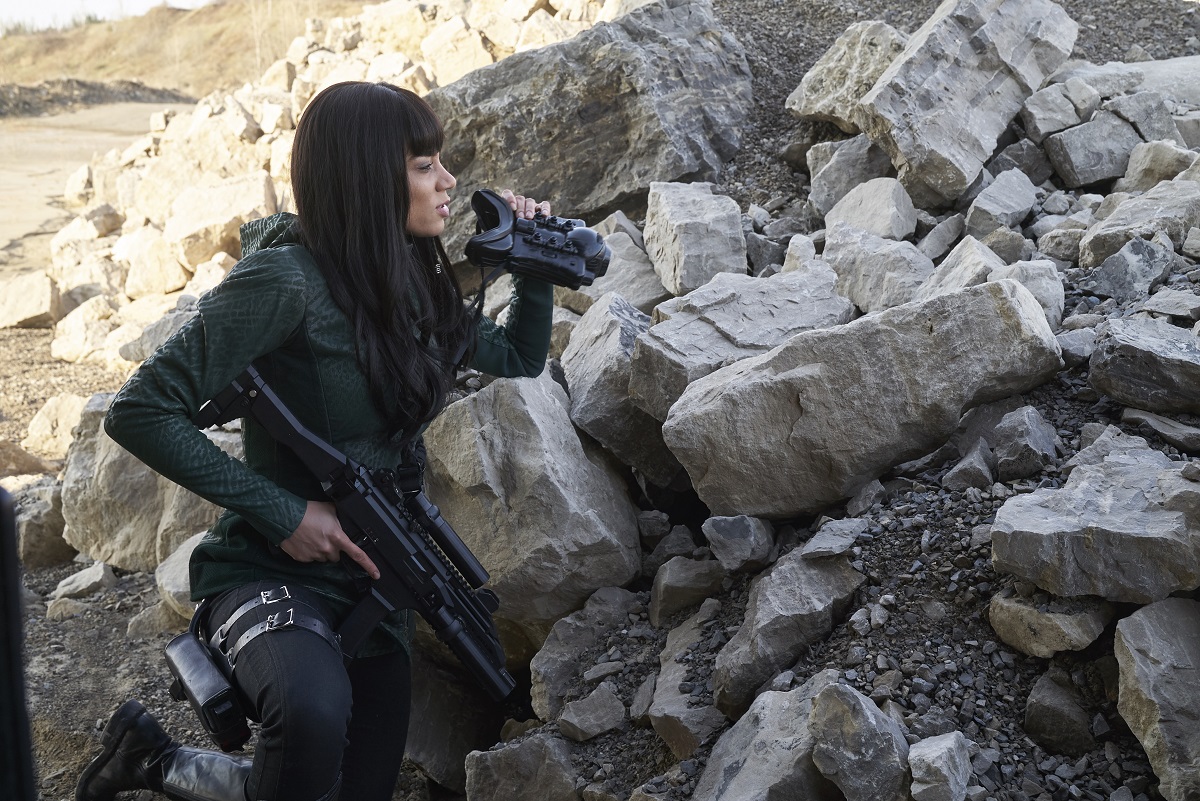 Friday’s Killjoys enjoys a little team reconciliation over an old-fashioned grab-and-go job that of course doesn’t go exactly as planned, but it’sÂ fun as hell to watch them try.

Johnny is still fretting over what he can and can’t do with the black ships until he and D’av hammer out that they need an assist from something not currently in their possession. Dutch takes a break from Zeph, who’s doing her own fretting about the genetic implications of last week’s reveal, to give the boys a hand.

They’reÂ thrilled to have her back on board, but also more than a little concerned about her new happy-go-lucky attitude. They’re also surprised to have some help from a slightlyÂ domesticated Jelco (Pascal Langdale).

Up on the SS Batshit Aneela, Gander is having the Worst. Day. Ever. as Aneela redefines excessive force when she breaks, unbreaks, and re-breaks him trying to find Delle Seyah.Â We also find out that Aneela might possibly have someone in the chain of command who’s even more terrifying than she is.

The episodeÂ is the firstÂ written by Motive alumniÂ Julie Puckrin, who joined the Killjoys staff this season, and there are several scenes–hilarious and heartbreaking–that are just a Valentine for the D’av fans (guilty!). We also learn a few more of “Pree’s Rules of the Bar” andÂ get more fun with crew-associated weapon naming.

It’s directed by April Mullen, who helmed last season’s “Heart-Shaped Box,” this season’s Wynonna Earp, and the fantastic upcoming WGN Canadian import, Bellevue. I have to call outÂ the A+ costume choices from Trysha BakkerÂ inÂ theÂ episode, I’m so glad we’re getting to go a little goofy before we most likely have to chew our fingernails off in the final two episodes.

KilljoysÂ airs Fridays at 8/7c on Syfy in the US and Space in Canada.Â Come live TweetÂ and start tagging those Tweets with #RenewKilljoys!

Here areÂ a couple of sneak peeks of â€œHeist, Heist, Baby.â€ Click here if youâ€™ve missed any of our exclusive interviews this season.

Dutch is acting a little…different.

Get ready for a new #Killjoys FRIDAY at 8/7c on @SYFY & @SpaceChannel. pic.twitter.com/e4z9avs9H9

The Knick Preview: “Where’s the Dignity” [VIDEO and PHOTOS]