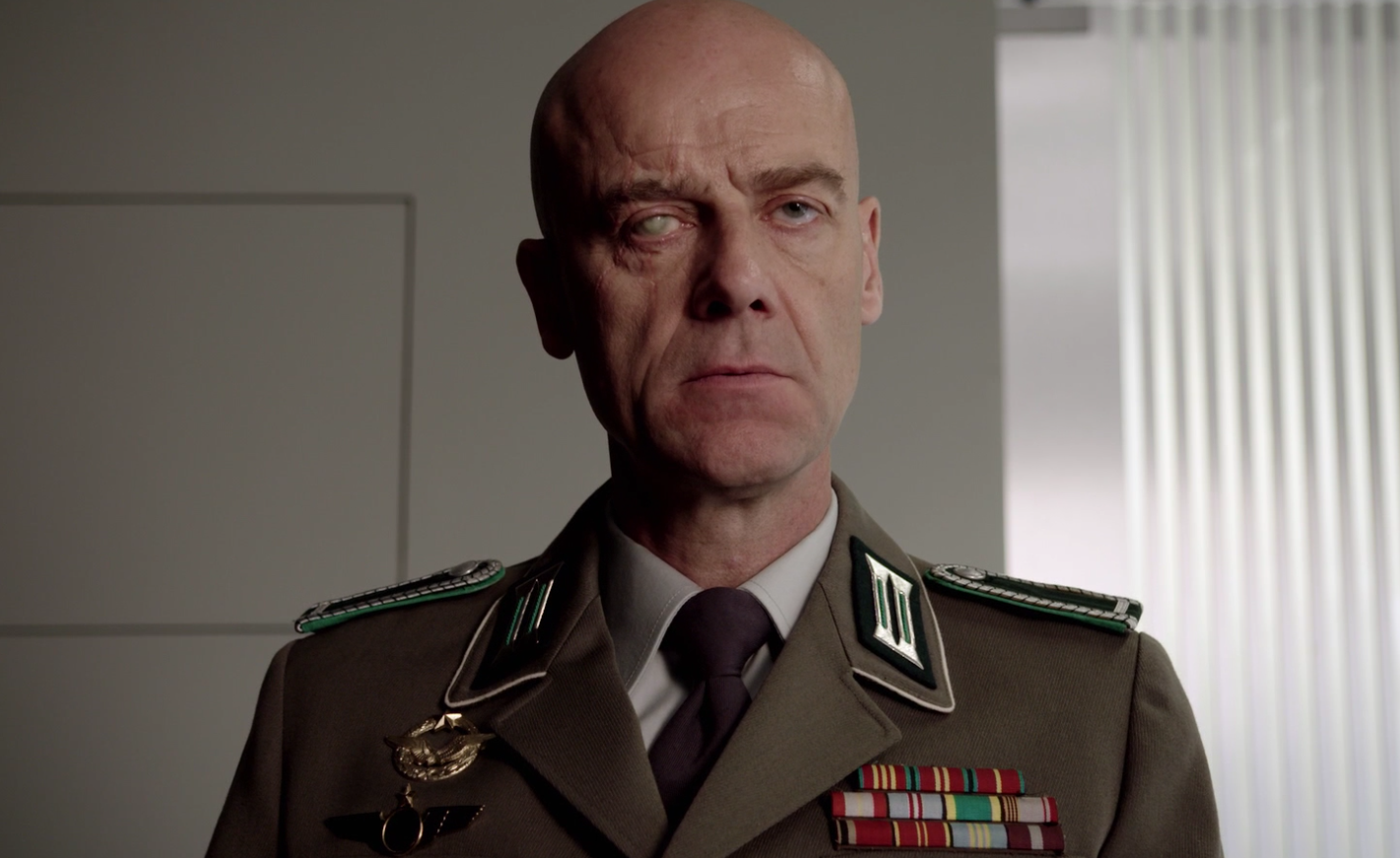 “Pig” may well be the slowest episode of the season so far in Preacher terms. Of course, if we can call getting shot in the chest, epic flashbacks, nightmares, and waking up in a morgue drawer slow. TThe change of pace offset the rip-roaring speed at which the season is flying by, but there were some glaring missteps. The first Tulip dream sequence was a little too noir for what the series has done so far; and poisoning the Vietnamese villagers (and their meat balloon pig) seemed unnecessarily offensive. Wouldn’t killing just the pig have sufficed?

This week the three main characters are struggling with their own demons, and they handle it in their own dysfunctional way. Cassidy drowns his issues in alcohol, Tulip hides her fear with pain, and Jesse covers up his insecurities by lying. It’s interesting to see them all at their most vulnerable.

While they try to sort out their demons, Herr Starr’s long awaited introduction claimed most of the air time. The flashback to how he became the head of the Samson unit of The Grail is filled with oddities, deadpan perfection, and more than one zinger that left us in stitches.

The crÃ¨me de la crÃ¨me of those one-liners was Starr’s response to being told that this organization and his beliefs aligned. Without missing a beat, he matter-of-factly replies with:

This comes after he confesses disappointment that his hotel stay is not what was promised. “I was told there would be women,” he begins, “a high end brothel filled with Ukrainian runaways.” The presence with which he speaks the truth, regardless of how inappropriate especially given this interview-esque setting, let viewers know exactly the kind of person he is.

The entire sequence of him going through the rigorous trials progresses with each segment being better and more awkward than the one before. The oldest man being tested, he stands unwavering in his conviction among men with twice the muscle mass and fewer nipple piercings. There’s another break in the tension when, naked, he asks if they validate parking. Because if he had known that it would cost 12 pounds per hour, he might not have come at all. The Grail executive in charge (Fredric Lehne) is continuously impressed with Starr’s actions.

After deploying a publicly disturbing “distraction tactic” to get out of a choke hold, he continues to best his opponent in each task. When there are only two remaining, Starr does what any megalomaniac with a loaded gun would, and kills the competition. But even that wasn’t enough. After learning that Jesus fathered a child and The Grail has been protecting said child in preparation for the apocalypse, he finally accepts a role as second in command.

However, that will not suffice either, and it’s no surprise that Starr assumes command after shoving the leader over the railing of the top floor of the building. So that’s where he got his start, and in present day, with the pig eliminated, Starr’s next false prophet targeted for removal is none other than Jesse Custer.

His goal, as stated at the beginning of the episode is to, “Sweep the streets clean of the parasites that befoul our society, and create a civilization based on the principles of absolute order and uncompromising discipline.” How closely will the series follow the comic with Starr’s storyline? Because we can think of a few ways he might find Jesse’s power useful to fulfilling his desires.

Preacher returns next week with its 8th episode, “Holes.”

Game of Thrones "The Queen's Justice"

Moment of Goodness: Ben and Nick’s Awkward Conversation, Jane by Design “The Lookbook”